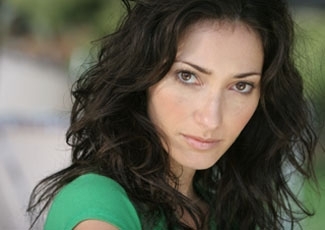 NEW YORK (JTA) – In what is likely to be remembered as the first YouTube presidential campaign, perhaps the most talked about video has been singer Will.i.am’s celebrity-dotted homage to the “Yes We Can” mantra of Barack Obama.

The video features split-screen images of several prominent celebrities, past and present, singing alongside clips of Obama’s victory speech in South Carolina.

For those listening closely and with an ear for Hebrew, it’s one of the lesser known, albeit just as eye-catching, performers who stands out: Israeli-born actress Maya Rubin.

Twice in the video, Rubin can be heard saying “kein anu yecholim” –- Hebrew for “Yes We Can.”

The video was released as the Obama campaign was laboring to rebut assertions that he is unfriendly to Israel and an e-mail campaign falsely painting him as a closet Muslim who attended a radical Muslim school, took his oath of office on the Koran and refuses to say the Pledge of Allegiance started circulating in the Jewish community.

Was Rubin’s Hebrew cameo part of the campaign’s effort to shore up Obama’s standing among Jewish voters?

No, director Jesse Dylan told JTA, insisting that he hadn’t even known about the smear campaign when he put up $10,000 to cover the costs of the two-day shoot.

“We just thought it would sound nice to have Hebrew,” said Dylan, whose father, the Hall of Fame singer Bob Dylan, became a legend with his politically themed music.

“There was no intention on anybody’s part,” he added. “I am a Jew myself and was unaware of the e-mails, and that was never a thought.”

Rubin, whose Hebrew line is now being used on pro-Obama campaign signs, said the video has played well with Jewish people she knows.

“People love it,” she says of her appearances in the video. “It was very subtle, which I think is even more cool.”

The fledgling actress was born in Jerusalem, served in the Israeli army and moved to the United States in 1998 to pursue her career.

Rubin, 28, starred in the Showtime movie “Milk and Honey,” has had guest spots on “CSI: NY” and appeared in several commercials.

She convinced Will.i.am, who has cited Anne Frank as one of his inspirations for the video, and Dylan to use her on the video based on her work on an unreleased Jewish rap album called “Chutzpah” she cut with some friends.

Though Rubin, who returns to Israel about once a year, studied political science at Tel Aviv University in Ramat Aviv, she says her knowledge of the other candidates in the presidential election is a little thin and that she is not fully steeped in Obama’s policies.

But she trusts him on Israel based on what she has read from information sheets she was given by Obama-ites.