Going the route on Passover 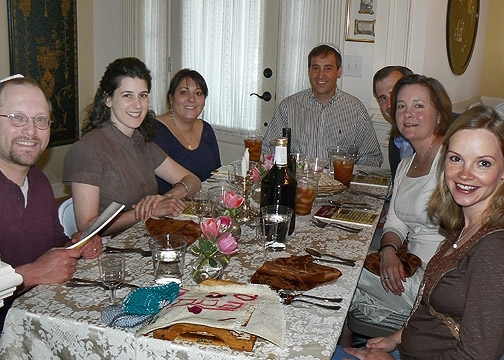 Rachel Pomerance, second from left, celebrates a Passover seder at "the kids' table" on April 20, 2008 -- but may be thinking about enjoying some chametz after the holiday. (Courtesy of Rachel Pomerance)
Advertisement

For a holiday celebrated by more Jews than any other for its universal theme of freedom and ease of celebrating at home, I only feel liberated when Passover has passed over.

Even before the holiday starts, the grocery store’s antiseptic aisles reserved for Passover begin to mock me with their sad cans of hearts of palm or those sleeves of nasty half-moon jellies that have been around for decades and probably take that long to digest.

Passover might not be so grueling if we didn’t go whole hog, so to speak. But as far as I can tell, my family of Conservative Jews becomes Chasidic for the week.

It seems like every meal can trace its heritage to a Manischewitz box or a package festooned with Hebrew markings. No corn syrup. No soy. No legumes. No strategic adoption of Sephardic customs so we can at least eat rice. Freezer paper covers every kitchen counter top, although toward the end of the holiday, it’s torn and splattered with memories of brisket and soup.

It’s not just the lack of good eating and digesting – although, yes, that’s a big part of the misery – it’s also the preparation. I’d bet that my grandmother, after decades of Passover cleaning and cooking for God knows how many people in her south Georgia synagogue, probably starts to feel beads of sweat forming at the thought of the labor involved in this holiday.

To quote my friend Larry, on the option of heading to one of those kosher-for-Passover resorts, “Next year in Miami.”

Admittedly I made myself scarce heading into Passover after last year’s duty. I was dispatched to the kosher butcher to pick up an order that could feed the Israel Defense Forces.

At the market, the yeshiva boys who worked there joked, “Oh, you’re the one picking up the cow!”

I couldn’t even look at the rows upon rows of ribs they loaded into the passenger seat of my car, stinking it up so that I had to roll down the windows to keep from passing out while it wobbled around next to me. I was like the kosher-for-Passover Fred Flintstein.

My parent’s pantry, normally stocked with health food, bulges with potato chips and chocolate-covered coconut macaroons at Passover. And since that’s what tastes OK, that’s what we eat for the week.

So we’re continuously eating to prevent the possibility of getting hungry – not that we’d know this because we’re so busy eating. And if we kosher-for-Passover Jews leave the safe haven, if we momentarily become untethered from the kosher kitchen, we carry around matzah or prunes or what-have-you because you can never be too careful.

I was eating one of those fruit roll-ups at work this week, working the plastic fruit away from the cellophane, when an office mate peered at me in confusion. Suddenly I was in middle school all over again defending my lunch.

But there are those rare and beautiful Passover foods that for me come down to the singular godsend of Temptee cream cheese. As a kid I waited all year for that hot-pink tub to grace our refrigerator shelf.

Now I have come to realize the dirty little secret about Temptee: It’s available all year. Turns out lots of Jews reserve treats for Passover – herring or sardines or gefilte fish maybe. I don’t know why. Maybe it’s to find something happy to eat during an otherwise bleak diet, or maybe it’s further evidence of the strange psychology that sets in during these eight days.

Last year, to avoid koshering my apartment and live amid the storehouse, I stayed with my parents. It was during an unfortunate decorating era in my bedroom where one wall was painted with a cloud-like theme. So atop the quasi-shame of staying a week with my parents as a thirtysomething, I felt like I was sleeping in a nursery.

This year I chose to kosher my place as best I could. In the hours before the first seder – always held at my aunt and uncle’s, who roll out the plastic carpet beneath folding tables for dozens – I scrubbed my refrigerator, counter tops and floor, vacuumed and laid out a few boxed items resembling food on paper towels on my dining table, sort of like my grandmother used to do.

I felt so proud I ate a chocolate-covered marshmallow twist. And then another.

Truth is, I actually enjoyed preparing for our seder this year. In readying for 16, my mother, father, brother, grandmother and I swapped shifts of cooking, cleaning, shopping and napping. And we laughed the whole way – at the sludge-like icing we tried to cover up with chopped pecans and the number of grocery-store runs and who we ran into at the kosher aisle and what was left.

I’ve enjoyed the homemade meals with friends and family.

But by the end of this holiday, I’ll join with an even larger family – nearly every Jew in America – over a slice of crusty pizza. I’ll have free rein of most of the grocery store. And I can dine in any restaurant the way I always do – slightly to the right of kosher style. I’ll have made my own exodus.