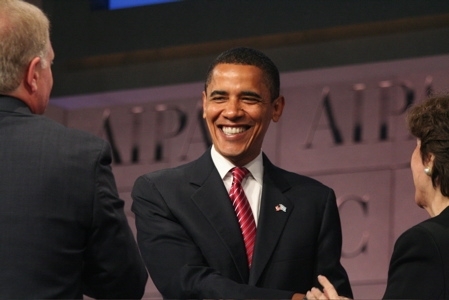 Barack Obama insisted that Jerusalem must remain Israel's undivided capital in his speech at the AIPAC forum on June 4, 2008. (Courtesy of Obama for America)
Advertisement

JERUSALEM (JTA) – Although Israeli officialdom is not commenting on the possibility of a Barack Obama presidency, in private some officials in Jerusalem are expressing mixed feelings about the prospect.

Some in government quarters are concerned that Obama, the presumptive Democratic nominee, might be soft on Iran, pressure Israel to make concessions on the Palestinian track and even change the tenor of the strategic relationship between Israel and the United States.

Israel’s left wing hopes that an Obama administration will be more hands-on in Israeli-Palestinian peacemaking, perhaps even pressing the parties into a mutually beneficial deal. By the same token, the right wing fears that an Obama administration and the Israeli government could be on a collision course, especially if the Likud’s Benjamin Netanyahu wins the next Israeli election.

Israeli officials noted Obama’s readiness to use force against Iran if necessary, his promise to maintain the Israel Defense Forces’ qualitative edge, his support for isolating Hamas and his commitment to Israel’s Jewish character, with Jerusalem as its undivided capital.

But the officials also offered two caveats. Although Obama, an Illinois senator, is saying all the right things, there is no way of knowing what he would actually do in office. Unlike his Republican opponent, U.S. Sen. John McCain (R-Ariz.), Obama cannot boast a long, unwavering record of support for Israel.

Second, some pundits argued that his commitment to a united Jerusalem was so obviously over the top that it cast doubt on the rest of what he had to say June 4.

Following harsh Palestinian reaction to his comments on Jerusalem, Obama clarified his remarks the next day, telling CNN that the fate of the city would be up to Israel and the Palestinians to discuss.

The main worry in Israel is over Obama’s readiness to talk to Iran. Israeli officials and pundits are concerned that the Iranians will play the Americans for suckers, building nuclear weapons under the cloak of ongoing negotiations.

In late May, the Foreign Ministry’s research department convened a meeting of ministry and outside experts to discuss “American foreign policy after Bush,” including the possible implications of an Obama presidency. The conclusion: Israel has no reason to worry regardless of who wins the White House.

The consensus was that because support for Israel is so strong in both Congress and American public opinion, no president would take a radically different tack.

Pressure on Israel is unlikely, the experts said, since the main focus in the Middle East for the new U.S. president will be Iraq and Iran, not Israel and the Palestinians.

On Iran, any U.S. administration will try diplomacy before using force, the experts agreed, including McCain. They also saw merit in Obama’s argument that if the United States negotiates with Iran in good faith and fails, it then would have far more moral justification if it resorts to force to destroy Iranian nuclear installations.

“I don’t think diplomacy and even direct negotiations are necessarily a sign of being soft,” one of the experts, Alon Pinkas, a former Israeli consul general in New York, told JTA. “I think it’s an avenue that if successful could be beneficial to Israel, especially since he’s not taking the military option off the table.

“I am not sure the Rambo – let’s bomb them back into the Stone Age – is necessarily a better policy.”

Pinkas noted two more reasons why Israel has nothing to fear from Obama. One, after the staunchly pro-Israel Clinton and Bush administrations, the classic conflict between pro-Israeli and more “even-handed” American policy is a thing of the past, he said. Two, Obama almost certainly will appoint an overwhelmingly pro-Israel Cabinet.

Where Pinkas does see a possible change in U.S. policy under Obama is on the Israel-Syria peace track. He thinks an Obama administration might make the Syrians an offer they can’t refuse, coaxing them to leave the Iranian axis and join the moderate pro-Western Arab coalition.

“If this is part of a grand U.S. strategy to isolate Iran, then it could be very much in Israel’s interest,” he said.

On the Israeli right, however, suspicion of Obama remains strong. Likud hawks are still seething over remarks Obama made to a group of Jewish leaders in Cleveland.

“I think there is a strain within the pro-Israel community that says unless you adopt an unwavering pro-Likud approach to Israel, then you’re anti-Israel, and that can’t be the measure of our friendship with Israel,” Obama said in March.

Likudniks recall the severe strains in relations between Israel and the Clinton administration when (then Prime Minister) Benjamin Netanyahu refused to make concessions to the Palestinians. They fear Netanyahu and Obama could be on the same kind of collision course with worse consequences, especially if it turns out that Obama does not share Clinton’s profound commitment to Israel.

Pinkas points out that the Clinton-Netanyahu tension resulted from Netanyahu’s allying with Newt Gingrich, the Republican speaker of the U.S. House of Representatives, against the administration. Netanyahu has not made the same mistake this time, having taken pains to establish good relations with Obama.

Perhaps more than anything else, the question of how the next U.S. president will relate to Israel may rest on another as-yet-unknowable factor: who will be Israel’s next prime minister.