A Jewish VP for McCain? 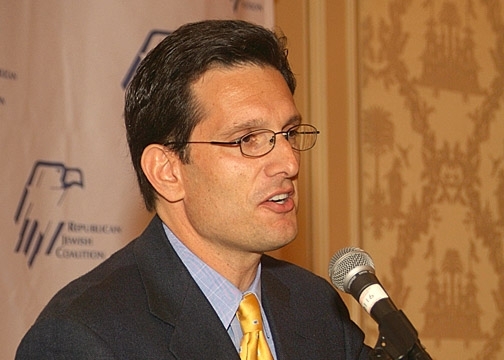 Pressed, however, these Cantor devotees admit there’s not much between those two constituencies that the Jewish deputy minority whip in the House of Representatives would bring to the race to keep the White House Republican.

“There’s a positive and negative to not being a household name,” said William Daroff, the top Jewish lobbyist here focused on domestic issues and himself a former Republican operative.

“The positive is that it gives him the opportunity to frame anew who he is and what he’s all about, a vision for the future. The negative is that other than helping him in Virginia and in some battleground states because of his Jewishness, he doesn’t have a proven national brand,” said Daroff, who heads the Washington office of the federations’ umbrella, the United Jewish Communities.

The campaign for U.S. Sen. John McCain (R-Ariz.), the presumptive Republican presidential nominee, has asked Cantor, 45, to present papers for vice-presidential vetting. Political insiders say Cantor is still a longshot, however. Most bets are on McCain’s rival for the nomination, former Massachusetts Gov. Mitt Romney, and on Minnesota Gov. Tim Pawlenty.

Cantor and his staff declined to be interviewed for this article. But even as recently as May, the only Jewish Republican in the House discounted suggestions that he would place on the ticket, giggling as he told JTA that such speculation was “ridiculous.”

Even the Republican Jewish Coalition, Cantor’s biggest booster, seemed skeptical that Cantor would be the VP pick, issuing a statement that sounded a lot like the “we were happy to just be considered” speeches delivered by also-rans.

“Regardless of what McCain decides, Cantor has a very bright future ahead of him,” said Suzanne Kurtz, the RJC spokeswoman. “He is an appealing and articulate leader for Jewish Republicans and all Republicans. As the GOP continues to make inroads in the Jewish community, it is a wonderful moment to introduce this rising star to a wider audience.”

Don’t count out Cantor or underestimate the impact he could make in the presidential election, said Rep. Roy Blunt (R-Mo.), who as minority whip functions as Cantor’s congressional boss.

Blunt said Cantor could tip the balance among Jews who are concerned about the pro-Israel credentials of the presumptive Democratic nominee, Sen. Barack Obama (D-Ill.).

“At a time when many Jewish voters who voted Democratic in the past are going to look carefully between John McCain and Barack Obama on Middle East and economic issues, Eric Cantor can add a real boost to what I already believe will be a significant hard look by Jewish voters at John McCain,” Blunt told JTA.

The McCain campaign has worked hard to draw distinctions between the two candidates on Iran particularly. Obama favors increased diplomacy, while McCain leans toward confrontation and isolation.

Polls already show McCain reducing the 75 percent to 25 percent edge Democrats have had in past presidential races among Jews to a 60-40 split favoring Democrats. That, Blunt said, could bring swing states with significant Jewish populations into play, including Florida and New Jersey.

Cantor already has served as an attack dog on Jewish issues for the McCain campaign.

He told JTA in May that he was confident that McCain, with his reputation as a foreign policy hawk and a moderate on social issues, would take a bite out of the Jewish vote.

“There is no doubt in my mind that the American Jewish community is going to register an unprecedented number of votes for the Republicans and Mr. McCain,” Cantor said, suggesting specifically that Jewish voters will balk at Obama’s pledge of direct talks with Iran.

In a statement sent to reporters, Cantor misquoted Obama as telling the Atlantic’s Jeffrey Goldberg that Israel was a “constant sore” in the Middle East. In fact, Obama was referring to the conflict, enunciating a view echoed by Bush administration officials, including the president himself.

Goldberg asked Cantor to retract the statement; Cantor has not.

That’s not atypical for the deputy whip, often the chief strategist in formulating political attacks. In 2006, Cantor launched a broadside against U.S. Rep. Nancy Pelosi (D-Calif.), then the minority leader, for her efforts to include consideration of Lebanese civilians in a pro-Israel resolution on the Israel-Hezbollah war that summer.

Cantor painted Pelosi as insufficiently concerned about Israeli civilians, even though the American Israel Public Affairs Committee had approved her language.

Cantor has a personal story that could prove attractive to Jews and conservatives. He’s always been close to his family, and apart from college years spent in New York – where he met his wife, Diana – has spent his life in Richmond working in the family real estate business.

He made his first run for Congress in 2000 after serving in the Virginia House of Delegates. His family has deep ties in the local Jewish community; his mother and wife are active in the local Hadassah chapter.

Cantor’s rise in Congress was meteoric. In 2003, during his sophomore term, he was named to the powerful deputy whip position.

One blip along the way: He benefited from the largesse of the disgraced lobbyist Jack Abramoff, taking more than $30,000 in campaign contributions from an operation eventually exposed for defrauding American Indians.

In 2006, after Abramoff pleaded guilty to fraud and corruption charges, Cantor gave $10,000 of the money to charity. In 2003, Cantor was briefly caught up in “picklegate,” when his campaign neglected to pay Abramoff’s kosher deli, Stacks, for a fund-raiser.

Cantor apologized, paid the $1,700 and was not sanctioned.

Those close to him credit his prodigious fund-raising skills for his rapid rise in Congress.

“Congressman Cantor has an excellent relationship with Jews who are engaged in campaign finance activities whether as Republican Jewish Coalition leaders, AIPAC leaders or as Jewish federation stalwarts,” Daroff said.

That would help McCain, who is not a natural fund-raiser.

Cantor’s deeply held conservative convictions also would help a presidential candidate who has made conservatives nervous because of his maverick tendencies.

Democrats say that those same views – Cantor’s tough advocacy of right-to-life positions, of Bush administration secrecy policies and of pro-gun laws – could ultimately harm him among Jews when those views come to light.

“Eric Cantor is out of step with the values and views of the vast majority of the American Jewish community,” said Ira Forman, the director of the National Jewish Democratic Council. “Whether the issue is separation of church and state, women’s reproductive rights, stem cell research, health care or the environment, Eric Cantor votes wrong.”

Forman said the novelty of a Jewish Republican on the ticket would soon wear off.

“Hardly anyone outside the political elites in the Jewish community knows who Eric Cantor is,” he said. “The more people know about him the less they’ll like him.”

That’s true only if one expects a Republican to leave his convictions behind, said Brad Wine, a lawyer who is a fund-raiser for Cantor and heads the RJC’s Washington-area chapter. Wine said Cantor’s views on abortion stem from his Jewish observance.

“It’s true we’re not proportionately divided on the issue,” Wine said, referring to the Jewish tendency to favor pro-choice positions, “but it’s something we can disagree about based on Jewish learning.”

Halber said Cantor’s backing was critical to advancing Iran divestment legislation among his former Republican colleagues in the Virginian House. The state’s Republicans, still smarting from losing a fight over divestment from South Africa in the 1980s, believe that legislative mandates to divest state pensions amount to unwarranted political interference.

Daroff said Cantor has been an effective representative of Jewish concerns to the Republican caucus. Cantor, a member of the powerful Ways and Means Committee, helped resist efforts to limit tax exemptions for nonprofits, Daroff said, citing an issue of importance to the Jewish community.

Blunt affirmed that Cantor was the go-to man for the Republican leadership when it came to Jewish issues.

“The fact that Eric’s the only Jewish Republican member of the House creates an entry for the community,” he said.