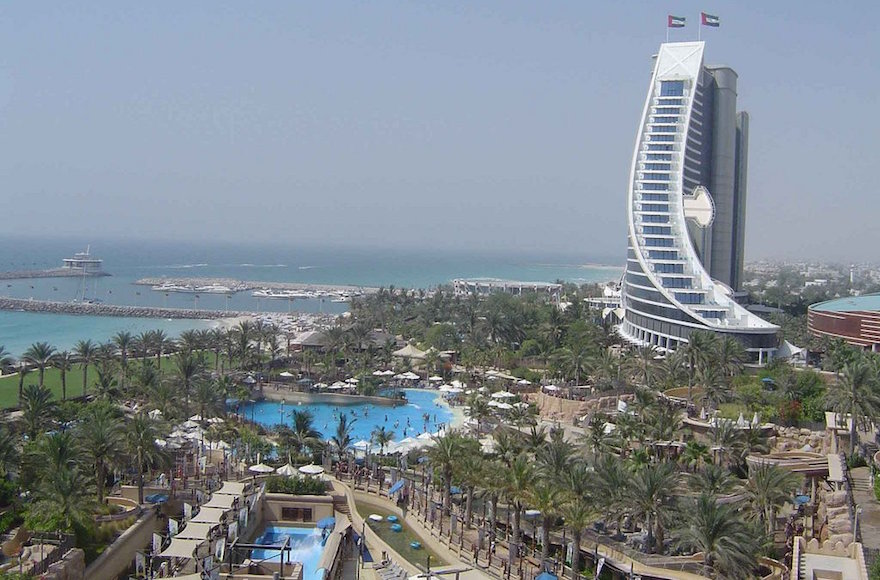 The United Arab Emirates blocked Israeli tennis player Shahar Pe’er from competing in a tournament in Dubai, but decided to permit her fellow countryman Andy Ram to play in the men’s draw this week. (Brian Hendler)

WASHINGTON (JTA) — Sometimes, Middle East diplomacy isn’t unlike tennis: You can work the ref and slam down your racket and curse yourself blue — or you can reach across the net and shake hands.

A U.S. Jewish organizational leader and a Jewish congressman from New York got results when they passed on the John McEnroe approach in favor of reaching out to officials in the United Arab Emirates after the Persian Gulf nation banned an Israeli tennis player from its tournament.

Jack Rosen, the chairman of the American Jewish Congress, and U.S. Rep. Anthony Weiner (D-N.Y.) each described for JTA their separate roles in getting the UAE to grant a visa permitting Andy Ram, the 12th-ranked doubles player, to play in the Barclay Dubai Tennis Championships Feb. 25 to March 9 days after Shahar Pe’er, the 45th-ranked women’s singles player in the world, was denied entry into the same tournament.

“If you engage in a dialogue with the right leadership, you can have a positive result,” said Rosen, who travels frequently to Muslim countries to promote closer ties to U.S. Jews and to Israel.

Insiders say the White House had a role in pressing the UAE to relent and admit Ram. But Weiner and Rosen also were active.

Weiner, an aspirant to New York’s City Hall whose public reputation is that of a bulldog, says he wasn’t out for an argument. He wanted al-Otaiba, whom Weiner says he likes, to explain what so clearly was, to the congressman’s understanding, “a mistake.”

“We went back and forth about Dubai having commendably created a moderate image for itself,” Weiner said Feb. 19. “Eventually the ambassador called me yesterday morning (Feb. 17), and said ‘we’re going to admit Ram.’

“I told him it wasn’t perfect. But at the end of the day, I said Dubai did the right thing.”

In a statement, Weiner said, “Even in times of conflict, sports should be a vehicle for celebrating our common ideals and not another device to divide us. Hopefully this is the last time that this lesson has to be taught. I commend the Ambassador for his understanding and desire to do the right thing. Now, let’s watch the players play.”

It’s not the first time Weiner, a strident backer of a number of sanctions bills targeting Israel’s enemies, has quietly extended a friendly hand to Arabs. In 2004, not long after he had followed the lead of his fellow New York Democratic Rep. Eliot Engel in ramming the Syria Accountability Act through Congress, Weiner had a quiet meeting with Syria’s ambassador to Washington at a backyard barbecue in Brooklyn organized by a Syrian Jewish constituent.

“At the end of the day, parlor meetings on Ocean Parkway are not as important as policy changes in Damascus,” Weiner told JTA at the time. “But if one paves the road to the other, then it’s worth exploring.”

Weiner has been friendly with al-Otaiba for just a few weeks, since he met him at a dinner party in New York.

“I was introduced to him through my girlfriend,” Weiner said, referring to Huma Abedin, the U.S.-born, Saudi-raised aide to U.S. Secretary of State Hillary Rodham Clinton.

Separately, Rosen called his old friend, Sheik Mohammed bin Rashid Al Maktoum, the prime minister of the UAE and the emir of Dubai, according to sources apprised of the conversations. Just months ago, Rosen had attended the wedding of one the sheik’s eight sons, the sources said.

Rosen, a wireless and real estate magnate, would not discuss those details, saying only that he had reached out to “someone from the diplomatic corps” in the UAE.

“I expressed my concern and suggested to them they ought to change their mind, and I thought that this was an opportunity for them to take a leadership role and change the public discourse,” Rosen said. “The leadership there is a new generation of Arabs who hopefully will view the world and politics differently.

“I’ve known the leadership for quite a few years; they are progressive. It’s a hopeful sign that the Middle East can have a different future and that relations with Israel can alter over time. Iit won’t happen overnight, but these kind of small steps are in the right direction.”

Unusually, the UAE embassy posted the announcement of Ram’s entry on its Web site. Not so unusual, the release did not mention anywhere that Ram’s entry was exceptional because he is Israeli.

“The decision to issue the permit is in line with the UAE’s commitment to a policy of permitting any individual to take part in international sports, cultural and economic events or activities being held in the country, without any limitation being placed on participation by citizens of any member country of the United Nations,” the statement said. “This is a well-established policy and has no political implications. Nor does this decision indicate any form of normalization of relations with countries with whom the United Arab Emirates does not have diplomatic relations.”

The media in tennis-obsessed Europe have depicted the controversy as stemming from the fallout of Israel’s recent Gaza Strip war. Weiner said it was not so fraught: Israelis on their way to the UAE usually give the authorities a heads-up through whatever organization they will be representing. In Pe’er’s case, Weiner said, the WTA, the governing body of women’s tennis, was unaware of the custom until it was too late.

“In some of these things there’s more than meets the eye — in this case less than meets the eye,” the New York lawmaker said. “This was a low-level bureaucratic decision that took on international significance and it became hard for them to extricate themselves from it.”

Pe’er and Ram each released statements saying that they were satisfied with the outcome.

“This is a great victory for the principle that all athletes should be treated equally and without discrimination, regardless of gender, religion, race or nationality,” Pe’er said. “It is also a victory for sport as a whole and the power of sport to bring people together.”

There may yet be consequences — the WTA is still considering the removal of the Dubai tournament from its calendar next year. And while most of the Jewish groups and pro-Israel lawmakers who condemned the Pe’er ban released statements welcoming Ram’s participation, it was clear that they would be keeping a closer eye on the UAE for the time being.

“While we are pleased that Andy Ram was ultimately allowed to enter the UAE, your government’s decision to deny Ms. Pe’er entry undermines your nation’s standing and could harm U.S.-UAE relations,” said a letter sent Feb. 19 from Engel and Rep. Shelley Berkley (D-Nev.) to the UAE president, Sheik Khalifa bin Zayed Al Nahyan. “As Congress considers the educational and energy partnerships between our two countries, we hope you will not repeat this unfortunate decision, and in the future will allow Israeli athletes — and those of other peaceful nations — entry into your country without bias.”

The last time the UAE was caught in the middle of a pro-Israel push on Capitol Hill was in 2006, when its nominal adherence to the Arab boycott of Israel became an issue in the controversy over the decision to allow Dubai Ports World to manage six U.S. ports. Among those coming to the Gulf’s state defense at the time were Israel’s government and business community. The UAE barely observed the boycott, they said, and if anything, its businesses — including Dubai Ports World — were increasing their trade with the Jewish state.