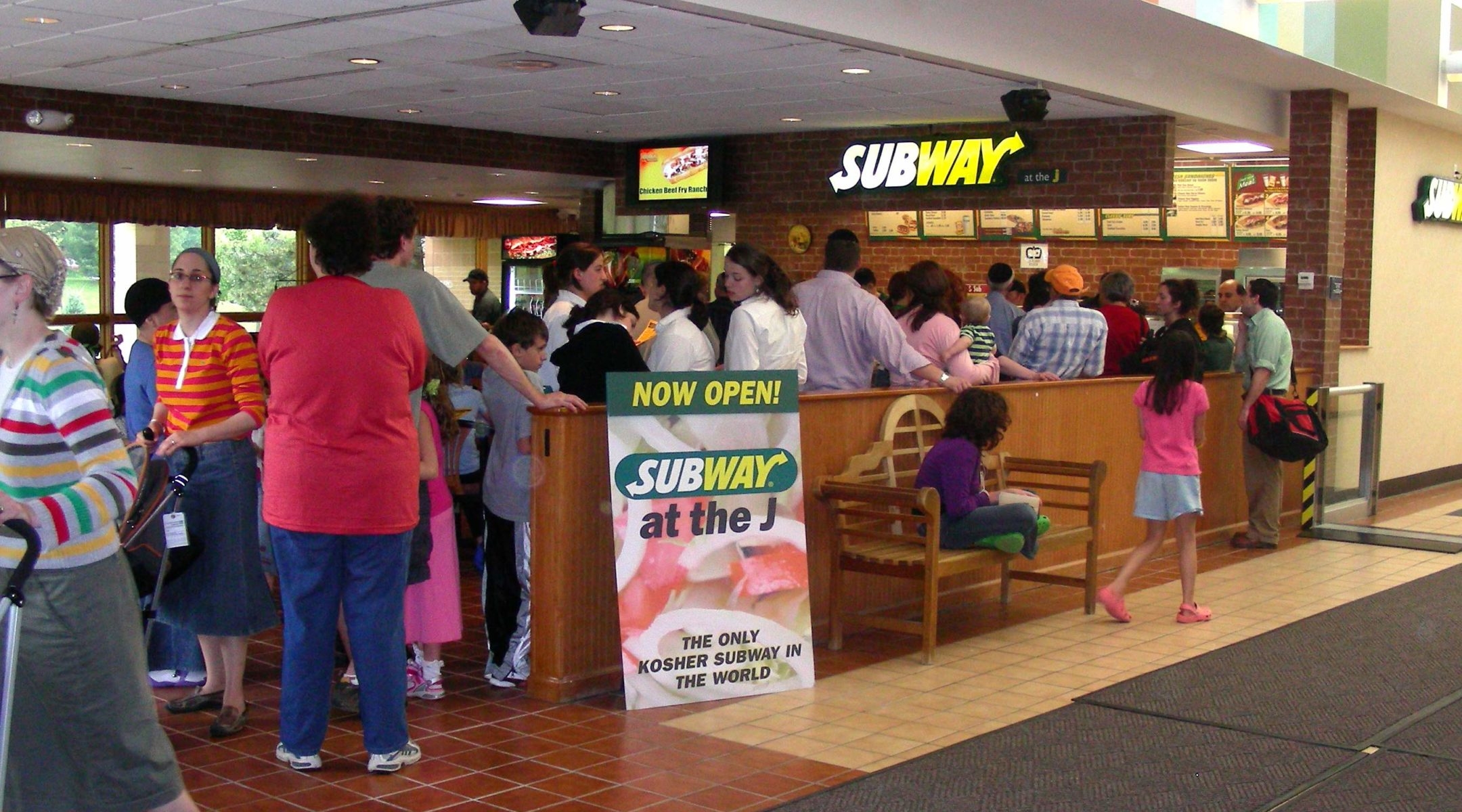 Customers lined up at the Subway inside the Jewish Community Center in Cleveland, Ohio, the only Kosher one in the world when it opened in 2006. (Courtesy Doctor's Associates)
Advertisement

The dark-horse winner is Subway, the made-to-order sandwich giant poised to open its ninth kosher franchise Aug. 18 inside the Michael-Ann Russell Jewish Community Center in North Miami Beach, Fla. New Subways opening in Indianapolis and Skokie, Ill., will make it 11 by the end of the year. Five more are planned for next year.

Subway is not the only fast-food chain with kosher branches. Dunkin’ Donuts, the world’s largest coffee and baked goods chain, has 33 kosher franchises, mostly in New York, according to company spokesman Andrew Mastrangelo. They serve dairy breakfast sandwiches, but not full meals.

Subway, the second largest fast-food franchise in the world, didn’t set out to be No. 1 in the kosher market. Staffers at company headquarters in Milford, Conn., seemed bemused by the news.

Sure, 11 kosher stores pales in comparison to the 22,000 non-kosher Subways in the United States, or to the hundreds of halal Subways in England and the Arab world. But it’s more than anyone else is offering.

And it’s a creative solution for Jewish community centers that want to offer kosher food but don’t want to take the financial risk themselves. Some would rather offer no food than violate kosher law.

“There are very few JCCs that run successful food establishments,” says Eric Koehler, director of the JCC of Northern Virginia, which has never provided food services in its building. “In this economy, it doesn’t make sense to have something that loses $20,000 to $30,000 a year.”

That’s why the Mandel JCC in Cleveland rented space to the country’s first kosher Subway in May 2006. The center had offered only kosher dining options since it opened in 1986, but none lasted very long. When Michael Hyman arrived in 2004 as the center’s new director, he closed the building’s last struggling cafe without knowing whether he could replace it.

In stepped Ghazi Faddoul, a Lebanese Christian who had opened 100 Subways in Cleveland and was willing to give kosher a try with the clout of a global chain behind him.

Ham and bacon were removed from the menu, the “cheese” is made of soy, and the Seafood Sensation sandwich is filled with imitation crab. Two microwaves and toaster ovens ensure that fish and meat are kept separate, a consideration for more observant Jews. There is a full-time mashgiach, or kosher supervisor, and the restaurant is closed on Shabbat.

“It’s been wildly successful,” Hyman says.In June, the JCC of Greater Washington in Rockville, Md., picked up on Cleveland’s experience, opening a kosher Subway in a space formerly filled by a kosher Dunkin’ Donuts. Executive director Michael Feinstein says the center has been getting much more foot traffic since it opened, particularly from Orthodox Jews.

“There aren’t that many kosher restaurants in the D.C. area, so it’s nice for the community to have this option,” Feinstein says. “And it’s great for us because it gets people into our building who might not otherwise be there.”

The Miami Beach JCC also looked to Cleveland’s example. The center’s director, Gary Bomzer, notes that the building already has an in-house kosher caterer, but no sit-down restaurant.

“Bringing in a national chain gives us real credibility,” he explains. “A brand name like Subway provides more than a cup of coffee.”

The remaining kosher Subways are freestanding stores: two in New York City, in Brooklyn and Queens, as well as one in Cedarhurst in the city’s Long Island suburbs; and one each in Los Angeles, Baltimore and Kansas City.

The U.S. stores are the only kosher Subways. Israel opened the world’s first kosher Subway in 1992 but the operation, which reached 23 stores at its peak, shut down in 2004 after the original manager died.

Subway spokesman Les Winograd says the company used its experience with halal, the Muslim standard, to learn how to deal with kashrut challenges such as sourcing specific meat and following strict dietary laws. The first halal Subway opened in Bahrain in 1984, followed by branches in Saudi Arabia, Kuwait, the United Arab Emirates, Tanzania, Zambia and other countries with large Muslim communities. England alone has nearly 60 halal branches.

Kosher Subways are more difficult to keep open, Winograd says. Some open and shut, like one that lasted for about a year in Livingston, N.J., and a Wall Street branch that closed last winter when the economy collapsed.

While Winograd receives lots of inquiries from potential franchise owners in other countries who are interested in the kosher option, none have panned out.

“The population has not always been there to support the business,” he says.

Maurice Lichy, owner of the new Miami JCC Subway, says he’s trying to keep his prices “competitive” and hopes to charge no more than $1.50 extra per sandwich.

Will he offer a kosher $5 Footlong?

“No,” he says, “but I’ll try to manage a $6 Footlong. Probably tuna or turkey; not the corned beef.”