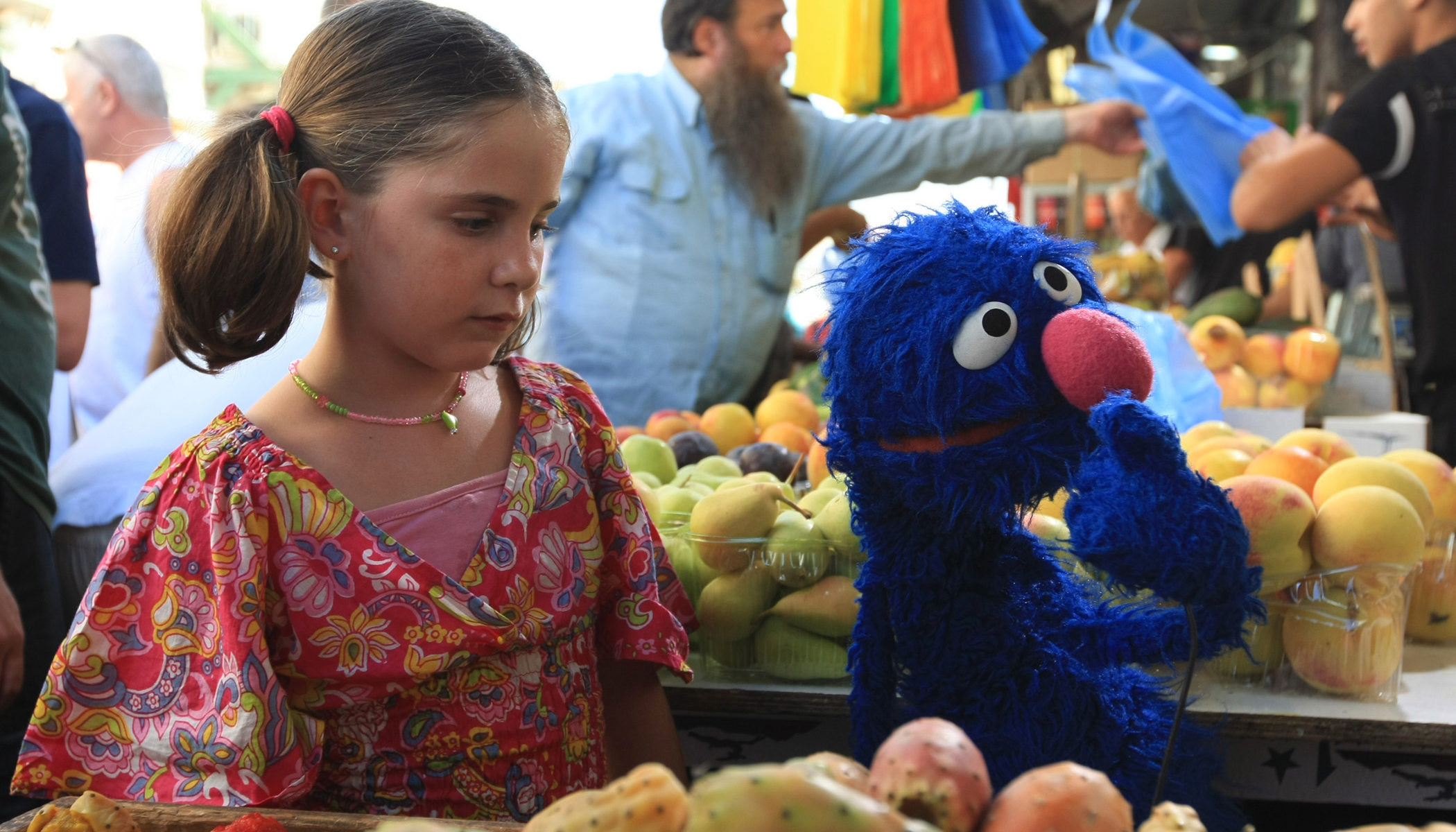 Grover mulls his selections at the open-air market Machane Yehuda with the help of an Israeli girl during the filming of "Shalom Sesame" in Jerusalem on Aug. 28, 2009. (Koby Gideon / Flash 90 / JTA)
Advertisement 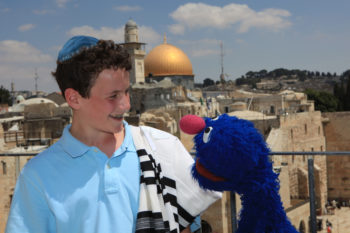 Michael Rosenberg of New York City chats with Grover, who attended his bar
mitzvah in Jerusalem as part of the “Shalom Sesame” filming, on Aug. 28, 2009. (Koby Gideon / Flash 90)

HERZLIYA, Israel (JTA) — Grover has been getting to know Israel.

The furry, blue “Sesame Street” character has visited the Dead Sea, Caesarea, the Western Wall and even Jerusalem’s shouk to sample the produce.

Along with Disney Channel star Annelise van der Pol, Grover has been exploring the Jewish state as part of a Sesame Workshop production called “Shalom Sesame.”

The 12-part series is geared toward North American Jewish children and their families to forge a sense of Jewish identity by providing a taste of Israel, Jewish traditions and culture. It will include celebrity appearances by Jake Gyllenhaal, Debra Messing and possibly Ben Stiller, among others, and is scheduled for a Chanukah 2010 release.

A 1986 production of the same name sold 1 million copies and is considered the top-selling Jewish educational title.

More than 20 years later, it was time to update and overhaul the content.

“The needs of the Jewish community have changed,” said Danny Labin, the project’s executive director, speaking at the studio outside of Tel Aviv where segments are being filmed.

Labin noted shifting demographic realities such as intermarriage and Israel’s large immigrant populations from the former Soviet Union and Ethiopia. Two of the new human characters reflect this diversity in Israel: One is an Ethiopian Israeli woman, the other a Russian immigrant.

Scripts and concepts have been reviewed with the help of a team of senior experts in Jewish education representing the religious streams and a range of backgrounds, from Chabad to Reform.

“We are trying to make something that is accessible to those not ensconced in a formal Jewish framework to help parents feel more comfortable and get them interested in a search for identity themselves,” Labin said.

The project also intends to supplement the TV show with an interactive Web site and other media platforms, including plans to use joint online projects to help connect Jewish Israeli and American children with the show as a vehicle.

In the first episode of “Shalom Sesame,” the character played by van der Pol —  a Jewish-American actress who was named after Anne Frank — is seen on a plane flying to Israel for her first visit.

After hearing Grover, cast as a flight attendant, shout out “Kosher meal! Aisle 10!,” they strike up a friendship and decide to travel together throughout the country. Throughout the series the pair remain in Israel — a device that lets children see various landscapes, meet Israeli children and even learn a little Hebrew.

There are episodes on the Jewish holidays, mitzvah themes such as loving animals and treating others kindly, animation segments and interviews. The Chanukah episode will feature a visit with a family whose menorah has remained in the family for generations. The Rosh Hashanah episode opens with a discussion about new beginnings as the audience sees an Israeli girl start her first day at school and her brother learn how to blow a shofar.

In an exclusive interview with JTA, Grover discussed why he was excited about the project.

“My home is ‘Sesame Street,’ but I love meeting people from all over the world, and one of those places is Israel, where I have been able to make new friends and learn,” he said in his trademark high-pitched tone. “I have learned a few words in Hebrew, like ‘toda’ [thank you] and ‘boker tov’ [good morning], and that pretty much gets me by.”

Eric Jacobson, the puppeteer who assumed the voice and actions of Grover about 10 years ago after the legendary Frank Oz retired, said Grover seems to connect with audiences young and old both in Israel and around the world.

“Let’s start with that Grover is blue,” Jacobson said during a break from filming. “No one I know is blue, and therefore he can be anybody.”

Three other puppets join Grover in the cast, including a floppy-haired Arab Israeli named Mahboub.

Shahar Sorek plays another human character, an archeologist who is religiously observant and wears a kipah. Often he is the one to explain some of the Jewish rituals and Bible stories.

“I think it’s important to protect and present our Jewish heritage, and this is a tool for helping to do that,” Sorek said.

“Shalom Sesame” is the first series intended to reach out specifically to an American Diaspora audience, but similar programs are planned for children of Arab Americans and of Indian Americans based on “Sesame Street”-style programs in Egypt and India.

During a scene shot last week from the final episodes of “Shalom Sesame,” at a farewell party for Grover and van der Pol, a wistful van der Pol looks around at her new friends and says, “I can’t believe my Israel adventure is over. It’s been the most amazing experience of my life — the friends, the fun.”

“The falafel!” pipes in Grover, prompting a round of laughs.

Shoshana, who plays an Israeli family friend of van der Pol’s character, turns to her and says, “You will always have a home here. You are our mishpocha now, part of our family.”

The director calls out, “OK everyone, get a little mushy now.”