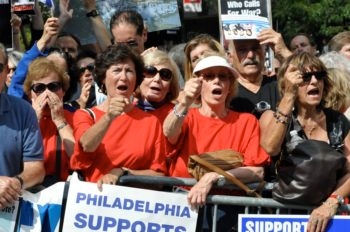 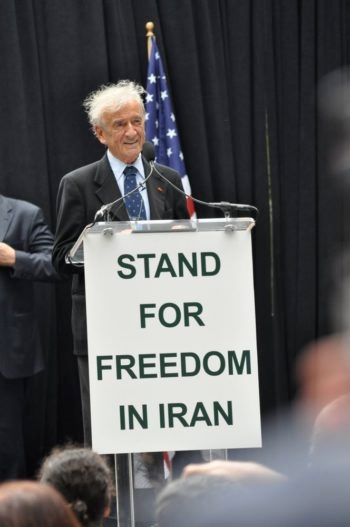 NEW YORK (JTA) — As Iranian President Mahmoud Ahmadinejad blasted Israel and the United States on Wednesday at the United Nations General Assembly, world powers sought to step up the pressure on the Islamic Republic.

“We expect a serious response from Iran and will decide, in the context of our dual track approach, as a result of the meeting, on our next steps,” said David Milliband, the British foreign secretary, after representatives of the United States, Britain, France, Russia, China and Germany met Wednesday on the sidelines of the U.N. General Assembly in New York. The countries are scheduled to meet with Iran on Oct. 1.

And Hillary Rodham Clinton, the U.S. secretary of state, emphasized the “dual track” policy of both isolating Iran and negotiations.

“No one should underestimate our intention to follow through on either or both of these tracks,” she said. “It depends on Iran’s response. And some of you have heard me say this numerous times — this process is now firmly up to Iran.”

There was even a signal that Russia, which has been most resistant to additional sanctions on Iran, may be ready to relent.

“Our task is to create such a system of incentives that would allow Iran to resolve its fissile nuclear program, but at the same time prevent it from obtaining nuclear weapons. That’s why we, as responsible members of international community and, indeed, two nuclear superpowers, should send great signals in that direction,” said Russian President Dmitry Medvedev in a photo opportunity with President Obama.

“Russia’s belief is very simple, and I stated it recently — sanctions rarely lead to productive results,” he added. “But in some cases sanctions are inevitable.”

Ahmadinejad spoke of “the elimination of all nuclear, chemical and biological weapons,” during his speech to the UN, but otherwise didn’t mention his country’s nuclear program. Instead, he criticized Israel’s “inhuman policies in Palestine” and said the Jewish state had committed “genocide” in a speech that led to walkouts by numerous other countries in the General Assembly.

The international community “is impatiently waiting for the punishment of the aggressors and the murderers of the defenseless people of Gaza,” said Ahmadinejad. He added, in an apparent reference to Jews, “It is no longer acceptable that a small minority would dominate the politics, economy and culture of major parts of the world by its complicated networks, and establish a new form of slavery, and harm the reputation of other nations, even European nations and the U.S., to attain its racist ambitions.”

The Iranian president also criticized the United States, also not by name, saying that it is “not acceptable that some who are several thousands of kilometers away from the Middle East would send their troops for military intervention and for spreading war, bloodshed, aggression, terror and intimidation in the whole region.”

Meanwhile, Argentinian President Cristina Fernandez de Kirchner, in her General Assembly speech, called for the extradition to her country of Iranian officials wanted in the 1994 bombing of the Buenos Aires Jewish center. Among the suspects wanted by Interpol is Ahmed Vahidi, who earlier this month was confirmed as Iran’s defense minister.The 1994 bombing, which killed 85 people, was allegedly carried out by Hezbollah agents with Iranian sponsorship and organization, but Argentina has not been able to bring anyone to justice for perpetrating the attack.

President Obama spoke at the start of Wednesday, saying that Iran and North Korea must be “held accoutnable” for their pursuit of nuclear weapons.

The reference to preconditions appeared to target Palestinian negotiators who insist on a total settlement freeze before renewing talks. Obama’s explicit commitment to comprehensive talks rebuts Israeli efforts to confine talks for now to borders.

Speaking immediately after Obama, Libyan leader Muammar Gadhafi insinuated that Israel was behind the assassination of President John F. Kennedy because he allegedly wanted to launch a probe into its clandestine nuclear program.

“Jack Ruby, an Israeli, killed Lee Harvey Oswald,” the Libyan leader was quoted by the translator as saying. “Why did this Israeli kill Harvey? Ruby later died mysteriously. The whole world should know that Kennedy wanted to investigate the actions of the Israeli nuclear reactor in Dimona.”

Ruby, a local nightclub owner who was Jewish, shot Oswald, the only official suspect in the Kennedy slaying, just days after Oswald’s arrest. Despite persistent conspiracy theories, numerous investigative committees have pointed at Oswald as plotting and carrying out the murder by himself.

The firebrand leader added that the Arabs had historically been friends of the Jewish people and blasted Europe for mistreating the Jews.

“You are the ones that brought on them the Holocaust,” he said.”We gave them havens during the Spanish Inquistion. We are not enemies of the Jews. The Jews will one day need the Arabs, and then the Arabs will give them protection.”