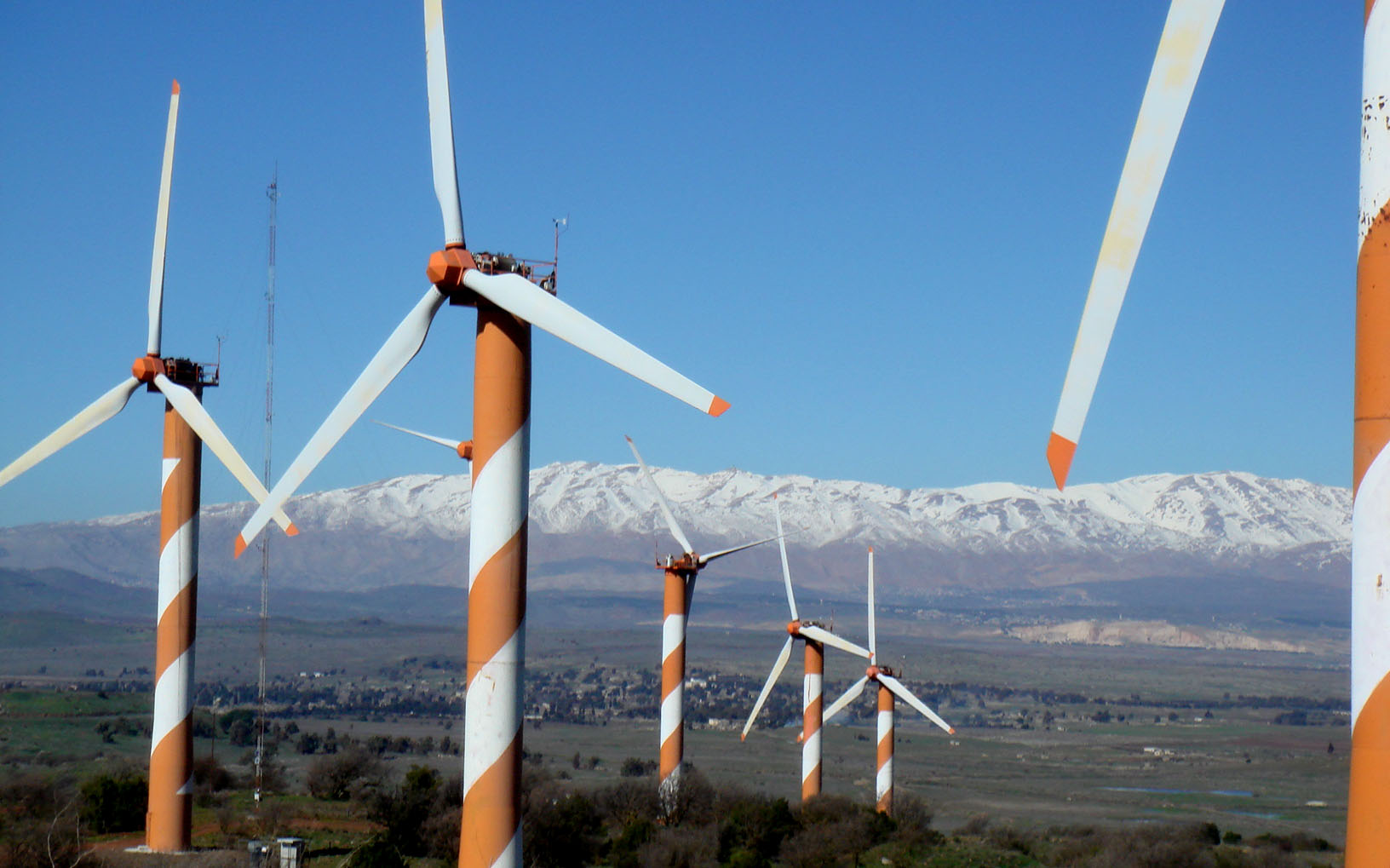 Wind turbines in Isreal, such as these seen near Kibbutz Ein Zivan in the Golan Heights, are being improved by technology created for military helicopter propellers. (Haim Azulay / Flash90 / JTA)
Advertisement

Israel, which long has been a global leader in military technology, is adapting its technologies to develop green advances.

“We definitely leverage a lot of know-how in a variety of disciplines — including materials, chemistry, thermal dynamics — accumulated from our experience with military and homeland security technology for developing renewable energy technologies,” said Meni Maor, vice president of  business development for Rotem, a  Dimona-based company that commercializes technologies first used in Israel’s defense industry.

The company is something of a case study on the subject. In the past three years, Rotem has begun to focus on renewable energy technology with projects on solar and hydrogen power, wind energy and bio-fuel.

BrightSource Energy, which is developing the world’s largest solar thermal plant in Southern California, is piloting its technology at Rotem.

“The whole world is highly motivated to invest in the clean-tech sector as people search for interesting technologies for more effective energy generation because of the threat of global warming and cost of oil prices,” said Maor, noting Israel’s special security-motivated reasons to reduce the global dependence on oil, much of which comes from Arab states.

As part of that goal, Israel recently signed on to be one of the first countries to pilot the driving of environmentally clean electric cars on a large scale as part of a project sponsored by the company Better Place, in partnership with automakers Renault and Nissan. The robotics for charging the batteries in the cars is based in part on aerospace technology.

Another example of the transfer of military technology to clean tech is work being done by Israel Aeronautics Industries, one of the country’s most prominent defense companies. Its researchers are tapping into their experience in aeronautics to develop wind energy and wind turbines.

One way is by using software used to calculate the optimization of the aerodymanic profile of an airplane wing to make a better turbine blade. The company hopes other research-and-development experience will lead to the creation of a higher-performance, lower-weight wind turbine that costs less.

“We are identifying the potential of IAI engineering to provide added value to the clean-tech sector in general and wind turbines in particular,” said an IAI official who spoke on condition of anonymity because of the security-related nature of the work. “We are trying to identify what assets we can bring and provide on the market end.”

IAI also is working to help create what is being called “clean, green aircraft” as part of a European initiative, joining forces with Airbus to develop an environmentally friendly system for airplanes taxiing at airports aimed at saving fuel and decreasing noise levels and air pollution. The technology would use a system that allows planes to taxi to and from the gate without using their jet engines.

In addition to technologies being transferred from the military world to the clean-tech sector, there is also manpower transfer. A growing number of retired army officers and scientists are playing leading roles in Israel’s clean-tech industry.

Samia spoke recently at a gathering of industry professionals sponsored by the investment firm Israel Cleantech Ventures as part of a panel of former IDF officials now working in clean tech.

“It’s a lot of fun to work in this field. I’m driven by the sense of curiosity it fosters,” he told an overflow crowd. “There is also a sense of national responsibility to what we are doing.”

Elad Frankel, CEO of Aqwise, an advanced wastewater treatment solutions company and veteran of a prestigious intelligence unit called 8200, spoke of how experience gained in the army is good preparation for the industry.

He said it was in the army that he learned to analyze complex problems and come up with solutions with limited resources.

“In the army we learn how to follow through on a mission,” Frankel said.

“And now we have the clean-tech revolution, which is doing good things not just when it comes to water and energy. It’s also giving Israel a name in a more positive industry.”