How Israel is implementing the settlement freeze 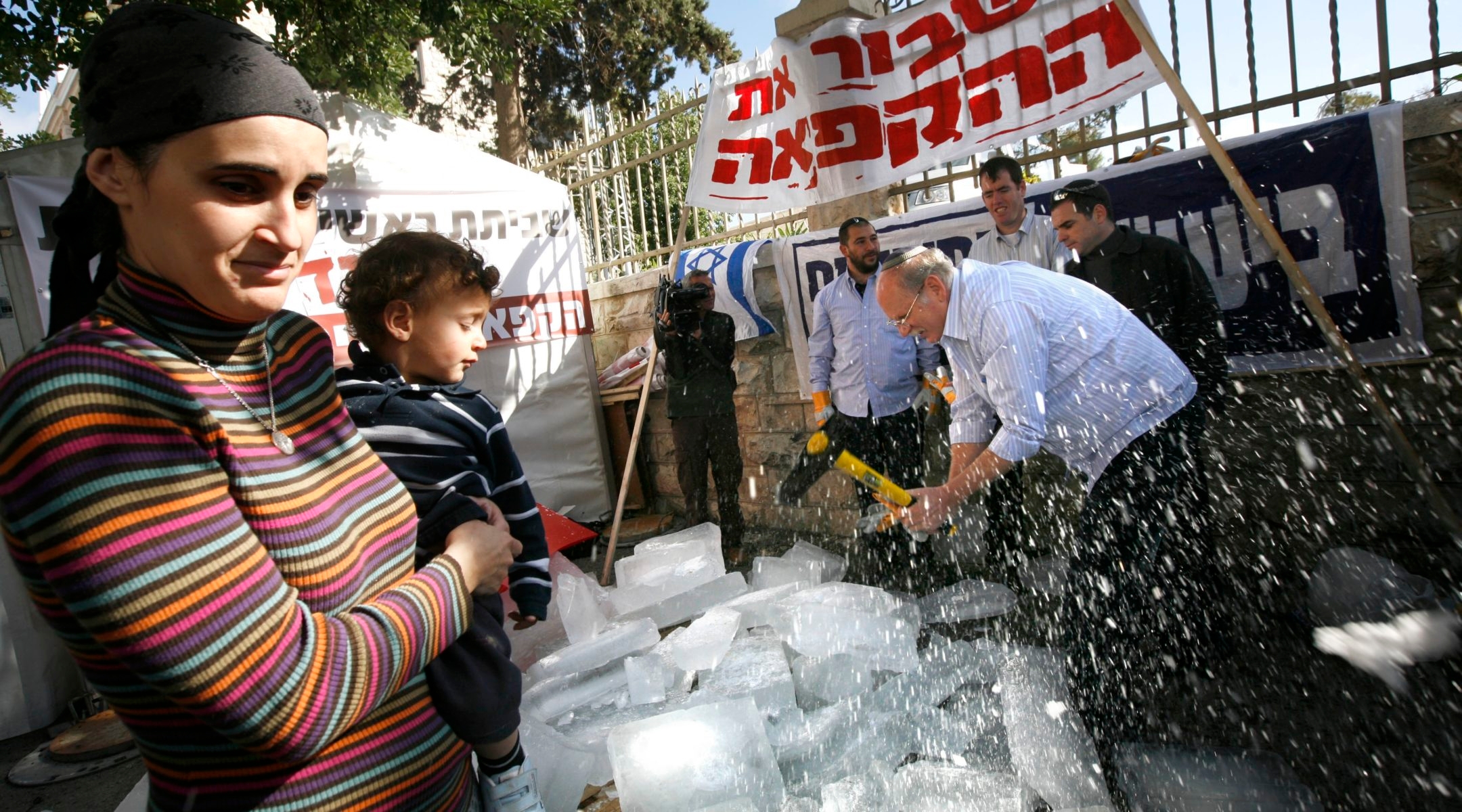 JERUSALEM (JTA) — While an Israeli magician sat in an ice cube in Tel Aviv for 64 hours in a bid to shatter a world record, settler leaders in Jerusalem prepared to smash an ice cube of a very different sort this week opposite the prime minister’s residence.

The frozen block in Jerusalem that was shattered Monday by the leaders of West Bank communities was meant to symbolize the 10-month construction freeze Prime Minister Benjamin Netanyahu is imposing on Jewish communities in the West Bank. Settler leaders are holding a weeklong demonstration outside the prime minister’s residence to protest the freeze, and the leader of the main settler umbrella group is encouraging people to keep building in violation of the freeze.

In the meantime, however, construction in many Jewish West Bank towns has ground to a halt.

Some 230 stop-work orders were issued on projects in approximately 150 Jewish West Bank towns visited by government inspectors. In addition, 36 pieces of building equipment used in illegal construction were impounded, according to a spokesman for the Defense Ministry’s Civil Administration, which is responsible for law enforcement in the West Bank.

“The Civil Administration is carrying out the government’s decision regarding the suspension of building in Israeli communities in Judea and Samaria,” the spokesman told JTA, using the Jewish term for the West Bank.

Netanyahu ordered the freeze in late November in a bid to draw the Palestinian Authority back to the negotiating table and satisfy the Obama administration’s demand for a halt to settlement building. While the Palestinians have rejected the temporary freeze as an inadequate measure, Israeli authorities have been laboring to enforce it just the same.

The question for many Israelis is how far, exactly, the government is willing to go on enforcement.

Two weeks ago, Israeli newspapers printed the contents of a leaked Israeli army memo showing detailed plans to demolish illegal buildings under construction in the West Bank, and Israeli Border Police and soldiers reportedly are poised to carry out the demolition orders.

The freeze is being enforced “meticulously” and in an “extreme way,” criticized Dani Dayan, head of the Council of Jewish Settlements of Judea and Samaria, the main settler umbrella group.

But an official at Peace Now, which advocates for a full halt to Israeli settlement construction and monitors Jewish growth in the West Bank, said it’s too early to determine whether or not Netanyahu’s freeze order is being enforced.

Hagit Ofran, director of Peace Now’s Settlement Watch project, said the proof will be in how the government deals with freeze violations – including those she and Peace Now volunteers say they have seen firsthand in recent visits to Jewish towns in the West Bank.

While she praised the freeze as the most dramatic ever by an Israeli government, and noted that it does not distinguish between far-flung settlement outposts and the large settlement blocs near the pre-1967 boundary between Israel and the West Bank, Ofran said Netanyahu’s freeze still doesn’t go far enough. It should have covered construction of any kind and been long term, she said, otherwise construction will resume with lightning speed as soon as the 10 months are up.

Netanyahu’s freeze was minimal and done to “satisfy the Americans,” she said. “On the ground, the Palestinians do not see any real change.”

But settlers are complaining that the freeze goes too far. Dayan said Israeli authorities are using “a lot of unnecessary force” to enforce the freeze, and that the halt in construction is causing great personal hardship for Jews living in the West Bank.

As an example, Dayan noted that recently married couples in his own community of Maale Shomron who are ready to build new homes on recently purchased property now must shell out rent for at least 10 more months before they can begin building. Prohibiting work on homes, he said, is a violation of settlers’ “civil rights.”

Aside from encouraging people to continue building despite the freeze, Dayan said, he’s encouraging communities to continue with planning and approval processes and land development, so construction can begin immediately when the freeze is lifted in September.