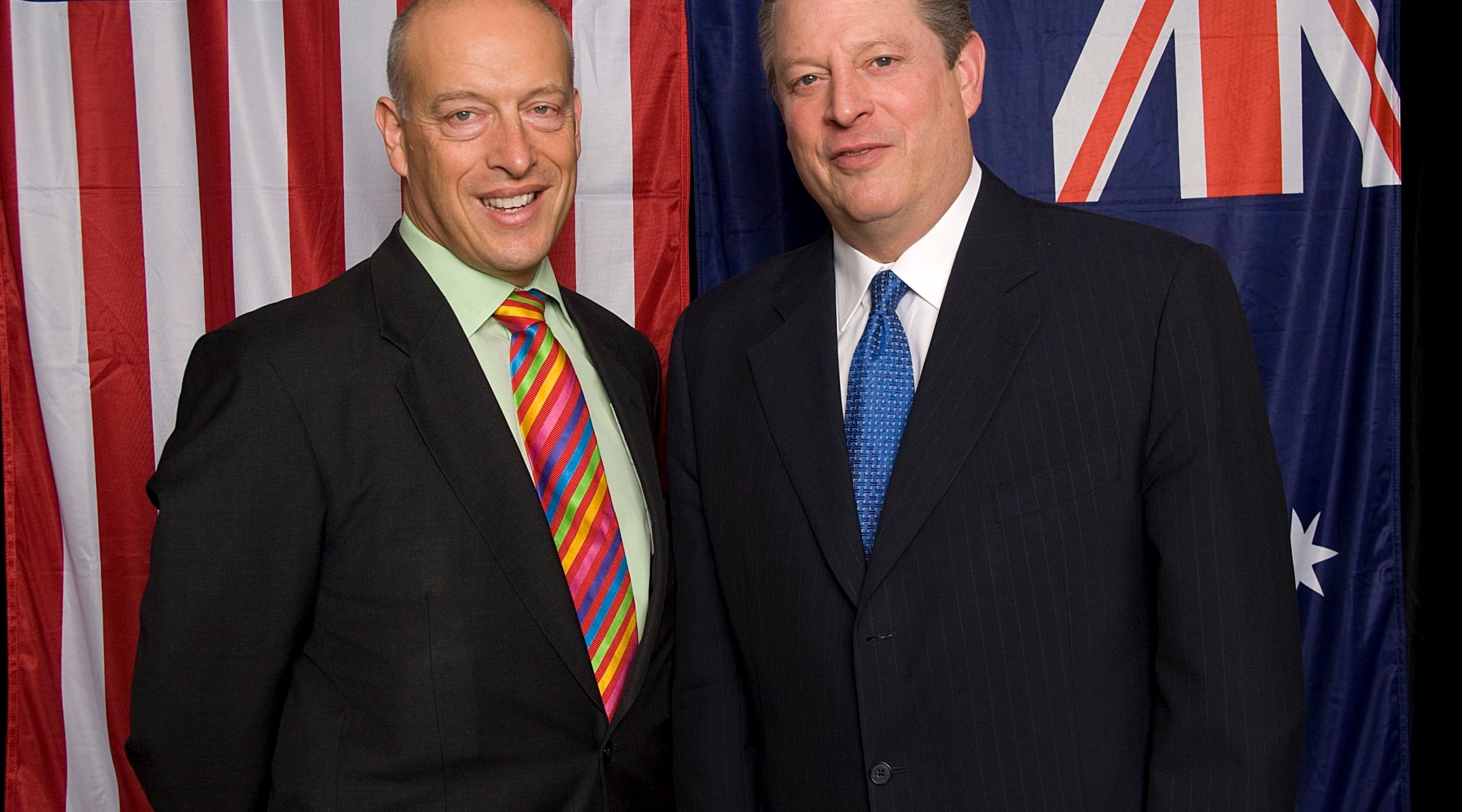 Max Markson, left, shown with Al Gore, claims that "Everything that's in 'Willy the Wizard' is in 'The Goblet of Fire.' " (Courtesy of Max Markson)
Advertisement

SYDNEY, Australia (JTA) — It could be the script for a best-selling novel or a blockbuster film.

Instead it’s the real story of the estate of a bankrupt Jewish author who died in London more than a decade ago and now is now at the center of a “billion-dollar” copyright case against J.K. Rowling, the multimillionaire author of “Harry Potter” fame.

Adrian Jacobs, an art collector, lawyer and accountant who made millions on the stock market before going bust, wrote a children’s book in 1987 titled “The Adventures of Willy the Wizard: No. 1 Livid Land.”

Lawyers for his estate on Feb. 17 added Rowling’s name to a lawsuit it filed in the High Court of England last June — some 12 years after Jacobs died penniless in Nightingale House, a home for elderly Jews in south London.

The suit claims that Rowling plagiarized ideas for her fourth book, the best-selling “Harry Potter and the Goblet of Fire” (2000), from “Willy the Wizard No. 1.”

Rowling, who is worth nearly $770 million, according to the Sunday Times of London’s 2009 rich list, vehemently denies the allegations, blasting them as “unfounded” and “absurd.”

In a statement, she said her legal team will apply immediately to have the case dismissed because it is without merit.

Max Markson, the colorful Australia-based publicist representing the Jacobs estate, says the estate took the case to the High Court because Rowling’s British publisher, Bloomsbury, has repeatedly rebuffed the allegations. Lawyers acting for Jacobs’ son, Jonathan, who lives in the United States, first approached Bloomsbury in 2004 alleging that Rowling had pilfered ideas from Jacobs.

“It has the same plot line. Everything that’s in ‘Willy the Wizard’ is in ‘The Goblet of Fire,’ ” Markson said.

The British-born Markson was a student at Carmel College, a Jewish boarding school near London, between 1966 and 1972 before moving to Australia and earning great wealth representing celebrities.

He has brought Down Under the likes of George H.W. Bush, Bill Clinton, Al Gore and Nelson Mandela, among many others.

Markson said his older brother, David, who also had written a book, was “very, very close” to Jacobs and had introduced him to his literary agent at the time, Christopher Little, who now acts for Rowling.

“In 2003 the connection was made that Christopher Little, Adrian’s agent, was now J.K. Rowling’s agent and that’s when we started looking into it more,” Max Markson said.

Independent publishers Backman and Turner printed 5,000 copies of the 36-page “Willy the Wizard” book in October 1987, according to the book’s Web site.

Markson says the case is “probably the biggest ever as far as copyright cases go.”

He said that Jonathan Rayner James, who in 2007 represented two authors claiming that Dan Brown had infringed on their copyright in his blockbuster book “The Da Vinci Code,” has been hired as the lead counsel representing the Jacobs estate.

Markson hopes to travel to London in May to witness the court proceedings.

He says the case has “enormous substance to it.”

“If they win the case against Bloomsbury, it rolls around the world,” he said. “Anything with Harry Potter — films, games — it becomes a domino effect.

“It’s a billion-dollar case, the books are an enormous franchise, it’s in the High Court of England. It doesn’t get much bigger than that.”