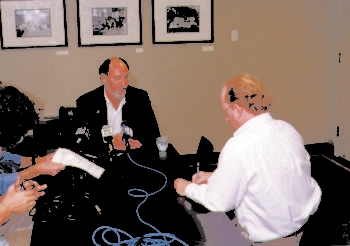 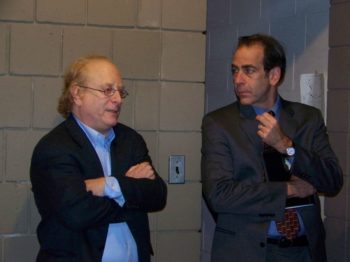 NEW YORK (JTA) — What do you do when your Washington correspondent has an important scoop, but a representative of the Israeli army is urging you not to publish, saying it will be harmful to the Israeli military?

That’s the scenario I was facing a few months back.

Before making a decision, I wanted some advice. But who to call?

A fellow journalist might be too eager to publish, an establishment organizational leader too reluctant. No matter who I asked, the person would probably try to sneak his or her own political agenda into the situation.

I needed someone with a sympathetic and informed understanding of Israeli security concerns, a deep appreciation and respect for journalists doing their jobs, and an ability to set aside his or her personal politics.

So I phoned David Twersky.

It doesn’t matter what he said. The point is that he was the only person I even thought to call.

Twersky, 60, who died of cancer July 16 with loved ones by his side, was a longtime Labor Zionist who made aliyah in 1974, becoming a stalwart in the kibbutz movement and advising Israeli notables, including the late dovish Foreign Minister Abba Eban.

Then in 1990, after moving back to the United States, he became a headline-generating Washington correspondent for the Forward under the tutelage of neoconservative editor Seth Lipsky, alienating some of his liberal friends with national scoops like the one that ended up bringing down Clinton nominee Lani Guinier. Twersky would rejoin Lipsky years later at The New York Sun as a foreign affairs columnist — and come out in favor of George W. Bush in 2004.

But this wasn’t the story of a leftist exchanging one set of ideological talking points for another: Twersky supported the Oslo process and backed Barack Obama in 2008. To the end, if anything, he remained a Laborite, albeit a fiercely anti-communist and pragmatic one who wouldn’t let ideology get in the way of independent reporting or thinking.

Along the way he also worked at several Jewish organizations, including his final job, a three-year stint at the American Jewish Congress, where he reportedly helped conduct negotiations with the governments of Pakistan, Venezuela and Russia.

One of Twersky’s best buddies from his Labor Zionist youth group days and colleagues at the Forward, journalist J.J. Goldberg, took a different path. He couldn’t stomach Lipsky’s politics, so he quit the newspaper — only to return nearly a decade later in 2000 to succeed Lipsky after he was deposed.

Goldberg and Lipsky are adversaries in a decades-long, very Jewish journalistic-ideological battle, with roots in Ben-Gurion vs. Jabotinsky, that has been running strong through Reagan, Oslo, Clinton, Bush II and Obama. But in life (and death), Twersky somehow bridged the gap: Lipsky memorialized Twersky in an editorial on the Sun’s website, calling him “one of the most remarkable journalists of his generation”; Goldberg was with Twersky in his last hours and delivered a eulogy at his funeral.

More often than not, Twersky succeeded in navigating and bringing together dedicated Jews and Zionists of various stripes. To underscore the point, Goldberg pointed to Twersky’s election “more or less by acclamation” as chairman of the North American Jewish Students Network, a group that brought together religious, secular, leftist, rightist and almost any other label you could think of.

Goldberg also noted Twersky’s impressive run as editor of what was then the MetroWest Jewish News, the organ of the local federation in Whippany, N.J., when he took over the weekly in 1993. In perhaps his most impressive career accomplishment, he managed to help transform the publication into a chain of newspapers covering much of the state known as the New Jersey Jewish News and turn the job into a seat of influence, both in New Jersey politics and the wider Jewish world.

Despite the successes, Twersky ultimately managed to earn himself a pink slip, with a dictatorial managerial style that left many of his employees cowering in fear.

“Truly, David was one of the most brilliant people you could ever meet. … But his people skills were, to put it mildly, lacking,” wrote Alia Ramer, a blogger for the New Jersey Jewish News in an online reflection this week about Twersky. “His standard was perfection, nothing short, and only his definition of it. He was vocally angry about every mistake, every typo that made it into the paper.”

Ramer recounted a time when the staff needed to identify an Israeli politician in a photograph — but no one was willing to ask Twersky.

“We didn’t know,” she recalled, “if he would berate us for not knowing who the missing pol was or give us a jovial (and lengthy!) namedropping story of his 20-year relationship with the Israeli and how it was David who had been the first to suggest to him that he run for Knesset (stories, by the way, that usually turned out to be true).”

Still, Ramer had to concede, “David may have been difficult — okay, he was quite the angry little redhead — but he pushed me to be a better writer and editor.”

One of my favorite things about Twersky is that he never (at least with me) tried to sugarcoat his issues as a manager or how they got him into hot water. Of course, I never worked for him, so it’s easy to pass over this rough spot, to think of him more as a rascally redhead than an angry one, to focus on all the good that he did and the love that so many people had for him.

What’s not easy is coming to grips with the fact that there isn’t anyone — with the same mix of insight, independence, dedication to journalism and love of Israel and the Jewish people — for me to call next time I need some advice.