Week for mockeries at the United Nations 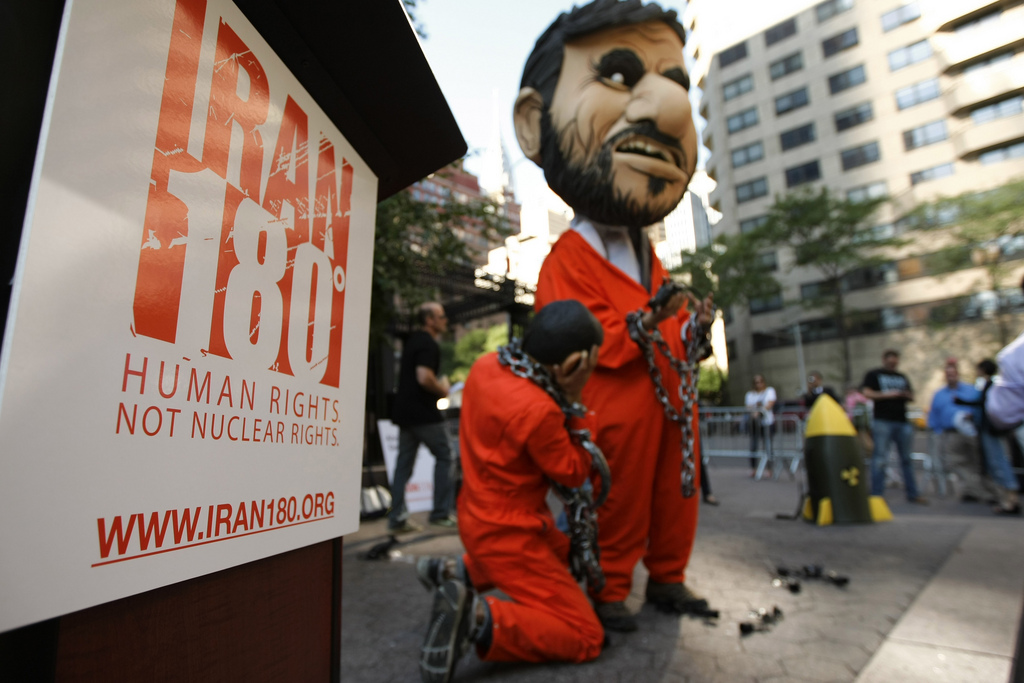 NEW YORK (JTA) — During last week’s gathering of world leaders for the annual opening of the U.N. General Assembly, some of the proceedings inside were nearly as farcical as the proceedings outside.

In one Jewish-organized protest on the street near the United Nations, activists wearing rainbow-colored wigs, mini-skirts and pom-poms danced around a man wearing a massive effigy of Iranian President Mahmoud Ahmadinejad’s head and clad in a nuclear suit and chains. Behind him stood an activist in a Hawaiian shirt wearing an Obama mask on his head, a rubber octopus on his hand and carrying a sign that read, “No Nukes for Iran.”

It was all part of a mock trial of the Iranian leader organized by a group called Iran180.

Inside the U.N. plenum, Ahmadinejad by many accounts was making a mockery of the attacks of Sept. 11, 2001.

The United States arranged the 9/11 attacks “to save the Zionist regime,” Ahmadinejad declared in his Sept. 23 address. Suggesting that U.S. officials at the highest levels were complicit in the attacks, he called on the United Nations to establish “an independent fact-finding group” to investigate.

The U.S. delegation walked out of Ahmadinejad’s speech, as did all 27 European Union delegations, Canada, New Zealand, Australia and Costa Rica.

As is his custom, the Iranian president also used his annual speech at the General Assembly to lash out against Israel.

“This regime,” he said of Israel, “which enjoys the absolute support of some Western countries, regularly threatens the countries in the region and continues publicly announced assassinations of Palestinian figures and others, while Palestinian defenders are labeled as terrorists and anti-Semites. All values, even the freedom of expression in Europe and the United States, are being sacrificed at the altar of Zionism.”

It wasn’t the only attack Israel faced last week at the United Nations.

A day earlier, the Geneva-based U.N. Human Rights Council issued its report on the May 31 flotilla incident in which Israeli soldiers killed nine Turkish activists in a confrontation aboard a Gaza-bound flotilla.

The report called the actions by Israeli naval commandos “disproportionate and brutal,” saying they “demonstrated levels of totally unnecessary and incredible violence” and calling for “prosecution against Israel for willful killing and torture.”

Israeli Prime Minister Benjamin Netanyahu called the report “biased and distorted.” Turkish Foreign Minister Ahmet Davutoglu called it “extremely fair and based on solid evidence. We appreciate that. It meets our expectations.”

A separate inquiry by the United Nations commissioned by Secretary-General Ban Ki-moon is ongoing.

At U.N. headquarters in New York, Israeli representatives did not respond to Ahmadinejad’s tirade because the speech took place on the Sukkot holiday and Israel’s U.N. delegation was absent.

President Obama made the case for Israel in his own speech to the U.N. General Assembly, which preceded Ahmadinejad’s.

“After 60 years in the community of nations, Israel’s existence must not be a subject for debate,” Obama said. “Israel is a sovereign state and the historic homeland of the Jewish people. It should be clear to all that efforts to chip away at Israel’s legitimacy will only be met by the unshakeable opposition of the United States.”

The U.S. president also called on the world community to back Israeli-Palestinian peace with deeds and not just words.

“Those who long to see an independent Palestine rise must stop trying to tear Israel down,” Obama said.

“Many in this hall count themselves as friends of the Palestinians, but these pledges must now be supported by deeds,” he said.

“Those who have signed on to the Arab peace initiative should seize this opportunity to make it real by taking tangible steps toward the normalization that it promises Israel,” he said, referring to the 2003 Saudi-sponsored plan that offered Israel comprehensive peace in return for its withdrawal to pre-1967 borders.

Following Ahmadinejad’s remarks several hours later, the U.S. mission to the United Nations issued a statement saying that “Rather than representing the aspirations and good will of the Iranian people, Mr. Ahmadinejad has yet again chosen to spout vile conspiracy theories and anti-Semitic slurs that are as abhorrent and delusional as they are predictable.”