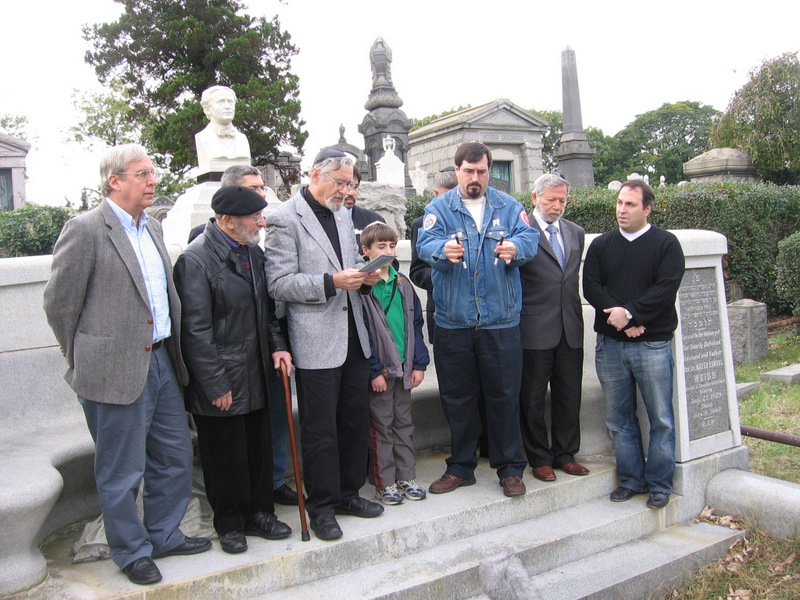 It’s not a mikveh: Houdini being lowered upside down into the Water Torture Cell, c. 1913. (Library of Congress, Rare Book and Special Collections)

LOS ANGELES (JTA) — On Halloween, the anniversary of his death, Harry Houdini will be back on stage.

The Jewish Museum in New York is opening a new exhibition, “Houdini: Art and Magic,” on Oct. 29, and curator Brooke Kamin Rapaport says the entrance gallery will feature a replica stage projecting a life-size image of the great Jewish magician performing his water torture act.

It’s a new way to keep alive the memory of Houdini, joining an annual seance that seeks to contact the daring escape artist and a graveside ceremony for a man who was called “The World’s Handcuff King and Prison Breaker” and the “Justly World-Famous Self-Liberator.”

Born Ehrich Weiss in Budapest, Hungary, in 1874, Houdini was the son of a rabbi who immigrated with his family to Wisconsin in 1878.

“Coming to America, Houdini’s family faced a lot of the same issues that other Jewish immigrants faced, including anti-Semitism,” said Rapaport.

“I never was ashamed to acknowledge that I was a Jew, and never will be,” Houdini is quoted as writing to a friend in the show’s sepia-toned and well-documented catalog.

According to the exhibition wall text written by Rapaport, his escapes “had particular resonance for those who sought liberation from political, ethnic, or religious persecution.”

Generally considered among the most famous magicians ever, Houdini died on Oct. 31, 1926, probably as a result of appendicitis compounded by a blow to the stomach.

“He really was involved with the new media of this time. He was a savvy marketer,” said Rapaport while taking a short break from installing the more than 160 objects, including advertising posters and broadsides that Houdini used to promote his shows.

Also on display will be works by artists influenced by Houdini and magic apparatus he made famous: handcuffs, shackles, a straitjacket, a milk can and a packing trunk, as well as a re-creation of the famous Water Torture Cell.

Included, too, are everyday objects like those used in the East India Needle Threading Trick, where Houdini would swallow needles and thread before slowly pulling the line from his mouth with the needles threaded on it.

As for Oct. 31, Rapaport doesn’t expect anything unusual to happen.

“You’ll be the first one to know,” the curator quipped.

The Jewish Museum also will be presenting a panel discussion titled “Conjuring Houdini in the Popular Imagination.” Dorothy Dietrich, a magician who has appeared on stage and TV, will be among the panelists.

Dietrich’s Houdini-related expectations for Oct. 31? She’ll be waiting for a sign.

“At 1:26 p.m., the time when Houdini died, a group will sit around a table and join hands,” said Dietrich, who will function as the medium at a seance run by the Harry Houdini Museum in Scranton, Pa., where she is co-director.

At the given moment, Dietrich will begin the seance by saying, “Houdini, if you are here, give us a sign.”

“Houdini said that if he can’t escape from the other side, then no one can,” said Dietrich, who is known for having duplicated many of Houdini’s famous escapes.

In recounting the history of the Houdini seance, Scranton museum co-director Dick Brookz explains that for 10 years after Houdini’s death, the magician’s wife, Bess, would hold a seance on Oct. 31. Once she stopped, the tradition was passed on to others.

Ever fearful that frauds would take advantage of his death, untimely or otherwise, Houdini provided his wife with a code to authenticate his return.

“The code was based on ‘Rosabelle Believe,’ ” Brookz related. “It was the name of a popular song of the time.”

The museum’s seance will be open to the public for a fee.

“People can also try and contact Houdini that day, and e-mail us with a report,” Brookz said. The museum’s email address is magicus@comcast.net.

The museum’s website advises “No kooks please, this is a serious seance test and seance tribute.”

After Halloween, another participant on The Jewish Museum’s panel discussion, magician George Schindler will be among several magicians paying their respects at Houdini’s grave at the Machpelah Cemetery in the Queens borough of New York City. Houdini is interred there in a bronze casket created for his buried-alive stunt.

Schindler, the dean of the Society of American Magicians, and the others at the cemetery will be remembering Houdini at a ceremony that includes Hebrew prayer.

“We used to perform the ceremony on Halloween, but it became too much of a zoo,” he said. “So we moved it to the Hebrew date of his death. This year the dates coincide, so we are doing it on the day he was buried, Nov. 4.”

Schindler and members of his society informally take care of the Houdini grave site.

“We clean it up, clearing it of playing cards, handcuffs, coins,” he said.

Schindler noted that in the “broken wand ceremony” the magicians hold for Houdini, the wand, broken in the silence of the cemetery, symbolizes the magician’s death.

Houdini was concerned for the welfare of other magicians and performers, Schindler said, and toward that end he started an organization to help them and the Red Cross.

Rabbis’ Sons, as it was called, raised $8,000 to aid the Red Cross, according to a 1918 edition of The New York Times. Among its members: Al Jolson and Irving Berlin.

“Upon his death, his wife, Bess, left $1,000 to the magicians’ society for a Houdini Fund,” Schindler said.

“The fund, now around $300,000, is used to support magicians who have fallen ill or who have been injured. It covers expenses not normally covered by insurance like wheelchairs, nurses and comfort assistance.”

“At the graveside ceremony a rabbi is present,” he said. “We say Kaddish.”

(Edmon J. Rodman is a JTA columnist who writes on Jewish life from Los Angeles. Contact him at edmojace@gmail.com)