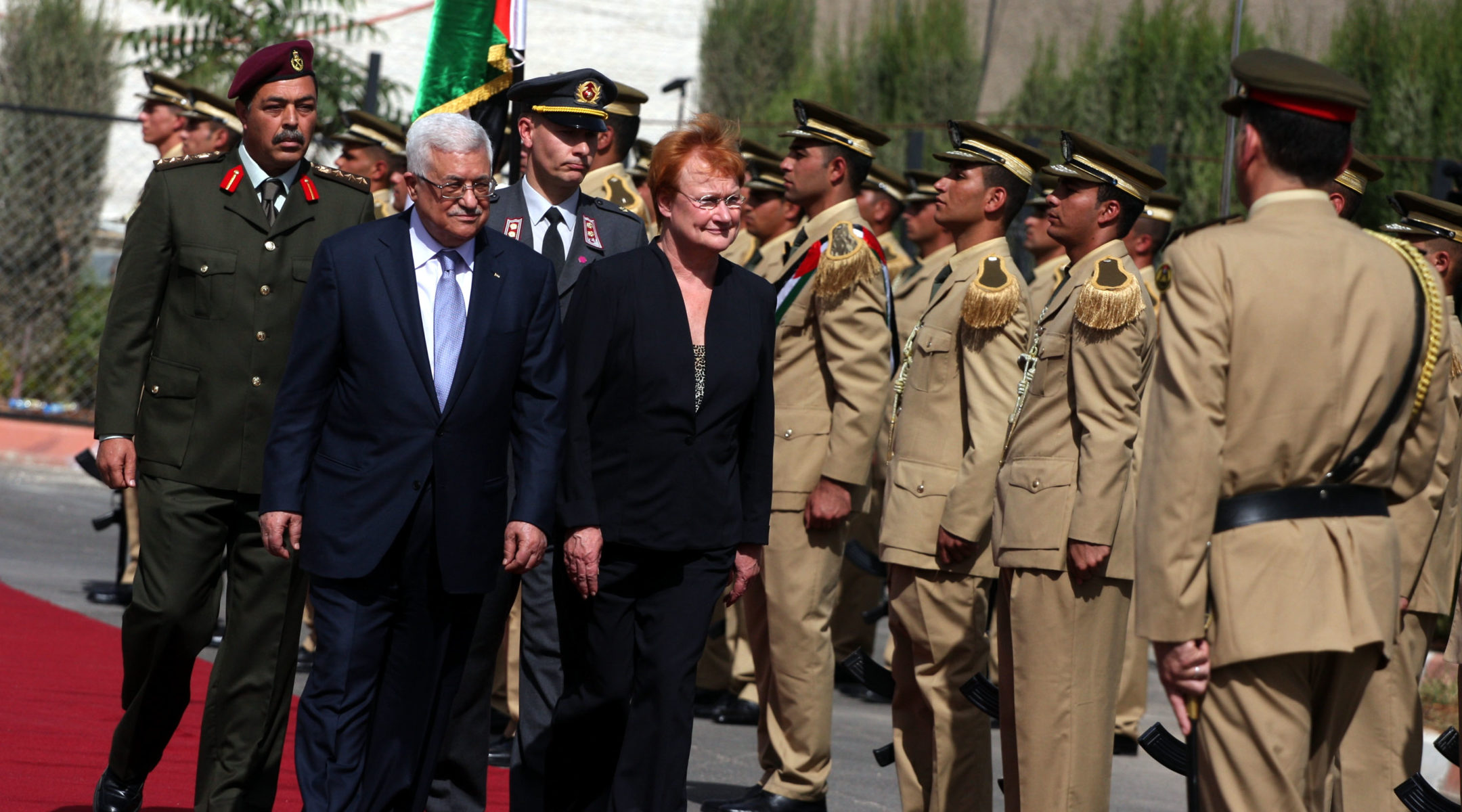 JERUSALEM (JTA) – With talks at a stalemate and no agreement from the Israelis to reinstate a settlement freeze, the Palestinians are playing a new card: an end game to statehood through an appeal to the international community.

The card hasn’t actually been played, but the mere threat that the Palestinians would push for international recognition of a state from the United Nations has been enough to push the Israeli government to reconsider options to return to the negotiating table.

On Sunday, partly to pre-empt a Palestinian move toward statehood that would bypass negotiations with Israel, Israeli Prime Minister Benjamin Netanyahu said he is working intensively with the Obama administration on a formula to restart the stalled peace process.

“We are in close contact with the American administration with the aim of restarting the peace process,” Netanyahu said at his weekly Cabinet meeting. “Our aim is not only to renew the process, but to renew it in such a way that it won’t collapse in a few weeks or in two months, but that we will go into a full year of serious negotiations on the core issues in an effort to reach a framework agreement on the way to a peace deal.

“Any attempt by the Palestinians to circumvent this process by going to international organizations,” he said, “is not realistic, and will not in any way advance a genuine peace process.”

Israeli, Palestinian and U.S. leaders all say publicly that a negotiated peace deal is much preferred to unilateral steps that could spark a sharp response from the other side. But the Palestinians warn that if the direct peace talks remain on hold, they will consider approaching international bodies for recognition of a Palestinian state along the 1967 borders with eastern Jerusalem as its capital.

It isn’t clear whether this is merely a tactic to frighten Israel back to the peace table — talks that were renewed in early September broke down four weeks later over Israel’s refusal to extend a building freeze in the West Bank — or part of a new strategy aimed at achieving a better deal for the Palestinians through the international community.

Either way, given Israel’s precarious position on the international stage and the lack of international support for its West Bank settlement construction policy, the Palestinian threat carries weight and is being taken very seriously in Jerusalem.

Much depends on the American stand, which gives the Obama administration added leverage over Israel.

The new Palestinian thinking has been evolving over the past few years and is based on two key principles: winning enhanced international support for Palestinian goals and, in parallel, building the institutions of a functioning Palestinian state from the bottom up.

The idea is that if the American-mediated peace process with Israel proves fruitless, the Palestinians can invoke Plan B: Gaining the world’s approval for an already functioning Palestinian state, on conditions favorable to the Palestinians, at a time of their choosing.

With Palestinian confidence in the Israeli government on the wane and Israel’s international standing in decline, Plan B has emerged as a genuine threat to Israel.

Recognition of the Palestinian Authority by the international court not only would open a crack for the possible prosecution of Israeli civilian and military leaders, it also would hand the Palestinians a major PR victory in their quest for internationally recognized statehood. The Palestinians would be able to cite the court’s recognition as legal backing for their case for a state.

Last week the court’s prosecutor, Luis Moreno-Ocampo of Argentina, heard arguments from legal experts, backed up by nongovernmental organizations, from both sides. The Israeli side argued that the Palestinian Authority is not a state and therefore cannot claim standing before the court, and that in any event, the court is not empowered to prosecute a state like Israel, which has effective and credible legal mechanisms for dealing with suspected war crimes.

A decision is not expected for several weeks.

If the Palestinians do press ahead in earnest with Plan B, the United Nations will be the main battleground. Given the certain backing for a Palestinian state by the non-aligned and Muslim states, the Palestinians easily would be able to secure a majority in the General Assembly — the same body that granted Israel international recognition in November 1947 by a vote of 33 to 13.

But the Palestinians want more than mere recognition: They want a binding allocation of territory based on the 1967 borders. For that they will likely seek a resolution from the U.N. Security Council, whose votes are binding. Such an effort likely would be blocked by the United States, which has veto power in that body. Therefore, for such a gambit to work, it would need to have the backing of the Obama administration. That’s unlikely.

In the run-up to a crucial Arab League meeting in early November that will discuss the stalled Israeli-Palestinian peace talks, PA President Mahmoud Abbas has been canvassing Arab leaders on his U.N. strategy.

The Palestinians see an important convergence in early November of key events for the future of the peace process: the Arab League meeting and the U.S. midterm elections. They believe that after the midterm elections, President Obama will have a freer hand to deal with Israel and will press Israel to return to the negotiating table on the Palestinians’ terms to head off any U.N. strategy.

For Israel this constitutes a major headache. The Netanyahu government fears that many countries, including the Europeans, would go along with the Palestinians and recognize a Palestinian state based on the pre-1967 border between Israel and Jordan.

If Israel remains in control of large swaths of the West Bank after a Palestinian state is declared and recognized, even if it’s just in the General Assembly, it would further sink Israel’s international reputation and provide additional fodder for the campaign to delegitimize Israel.

“The Palestinians will declare a state. Virtually the whole world will recognize it. And we will be left without security arrangements,” Israeli Trade and Industry Minister Benjamin Ben Eliezer said Monday.

Israel’s response to the challenge has been a combination of defiance and diplomacy.

“Like Ben-Gurion, Netanyahu will not allow the United Nations, or any other organization, to dictate our borders,” Israel’s U.S. ambassador, Michael Oren, said last Friday. “They will be determined through negotiations.”

Privately, some Israeli Cabinet ministers have been proposing unilateral Israeli responses, such as Israeli annexation of a significant part of the West Bank or redeploying inside the large settlement blocs to create a de facto border along Israeli terms.

Behind the scenes, Israeli diplomats have been warning their colleagues in Washington and Europe that if the Palestinians act on the U.N. strategy, the current peace process, and the Oslo process on which it is based, would be over.

For now, however, Israel is focusing its efforts on putting direct Israeli-Palestinian peace talks back on track and undercutting the Palestinians’ U.N. strategy. Netanyahu’s special envoy, Yitzhak Molcho, is in Washington this week working with his American counterparts on the details.

“Peace will only be achieved through direct negotiations,” Netanyahu said Sunday, “and I hope we will return to this avenue in full force very soon.”