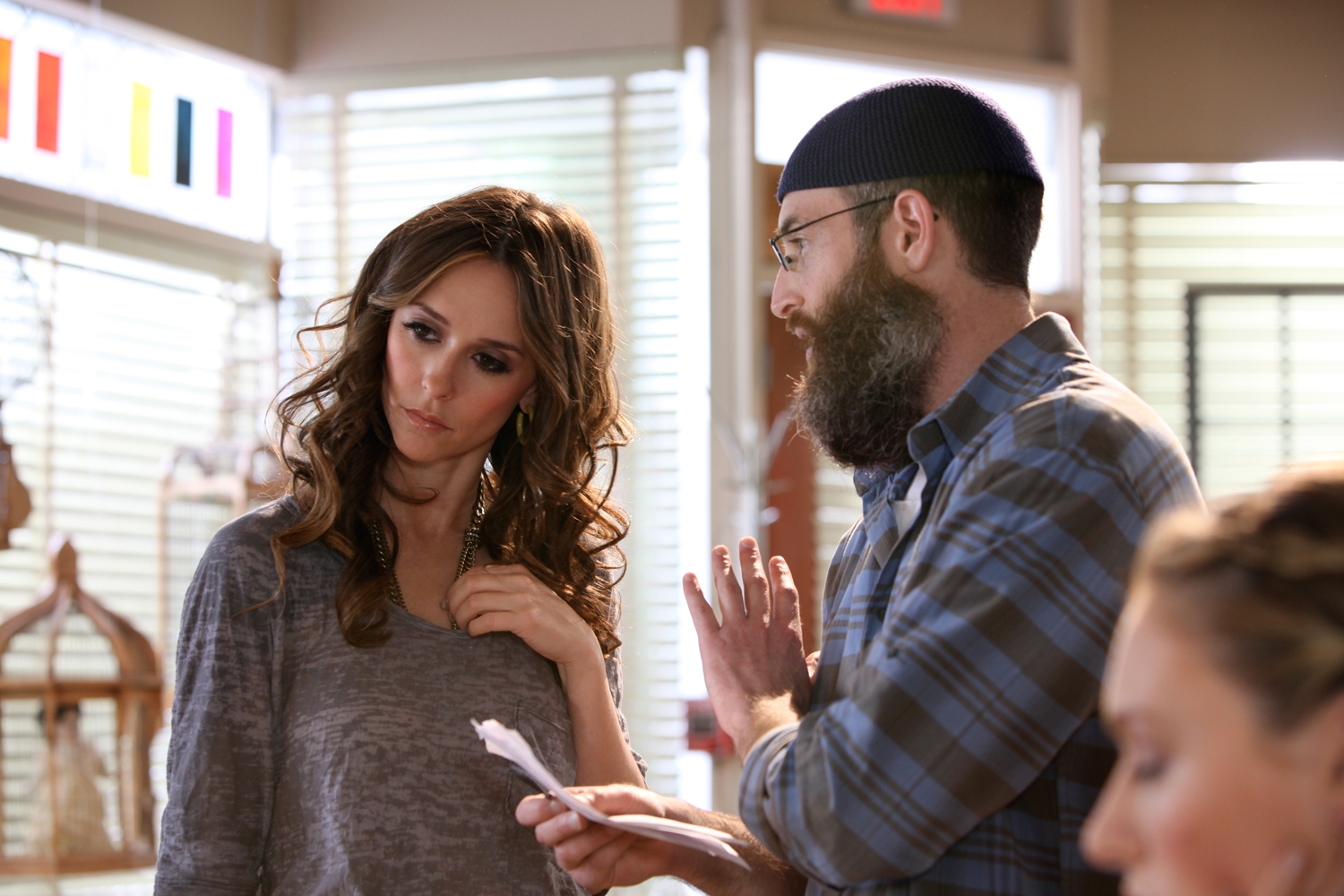 Filmmaker Marc Erlbaum with actress Jennifer Love Hewitt during the filming of "Cafe," May 2009. (Courtesy of Nationlight Productions)
Advertisement

NEW YORK (JTA) — What was Elisabeth Moss, star of the AMC hit series “Mad Men” and an avowed Scientologist, doing hanging out with a Lubavitcher Jew?

They were making a movie together to promote “tikkun olam,” the Jewish value of repairing the world.

The product of their work, “A Buddy Story” — a romantic drama about a singer-songwriter who finds love on a weeklong trip with his neighbor — is expected to make it to the silver screen next  year.

It’s just one of several films that Marc Erlbaum, an Orthodox “ba’al teshuvah,” or returnee to the faith, is making with Hollywood stars to promote positive messages to movie audiences.

“I am a religious person,” Erlbaum told JTA. “I very much believe in tikkun olam and the core Jewish values of hope, self-sacrifice and mutual helpfulness.”

Aside from Moss, actors Jennifer Love Hewitt, Will Ferrell and Jamie Kennedy are involved in film projects at Erlbaum’s production company, Nationlight Productions.

“I adore Marc; he is such a wonderful and funny man,” Moss told JTA in an interview. “He was the first interaction I had with the Orthodox community. Although I was exposed to so many different people growing up in New York, I didn’t know what to expect, but he is so cool and funny. It was a terrific experience.”

The journey that brought Erlbaum, 40, from the real estate business to independent filmmaking also had something to do with the journey that transformed him from a casual Jew to an Orthodox one.

Erlbaum discovered Orthodoxy during his college years, when his father began bringing a Chabad-Lubavitch rabbi to their Philadelphia home to talk religion. Erlbaum hadn’t thought much about his Judaism, but he quickly became captivated. The rabbi soon had a transformative effect on him and his two brothers.

“We were all stimulated and realized we actually knew nothing about Judaism,” Erlbaum said.

In time he became strictly observant. Erlbaum, along with his wife and family, embraced Orthodoxy.

Erlbaum had worked at his family’s bridal chain and founded a Philadelphia real estate agency before turning to writing. By 2005 he already had written, directed and co-produced a short film.

It wasn’t enough. Erlbaum said he needed to do more to spread the positive messages about human values he had found in Judaism.

So in 2009, Erlbaum said, he decided to launch a film production company “focused on creating inspiring, meaningful content for mainstream audiences of all backgrounds and affiliations.” He sees his work as promoting Jewish values.

“There is no better way than film to reach people, and I have the power to be that ‘or lagoyim,’ or ’nation light,’ like the production company’s title,” he said. Or lagoyim is Hebrew for “light unto the nations.”

Erlbaum’s latest drama, “Cafe,” starring Hewitt and Kennedy, is about a Philadelphia coffee shop where the stories of workers and customers dealing with life challenges intersect to weave a web of spirituality. The film, though not yet in wide release, was shown at the 2010 Philadelphia Film Festival.

“Although there is no explicit Jewish content in the film, the values certainly guide the characters in their development,” Erlbaum said.

In addition to Moss, “A Buddy Story” features Orthodox Jewish hip-hop star Matisyahu. The film was shot more than three years ago and is now in post-production.

Moss said it was the storyline that drew her into the project.

“I just loved the plot — it’s such a simple love story and it really has uplifting moments to it,” she said.

Erlbaum laments the fact that Hollywood makes so few such films, and he recently started a Facebook campaign to encourage studios to make more positive, family-oriented films with uplifting messages. He also is starting a campaign he calls “Filmanthropy” to encourage donors to support the production of films that promote the value of tikkun olam.

“There is definitely a cynical edge to media, and we as a society act accordingly, and that is too bad,” he said.

By producing uplifting films, Erlbaum said, he hopes to increase the positivity that will make people act more respectfully and kindly toward each other.

“I believe that everyone should be more thoughtful and giving,” he said. “We are not here to push for Judaism. I believe that everybody can do something significant for others, and I’m glad I have a medium like film to express that.”