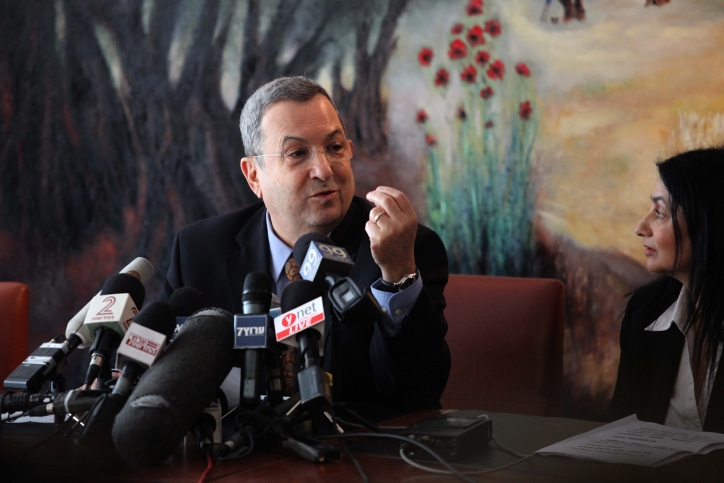 JERUSALEM (JTA) — Was it an act of political self-preservation, a feat of political destruction or a bid to stabilize Israel’s government ahead of some dramatic move?

And for Israel’s Labor Party, was it another sign of the once-leading party’s demise, or a precursor to a revival and the ideals for which it stands?

What’s certain is that Defense Minister Ehud Barak’s decision this week to quit Labor, which he had headed until Monday, has sent shock waves throughout the Israeli political establishment.

Ironically, the split of Labor — until this week a part of the Israeli government but now in the opposition — may yet strengthen the coalition of Prime Minister Benjamin Netanyahu. Barak’s decision to quit Labor and found a new political party along with four other Labor defectors leaves Netanyahu with eight fewer members in his coalition, but the 66 who remain are considered far more stable than the 74 he had pre-defection.

Before Barak’s dramatic announcement, Labor was threatening to withdraw all 13 of its Knesset members unless Netanyahu could show real progress in peacemaking with the Palestinians. That would have left the prime minister with only 61 coalition members, the vast majority right-wingers and the minimum necessary to stay prime minister in the 120-seat Knesset. Such a narrow coalition would have opened up Netanyahu to harsh domestic and international criticism for leading a perceived hard-line government.

Now, in what appears to have been a coordinated move, Netanyahu and Barak have pulled the rug out from under the feet of their opponents. With a more stable coalition, Netanyahu almost certainly has secured a full term in office, until 2013. Barak pre-empted attempts to oust him as Labor leader and force him to leave the Defense Ministry by cutting a deal in which he can stay on as defense minister after leaving Labor.

Many Israelis on the left and right viewed Barak’s move with deep skepticism. The new party he heads, called Atzmaut, which means Independence, has a hazy future other than the assurance of four ministerial berths in Netanyahu’s government and the chairmanship of a Knesset committee.

The leader of Israel’s opposition, Kadima Party leader Tzipi Livni, called it the “dirtiest and ugliest maneuver” in Israel’s political history. Her own party was a breakaway from Likud in November 2005, when then-Prime Minister Ariel Sharon led an exodus of moderates, including Livni, from the Likud.

The regional implications of the upgraded Netanyahu-Barak partnership could be far reaching.

Barak and Netanyahu, however, put a much different gloss on things. Until now, the Palestinians had been hoping for the Israeli government to fall and be replaced by one more amenable to their demands, representatives of the two men argue, and this has kept the Palestinians away from serious peace talks. Now, with a more stable government, the Palestinians will see this is who they have to deal with for the foreseeable future and may become more serious about returning to the negotiating table.

Furthermore, Netanyahu and Barak confidants have been dropping broad hints that a new Israeli peace initiative is in the offing, suggesting that this is the part of a the Netanyahu-Barak understanding.

There is another theory for Barak’s move: that Netanyahu is seriously contemplating a pre-emptive strike against Iran’s nuclear installations and believes he needs Barak at his side. According to this line of thinking, with the Labor Party threatening to force Barak to leave the government, Netanyahu could have found himself with a new defense minister who was less inclined to attack Iran. The front-runner would have been the Likud’s Moshe (Boogie) Yaalon, a super-hawk on the Palestinian issue but very cautious about striking Iran.

It would be understandable, commentators said, if Barak’s decision was part of a bid to revive peace talks with the Palestinians or take action against Iran’s drive toward nuclear weapons. But if not, the move is nothing more than a cynical act of political self-preservation.

In the media, Barak’s move was excoriated as a betrayal of those who voted for him and the party that had given him his chance in politics.

Barak’s leadership of Labor had been under severe threat. Would-be successors had called for an early party convention, expected to take place in late February or early March, with two issues on the agenda: deciding whether or not to stay in the government and setting a date for new leadership primaries. Within the space of a few months, Barak could have found himself out of the Defense Ministry and supplanted as party leader.

Barak says his new party will run in the next elections. But many Israelis are wondering if Barak really intends to make an electoral pact with Netanyahu and run on the Likud ticket.

Where does all this leave the Labor Party?

Many had accused Barak of ruining the party with his high-handed leadership style, lack of people skills and loss of ideological direction — and now delivering the coup de grace by splitting the party in two. Many Israelis believe that the party, whose leaders founded and built the state, holding uninterrupted power for Israel’s first three decades, has run its course and that a new left-center constellation will rise from the ashes.

But the eight former ministers and Knesset members who have remained in the party insist that it could still be at the heart of a center-left revival.

One of the contenders for the party leadership, Yitzhak Herzog, said Barak’s departure has freed Labor of its biggest obstacle in the way of rehabilitation, and now the party can rebuild and recapture some of its former glory.

“Labor got rid of the hump on its back,” he declared.

Party activists, especially the young guard, say that with Barak gone, people will rejoin in droves.

Labor overcame its first serious hurdle on the way to rehabilitation when four Knesset members led by former party boss Amir Peretz — who had been considering a second split off from Labor — decided to stay. But the four have made it clear that unless there is a modicum of cooperation with them, they will leave at a later date, precipitating another major crisis.

Much will depend on who takes over as Labor’s leader. Early polls showed that Herzog enjoys 20 percent public support, with former party leader Amram Mitzna and Knesset member Shelly Yacimovich each with 18 percent.

But these polls are largely irrelevant. It is not clear who the final contenders for the Labor leadership will be, what new parties will emerge before the next elections and what the center-left political map will look like.

More important, the results of the next election likely will be decided by how the new Netanyahu-Barak partnership fares. That has only just begun.