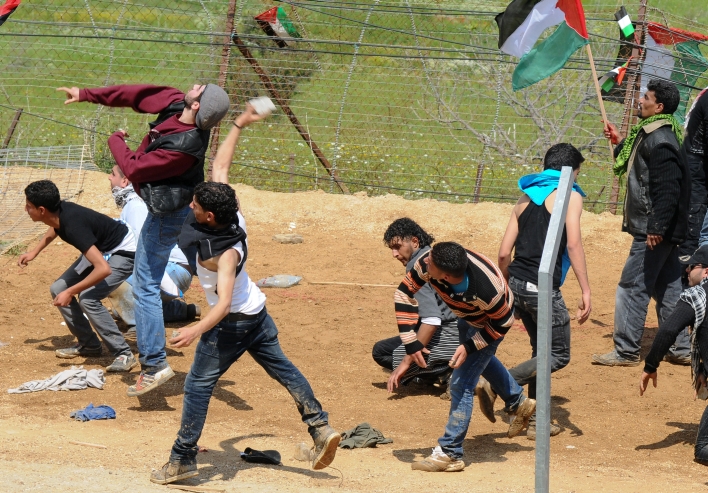 Arab demonstrators crossing over from Syria mark the anniversary on the 63rd anniversary of the Nakba throwing stones and holding Palestinian flags as they approach the village of Majdal Shams in the Golan Heights, May 15, 2011. (Hamad Almakt/ Flash90)
Advertisement

JERUSALEM (JTA) — While U.S. officials are running a full-court diplomatic press against the Palestinian bid for U.N. recognition of statehood this September and officials at international Jewish organizations are trying to convince foreign leaders to oppose statehood, the Israeli government appears to be taking a different approach: acceptance.

On Monday, Israeli Prime Minister Benjamin Netanyahu told a Knesset committee that there is no way to stop the U.N. General Assembly from recognizing Palestinian statehood.

“It would be possible to get a resolution that the world is flat” in the U.N. General Assembly, Netanyahu said in a jibe at the body, where anti-Israel resolutions have a virtual automatic majority. The Palestinians routinely have relied on the bloc of Arab and Muslims states and their allies in the non-aligned movement of mostly Third World countries to pass anti-Israel resolutions.

A senior Israeli official close to the prime minister said Israel is not particularly concerned about a vote for a Palestinian state in the General Assembly.

“We have very low expectations of the General Assembly,” he said. “Every year they pass at least 20 anti-Israel resolutions, including one condemning Israel for attacking the Iraqi nuclear reactor in 1981.”

Rather, the Netanyahu administration is relying on the fact that General Assembly resolutions do not have international legal standing and that in the U.N. Security Council, where resolutions do carry the force of law, the United States would veto any such resolution.

But Israel remains concerned, the official said, that the Palestinians will use a General Assembly resolution to harden their positions against any compromise with Israel.

For now, Israeli officials are focusing on trying to limit the diplomatic damage that a General Assembly resolution could cause.

“The president of the General Assembly said that even if a resolution passes, this isn’t statehood,” said a former Israeli ambassador to the United States, Zalman Shoval, who accompanied Netanyahu on his recent trip to Washington. “But there will be negative repercussions. Countries will certainly use it for anti-Israel propaganda. They may even try to take economic steps against Israel, like divestment.”

Israeli Defense Minister Ehud Barak has gone even further, warning of a “diplomatic tsunami” in September. Opposition leader Tzipi Livni recently attacked Netanyahu for failing to prevent the expected unilateral declaration of a state, saying he is a weak and inadequate leader.

“Netanyahu has failed to recruit international support for Israel’s basic principles,” Livni, the head of the Kadima Party, told the Knesset. “Israel needs a leader, and this government has missed an opportunity.”

During the previous Israeli government, when Ehud Olmert was the prime minister and Livni the foreign minister, she held many meetings with Palestinian Authority President Mahmoud Abbas. According to recent statements by Olmert and Abbas, they made significant progress on the issue of the future of borders of a Palestinian state.

Most Israeli analysts say it is unlikely that peace talks will be renewed before September.

“I think Netanyahu knows that any political initiative for restarting peace talks is a non-starter and that the Palestinians have no intention of returning to negotiations,” said Yossi Alpher, a former Mossad official and the editor of the joint Israeli-Palestinian website Bitterlemons.org. “His strategy is to hunker down and not to rock the boat.”

Israeli officials say their strategy to achieve a peace agreement with the Palestinians is the same as it always has been.

“The only way to achieve peace is through Israeli-Palestinian negotiations,” Israeli government spokesman Mark Regev told JTA in an interview. “There can be no outside imposed solution that will work. Everything else is at best a mirage, and a one-sided vote at the U.N. could well set back the peace process decades.”

There is growing concern in Israel that violence could return to the region after the Palestinian action at the United Nations in September, including a third intifada, or uprising. There have been campaigns online calling for a third intifada, including a page on Facebook that was removed by the social media company.

Former Shin Bet security chief Yuval Diskin, who retired this month, said he is “very worried” about what may happen after a unilateral Palestinian declaration and warned the situation could quickly deteriorate. A recent survey by the Israel Democracy Institute found that 70 percent of the Jewish public in Israel expects a new wave of violence following September. A majority, 58 percent, believed that the Palestinian Authority would encourage the violence.

In recent weeks Palestinian groups have been using Facebook and other social media to call on Palestinians living in countries around Israel to reprise the marches on Israel’s borders that took place on May 15, when Arabs marked Nakba Day — the anniversary of the “catastrophe” of Israel’s birth. This time, Palestinians are calling for marches to mark the anniversary of the 1967 Six-Day War, when Israel captured the West Bank. That war began on June 5, 1967.

Israeli officials, who were caught unprepared when hundreds of Arabs from Syria breached the Israel-Syria border and thousands more marched on the Lebanon-Israel border two weeks ago, resulting in Israeli and Lebanese fire that left some 14 protesters dead, said they will be more prepared this time.