Under the guise of a work-related assignment, 6nobacon writers Jew-Jew Barrea and Seamus McQuippah watched two seminal Sandler films from the 1990s (Billy Madison and Happy Gilmore) with the task of defending their favorites.

JJB:I believe that prior to this debate, we must agree on one thing: Haters gonna hate, but Adam Sandler is freaking hilarious. Agreed?

SMQ: Agreed. No hating on the “Hannukah Song” creator. But his production company, Happy Madison, has a whole yin-yang dialectic going on, where the “Happy” half is the only thing filling the glass.

JJB:Ha ha ha SHUT UP! I was expecting some resentment towards Billy Madison, but I thought we could at least wait a few exchanges before that, but if you want it, it’s on. BM is far superior to HG and there are plenty of reasons for that.

JJB:I have to admit, I think HG is a funny movie. It’s the only movie involving golf I would ever watch (if you discount the scene in Space Jam where Bugs Bunny is trying to grab Michael Jordan’s attention), but for crying out loud, it’s a movie about golf!

SMQ:Oh come on. HG is totally par for the course as a golf-oriented comedy. Where else can a chest-autographing session on the green and a fisticuffs-flinging Bob Barker leave room for moral instruction? Don’t get me wrong, BM has its moments, like the heartwarming “all the cool kids are peeing their pants” episode. But for a movie ostensibly centered around the classroom, BM offers little in the way of instruction, moral or otherwise that is applicable to real life. Watching this film in search of greatness mirrors Billy’s Quixotic hunt for the imaginary Antarctic penguin in the heat of the summer; those who assert its greatness are as sure of themselves as the protagonist is drunk for most of the film.

JJB: Well, like the bizarre old lady says when Billy and the kids go to the old farm: “if peeing your pants is cool, consider me Miles Davis!” The Bob Barker scene is pretty funny (have you noticed that it’s been about 15 years and Bob Barker hasn’t changed at all?!), but BM holds a lot more of educational values and plenty of very well-written characters developments. Look at Principal Anderson for example: At first he completely denies his past as the Revolting Blob, but later, when he realizes that if he accepts himself the universe can accept him, he ends up saving the day. Where do you see an example like that in HG? The supporting characters don’t get any recognition for their achievements except for Happy, of course. But for anyone else? You want the audience to identify with the characters!

SMQ: Scoff. Not to suggest that watching a Sandler film is liable to make us better people, but HG is way more likely to make us reflect on our relationships with others. Despite his imperfections (e.g. anger management issues, self-doubt regarding his career path), HG goes the distance to keep together a lot of durable relationships–working to redeem Nana and the house his grandfather built, setting up every girl’s dream at the ice skating rink
Virginia: I thought we were just going to be friends.
Happy: What? Friends listen to Endless Love in the dark.
Billy Madison’s love interests and friendships are as sloppily pasted together as his snowman project in first grade. 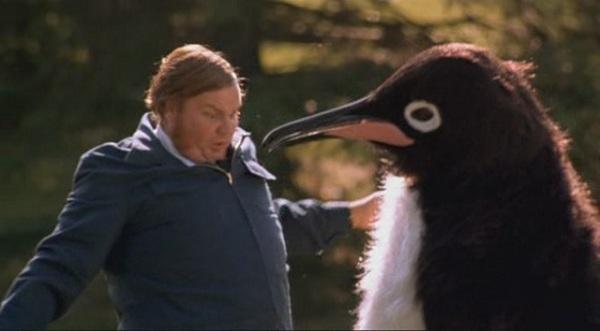 SMQ: Ticket to utter tomfoolery? It’s the exact opposite of HG, which starts off with a few bad pairings (Happy and his fed-up girlfriend, Happy and his one-night stand with a middle-aged Asian woman) and ends with him and Nana, Virginia and his no-longer homeless caddy. Oh, by the way: another huge moral victory for HG. The new friends he makes along the way are friends forever.

JJB: But the kids! What about the kids?! Billy Madison shows us that you don’t have to be a member of NAMBLA to have friends who are significantly younger than you. Billy makes tons of friends on the way and they learned a lot from him. Sure, it’s a bumpy ride, but at least he doesn’t destroy a put-put golf station.

SMQ: See? Another satisfied BM viewer, another morally bankrupt NAMBLA-referencer! So big whoop, HG has a few less kids and far fewer fart jokes. Good riddance. You can’t extract a parable from BM’s gags. The best quote of the film is also the most telling:
Mr. Madison, what you’ve just said is one of the most insanely idiotic things I have ever heard. At no point in your rambling, incoherent response were you even close to anything that could be considered a rational thought. Everyone in this room is now dumber for having listened to it. I award you no points, and may God have mercy on your soul.

JJB: That’s true, Billy does get that response from the host, who is obviously distracted by “his wife, the tramp.” But if you recall, it’s because he compares the industrial revolution to the book “The Puppy Who Lost His Way.” Yes, the same book he learns about on his first day of first grade. I’m sure he could offer a better explanation to the industrial revolution, but instead he chooses to show the kids that you can learn from everything you are taught, and even a book about “Happy” (ha) the puppy, reflects on our every day lives. And you know what? At least he isn’t a sell-out like Happy Gilmore, aka the ancestor of Subway’s Jared…

SMQ: Oh, heaven forfend Happy Gilmore should try to be a responsible member of society by getting a job. [Shaking my head.] As stated earlier, he takes on that gig — and golf, which he finds boring — to redeem his Nana’s house. Speaking of Nana, I love how Sandler finds funny roles for older actors. Nana’s role in HG is way more substantive than the token colonial village tour guide in BM.  This is but one example that demonstrates that while all of Adam Sandler’s movies contain the same elements, the proportions in BM are deficient.  Billy Madison, like his own head, is “misshaped.”

JJB: You are completely ignoring one of the best older characters of the 90s featured in BM – The lunch lady.
Sandler is known for is affection towards lunch ladies (remember that SNL song?) and that is by far the most random yet hysterical moments of the movie. Your old lady is sweet and charming, but does she make the Sloppy Joes extra sloppy? I think not.

SMQ: Trying to justify BM with a tertiary character like the lunch lady is like trying to hinge HG’s virtues on the “Meesta Meesta” lady at the nursing home who gets whacked with an air conditioning unit. HG has real characters, ones whose sweet sense of empathy for the struggling other are enough to bring the sensitive viewer to tears. Case in point: HG could double as a date movie; watching BM more closely resembles a lobotomy.

JJB: So I want to focus on two things that in my opinion make BM better:
1. Cameos: Steve Buscemi, Norm McDonald, Robert Smigel and of course, Chris Farleyl> Ben Stiller, Bob Barker and Kevin Nealon.
2. The WTF moments, they are the key to this movie. Juanita the maid trying to get it on with Billy the penguin, Principal Anderson’s Valentine’s card (“P.S. I’m horny”), the old lady on the field trip (“I’ll tell you who stole those lunches – that damn sasquatch!”), the first grade teacher smearing herself in glue, and Steve Buscemi as a psycho with red lipstick. Can’t beat that. Especially when you see that they all get connected in the end.

SMQ: HG has plenty of cameos Bob Barker, Ben Stiller, Robert Smigel, “Jaws” from James Bond and also Kevin Nealon; not to mention a supporting role for Carl Weathers as beloved golf instructor Chubbs. It also has some magnificent random moments (Zamboni guy lip sync, Mr. Larson: “That’s two thus far, Shooter” Shooter: “Oh you can count, good for you.” “And YOU can count–on me waiting for you in the parking lot.”) The difference is that for HG, these quirky characteristics are mere garnish for a movie with heart. Put it in the same camp as “Big Daddy” and “50 First Dates;” not “Little Nicky” and “The Waterboy.”

JJB: And perhaps you hit the nail on the head — Why are we, Team Billy, love that movie so much. It’s because we will forever yell “O’Doyle rules!” after we bully someone. Or whenever someone talks about chlorophyll we will say how it’s “more like borophyll!” We will think that it’s perfectly normal for a song to end with a general question like “Do you have a piece of gum?” and sometimes, we wish we could smear ourselves in glue, chase imaginary penguins and go back to school. On the first day of class, we will change our Facebook status to “Back to school, back to school to prove to dad that I’m not a fool.” This will forever make us laugh as if we were chubby-cheeked kids in middle school, all over again.

SMQ: Let us agree to disagree. See you in the parking lot.