When the Michigan State Spartans football team faced the Ohio State Buckeyes last Saturday in Columbus, coach Mark Dantonio knew that winning in such a hostile atmosphere would require the full nine yards in motivational methods. So he did what every good coach does the night before the big game — he showed his players a movie.

And boy, there are so many good football films out there: Remember The Titans, Rudy, We Are Marshall, even Varsity Blues. But Dantonio broke out the equivalent of a reverse: Adam Sandler’s Waterboy. That’s right, the movie about the mentally challenged, water-loving southern kid named Bobby Boucher.

Dantonio took it pretty far, he even quoted Henry Winkler’s charachter, Coach Klein, during his halftime speech, as he told his men: “Visualize and attack.”

“It was a great movie for our guys they had fun with it,” Coach Dantonio said in the press conference after the game.

Boy did they: The Spartans beat Ohio State 10-7, Michigan State’s first victory over the Buckeyes since 1999.

Next week the Spartans are hosting the Michigan Wolverines for an all-state showdown. Since football requires outsmarting your opponent, I would suggest watching Billy Madison before the game. 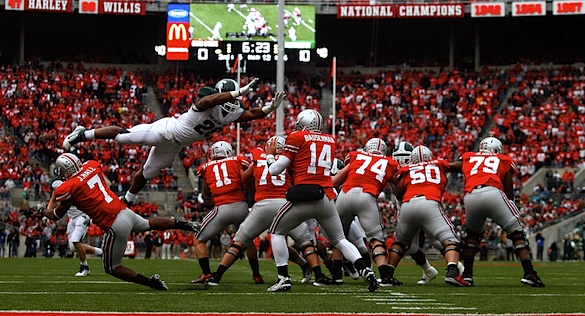