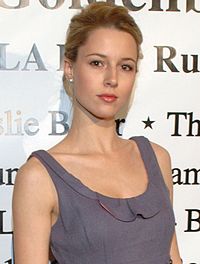 Yet another Israeli actress is doing it right in Hollywood. Alona Tal, a 28-year-old actress from Herzliya, will play Mark Wahlberg’s personal secretary in the new movie Broken City, which begins filming in 2012. The movie will also feature Russell Crowe and Catherine Zeta Jones.

Tal is a star among Israeli children for her role on the show “HaPijamot” (The Pyjamas). She moved to Hollywood three years ago and has already made appearances on Veronica Mars, Supernatural, Monk and even in the video game Halo: Reach. You may also remember her voice from the Wyclef Jean song “Party to Damascus.”

In addition to the film, she also plays the daughter of the Israeli prime minister on Israeli TV and the role of Zora on the new FX show Powers, coming out in 2012.

Hooray for yet another hot ambassador for Israel!