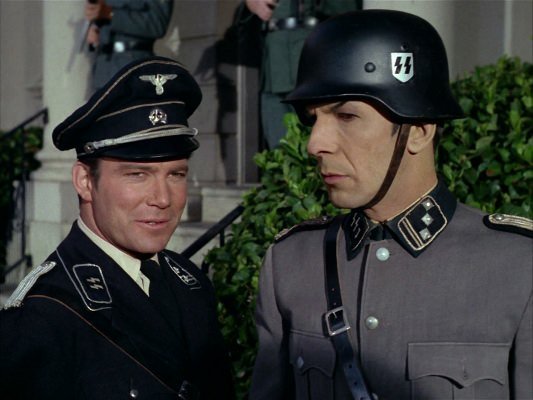 German fans of the original Star Trek series finally got to watch an episode that has been banned for almost 44 years.

“Patterns of Force” was originally aired is February, 1968. In the episode, Kirk, Spock and Dr. McCoy search for a Federation historian (who used to be Kirk’s professor) on the planet Ekos. When they get to Ekos, they find out that everybody is dressed up like Nazis. To make matters worse, the Ekonians, led by the fuhrer (who is the professor they are looking for and the one who applied Third Reich principles to Ekos) is in battle with the peaceful, technologically advanced people of Zeon, who are considered an “inferior race” to the Ekonians.

In a disturbing chain of events, both Jewish actors dress up as Nazi officers to try and stop the fuhrer. The episode was never shown in Germany when the show was aired there in the 70s, nor was it shown in reruns. It was dubbed into German and offered on pay-per-view channels but this is the first time it’s available on regular television.

One of the content editors at ZDF, the channel airing the program, said the episode is rated 16 and over for viewer discretion, and was aired after 10pm so it will be available for viewers who “could comprehend the difficult questiions that are risen in the episode.”

Watch highlights of the episode: