Mila Kunis had a ball with the Marines 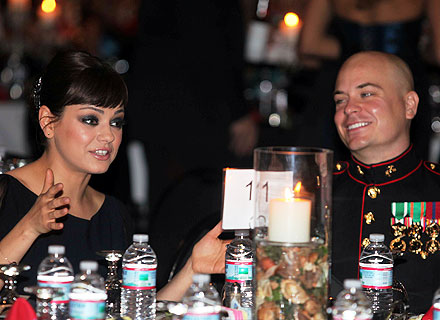 Yet another celebrity made it to the 236th annual Marine Corps Ball this weekend. This time it was GQ’s Man of the Year Mila Kunis, who followed Justin Timberlake’s footsteps as the distinguished date of Sgt. Scott Moore at the Greenville, N.C. ball.

Reminder: a few months ago, Sgt. Moore of the 3rd Battalion, 2nd Marine Regiment, posted a short YouTube clip asking Kunis to accompany him to this year’s ball. It took a few months until the clip became viral, but it eventually created an interesting trend of people asking celebrities out online. Justin Timberlake and Kristin Cavallari attended the balls. Scarlett Johansson and Betty White had to pass. Last week, we reported that a girl who is currently battling cancer asked Joseph Gordon-Levitt out after watching “50/50.”

According to People, a fellow Marine testified that Kunis “was very nice and very respectful.” The event focused on the troops that couldn’t make it to the ball. Moore’s unit lost seven men earlier this year, as Moore tweeted about it shortly before: “Tonight is for you 7 Betio Bastards!”

Apparently Kunis, who was wearing a black dress, seemed to be really into the traditions and ceremonies during the event.

Marine spokesperson Capt. Scott Sasser said before the event that, “She’s going to get a chance to learn about the Marine Corps, and we’re all going to have a great time celebrating the Marine Corps birthday.” After the event he only said that the two were “enjoying the night.”

Here’s to you, Mila Kunis, you deserve to be the Man of the Year. 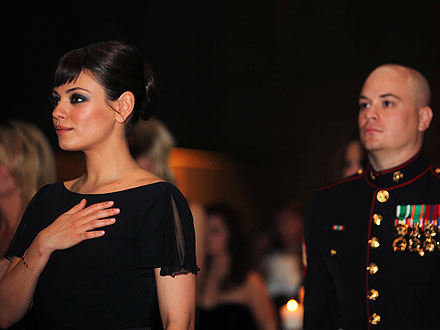