Where do Israeli haredim stand on haredi violence? 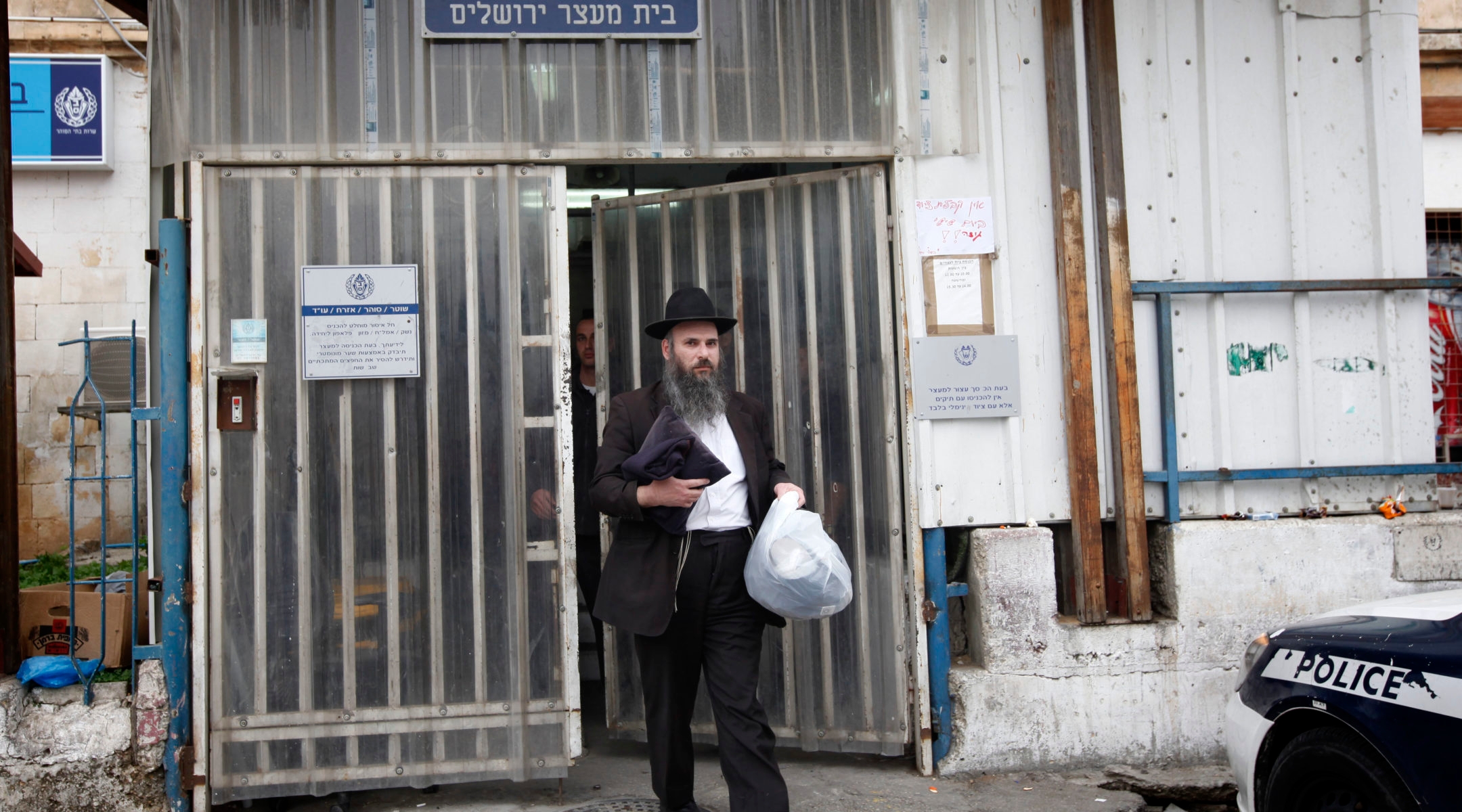 Shlomo Fuchs, a haredi Israeli accused of harassing a female soldier for her refusal to move to the back of a bus, is released on bail in Jerusalem, Dec. 30, 2011. (Miriam Alster / Flash90)
Advertisement 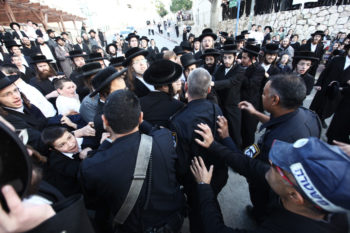 (JTA) — The cascade of condemnations started pouring in almost as soon as the Israeli TV report aired. It’s subject was  an 8-year-old girl harassed by haredi men on the way to her Modern Orthodox girls’ school in the Jerusalem suburb of Beit Shemesh.

The Israeli prime minister and president vowed that Israel would not tolerate haredi violence against women, whether directed at schoolgirls or women on public buses. Israel’s opposition leader, Kadima’s Tzipi Livni, went to a demonstration of thousands held Tuesday night in Beit Shemesh.

In America, too, the condemnations came fast and furious: Hadassah, the Jewish Federations of North America, the American Jewish Committee, the Orthodox Union, the Rabbinical Council of America and the haredi Orthodox umbrella body Agudath Israel of America were among the many groups that responded.

There appeared to be just one segment of the Jewish community that was staying silent about the violence: Israeli haredim.

That’s because there is some ambivalence among haredi Israelis when it comes to religious zealotry.

“The question isn’t how many haredim support haredi violence and how many do not,” said sociologist Menachem Friedman, an expert on haredi life and professor emeritus at Bar-Ilan University. “In all the conflicts involving haredi violence in Israel, from the British Mandate period until today, violent haredim were always a small minority, and I believe that the vast majority feel uncomfortable about them.

“The problem is that most haredim allow the extremists to act and do not stop them,” Friedman continued. “Some, perhaps a small segment, really do support the violence; some, perhaps a larger segment, do not support the violence but understand the extremists, believing that actions like these, even if they are not pretty, at the end of the day are a true expression of religious sentiments,” he said. “And the majority perhaps opposes the violence and knows that ultimately it’s bad for Judaism but doesn’t have the courage to go out and oppose it publicly.”

[RELATED: Haredi protesters slammed over use of Holocaust imagery]

There were one or two notable exceptions this week.

“If there are those in our generation who believe that warfare is the way to spread the light of Judaism, they are mistaken,” the Jerusalem-based leader of the Belz Chasidim, Rabbi Yissachar Dov Rokeach, said Sunday during the nightly Chanukah candle-lighting ceremony at his synagogue, which holds upward of 6,000 people.

Rokeach’s comments, though tepid by secular standards, marked a rare foray into current events by the rebbe, who has an estimated 45,000 followers worldwide.

But the roundabout way the rebbe’s message was delivered, and the scant media coverage given to haredi opposition to the violence aimed at non-haredim, is indicative both of the difficulties outsiders have with discerning shades of gray in haredi society and the ambivalence within the haredi world toward using violence to achieve religious aims.

For one thing, Israeli haredi condemnations of violence are not delivered the same way as condemnations in the non-haredi world. They are generally directed inward, not outward; they tend to be delivered not in statements to the press but as words of Torah to followers; they are often spoken not in English or Hebrew, but in Yiddish; and they are expressed less as a reaction to current events than as calls for dignified behavior by Torah-observant Jews.

“The Belzer rebbe is one of the few people who has the guts to say something,” Tuvya Stern, a haredi attorney who lives in Beit Shemesh, told JTA. “But he’s not going to condemn the extremists; that’s not his way. He’ll just advocate for a different approach.”

Rokeach’s speech, which was reported in haredi media and noted by Israel Radio, was unusual both because it referred to current events and because it was aimed, at least in part, at a wider audience: The rebbe had invited an Israeli Knesset member, Education Minister Gideon Sa’ar, to be with him when he delivered his speech on Chanukah’s sixth night. Because Rokeach made his remarks in Yiddish, it’s not clear whether or not Sa’ar picked up on their significance.

Rokeach’s reaction, however, was exceptional. Most haredi leaders stayed silent.

The violent zealots are drawn largely from the Edah HaHaredis, a community of anti-Zionist haredim that is particularly strict even by haredi standards and has strongholds in Jerusalem and Beit Shemesh. The Edah is closely aligned with the Satmar Chasidic sect.

Haredi support for fighting a culture war against secularism extends beyond the Edah HaHaredis, but most haredim who espouse such views won’t go so far as to become defenders of the faith themselves. Haredim often invoke a classic metaphor to describe this approach: You may not want to live with a cat, but you need cats around to eat the mice if you want to prevent infestation.

Similar behavior can be found in certain Islamic societies and fundamentalist Catholic and Protestant communities, Friedman said, noting that a key difference with haredim is that any violence is relatively limited in scope, not involving serious injury or death.

Then there are haredim who oppose extremism but fear speaking out because they do not want to be seen as lax in matters of religion.

When Rabbi David Kohn, the leader of the Toldos Aharon sect of Chasidim, spoke out a few years ago against religious violence via a Yiddish-language Torah exegesis of the story of Pinchas the zealot in the Book of Numbers, he quickly was condemned in placards posted around his neighborhood of Mea Shearim, in Jerusalem.

Other haredim don’t speak out because they see fights like the one in Beit Shemesh not as a battle between extremists and moderates but as part of a broader Israeli assault on haredi life led by the mainstream Israeli media.

“The source of the pollution is in halachah [Jewish law] itself,” former Knesset member Yossi Sarid wrote in a column published Friday in Israel’s daily Haaretz. Sarid called for the disqualification of haredi parties from the Knesset. On Haaretz’s English-language website, the article was titled “Orthodox Judaism treats women like filthy little things.”

Facing such hostility, some haredim say, why get involved at all?

And then there is the large segment of haredim who see themselves as totally apart from the haredim perpetrating the violence. Their attitude is that if it’s not their community members, it’s not their business and they don’t need to get involved.

While to an outsider all haredim may look alike — with their black coats, hats and beards — the haredi community is as fractured as the Jewish community as a whole. In Israel, the haredi community is divided between Ashkenazi and Sephardic, Chasidic and non-Chasidic, moderates and extremists. Within the Chasidic community, too, there are multiple sects — and sometimes even competing grand rebbes within the same sect.

But in a world seen by outsiders as monolithic, all haredim inevitably are associated with the extremism of a few, and haredi silence is seen as affirmation of haredi bad behavior.

That nonchalance is alien to the non-haredi Jewish world, where organizations and leaders go out of their way to denounce ideas, people or actions they find distasteful. That goes for everything from terrorist attacks to the bombing of churches in Nigeria, which at least four Jewish groups issued statements condemning this week.

When the main haredi umbrella organization in America issued its statement this week condemning the violence, it also took a shot at those denigrating haredim in general.

“Those who have taken pains to note that the small group of misguided individuals who have engaged in this conduct are not representative of the larger charedi community are to be commended,” the Agudath Israel of America said in its statement. “It is disturbing, though, that some Israeli politicians and secularists have been less responsible, portraying the actions of a very few as indicative of the feelings of the many. Quite the contrary, the extremist element is odious to, and rejected by, the vast majority of charedi Jews.”

Until haredim take to their synagogue lecterns, the airwaves or the streets, however, that’s a message that’s unlikely to be heard by the Jewish public.

To be sure, there were a few haredim who joined Tuesday’s demonstration in Beit Shemesh against the violence. Some were members of a new local haredi party called Tov (Hebrew for “good”) whose platform espouses moderation and open-mindedness.

“It was a very hard decision” because many of the protesters were engaged in anti-haredi sloganeering, explained Stern, the haredi attorney from Beit Shemesh, who is a leading Tov activist. “There were signs at the rally saying ‘Haredim leave Beit Shemesh.’”

Nevertheless, he said, it was important to make a public statement.

“There are rabbis in the haredi world who believe in violence as part of a religious duty,” Stern said, “but they are not a large group of people.”