For some schoolkids in southern Italy, meeting their first Jew on Holocaust Day 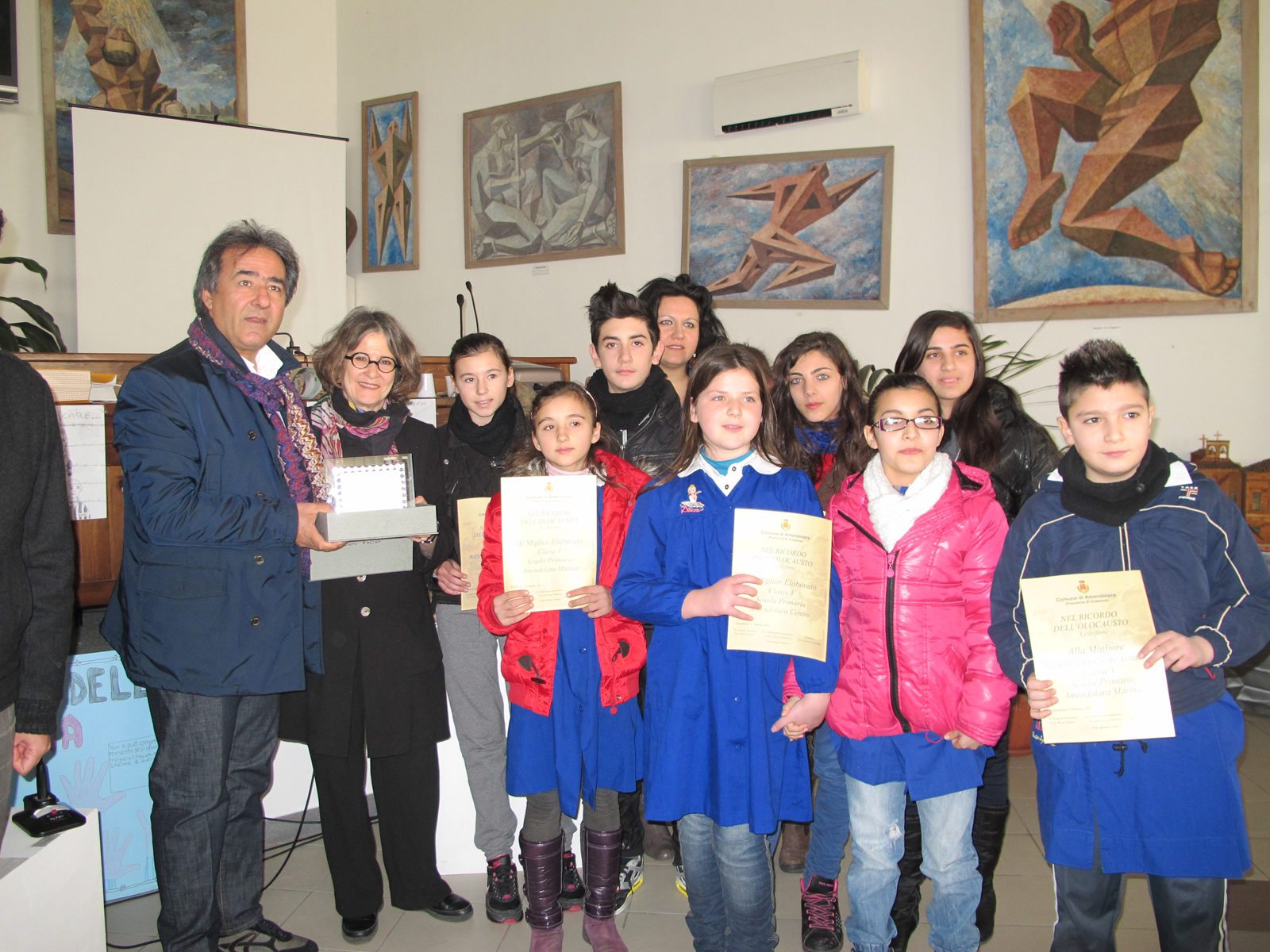 Amendolara Mayor Salvatore Antonio Ciminelli, left, standing next to JTA's Ruth Ellen Gruber, after presenting award certificates to some of the 100 schoolchildren who attended a Holocaust Memorial Day ceremony in the town hall, Jan. 27, 2012. The children received awards for art or writing projects about the Shoah. (courtesy of Amendolara Town Hall)
Advertisement

AMENDOLARA, Italy (JTA) — It was International Holocaust Memorial Day, and when I told my audience that I was a Jew, they burst into applause.

I was speaking at the City Hall in this ancient seacoast town in Calabria, deep in southern Italy on the instep of the Italian boot. My audience consisted of some 100 schoolchildren aged 10-13, along with their teachers, city officials and a few parents.

Italy marks Holocaust Memorial Day on Jan. 27 with an array of commemorative and educational initiatives, and schools all over the country organize special lessons, study units, projects and other programs on the Holocaust.

This year I was invited to Amendolara and Oriolo, another small Calabrian town perched high amid rugged hills, to speak to elementary- and middle-school students as part of municipal events.

In Amendolara and Oriolo, my presentations came at the end of a series of other speeches by local officials and educators. The mayors of both towns denounced the dangers of Holocaust denial.

“Democratic western countries must not forget that these democracies were built on the ashes of Auschwitz,” said Amendolara Mayor Antonello Ciminelli. “We must fight Holocaust denial; denying the Holocaust can lead to denying the legitimacy of the State of Israel.”

In Amendolara, the program included a film about the drawings made by children interned in the Terezin ghetto camp near Prague. In Oriolo, a young local woman who had written a novella set during the Holocaust talked to the kids about the book.

For my turn to speak, I wasn’t quite sure what to say. The kids had begun to fidget as the ceremony wore on, and I was concerned about keeping their attention.

So I decided to change gears. I wasn’t going to talk about the Holocaust per se, I told them. They had been studying that and were aware, I think, of the horror.

What they didn’t know anything about was Jews – Jews as living people, and not abstract Holocaust victims in striped pajamas or faceless components of the 6 million.

So, I told them, “I’m a Jew, alive and kicking” — and that’s when they applauded.

In a manner of speaking, my message was my very presence.

We are normal people, I said. We come in all shapes and sizes; some of us are rich, some poor; some are smart, some dumb; some are religious and others, like me, are not.

I recited the Shehecheyanu blessing, telling them that I thought it appropriate since I felt so moved and privileged to be able to meet with them.

Then I showed them pictures of the impact of the Holocaust — color pictures, not black and white shots or grainy film. They were pictures that illustrated the work I have done over the years documenting the synagogues, cemeteries and other remains of prewar Jewish life and also chronicling the rebirth of Jewish life in post-Communist Eastern Europe.

There was no time to take questions after the event in Amendolara. But later, a woman told me that tears had come to her eyes when I said I was a Jew.

And a group of girls came up to talk.

“You’re the first Jew we ever met,” they told me.

What did they think of that? I wanted to know.

“You must have lived through a lot,” one said.

The kids had studied the Holocaust in class and, as part of their lessons, had created artworks and writing projects. Some of the pictures they drew were displayed on the walls: There were Stars of David and human faces penned in by barbed wire, prisoners in striped uniforms with the caption “so as not to forget,” images of death-camp barracks.

One picture, I noticed, quoted the lyrics of a famous song about Auschwitz written in the 1960s by the Italian singer-songwriter Francesco Guccini.

“I died when I was a child,” the song begins. “I died with a hundred others. Passed through a chimney, and now I’m in the wind …”

About 30,000 Jews live in Italy today, but none, as far as I can tell, lives in either Amendolara or Oriolo. Calabria was home to a flourishing Jewish community in the Middle Ages, but Jews were expelled from the region 500 years ago.

Ironically, the largest Jewish presence in the region came during World War II, when Italy’s fascist government held more than 3,800 Jews, most of them from other countries, in the Ferramonti internment camp near Cosenza. Schoolchildren often visit Ferramonti as part of Holocaust education programs.

That evening in Oriolo, the program went on longer than anticipated, but the kids were eager to stay on and ask questions afterward.

“Did you lose any family in the Holocaust?” asked a girl who looked to be about 10.

I explained that no, my mother’s parents both had been born in the United States and my father’s parents had emigrated from what is now Romania more than 100 years ago. My relatives in Romania were deported to a labor camp in Ukraine and, as far as I know, survived. I showed pictures of myself visiting the grave of my great-grandmother, who had died in Romania after the war.

Then one boy of about 11 asked a question that I couldn’t even begin to answer. It was the question underlying the entire evening and decades of history.

“What,” he asked, “did the Nazis have against Jews? What made them kill them like that?”