Ahead of French elections, Sarkozy makes pitch to Jews 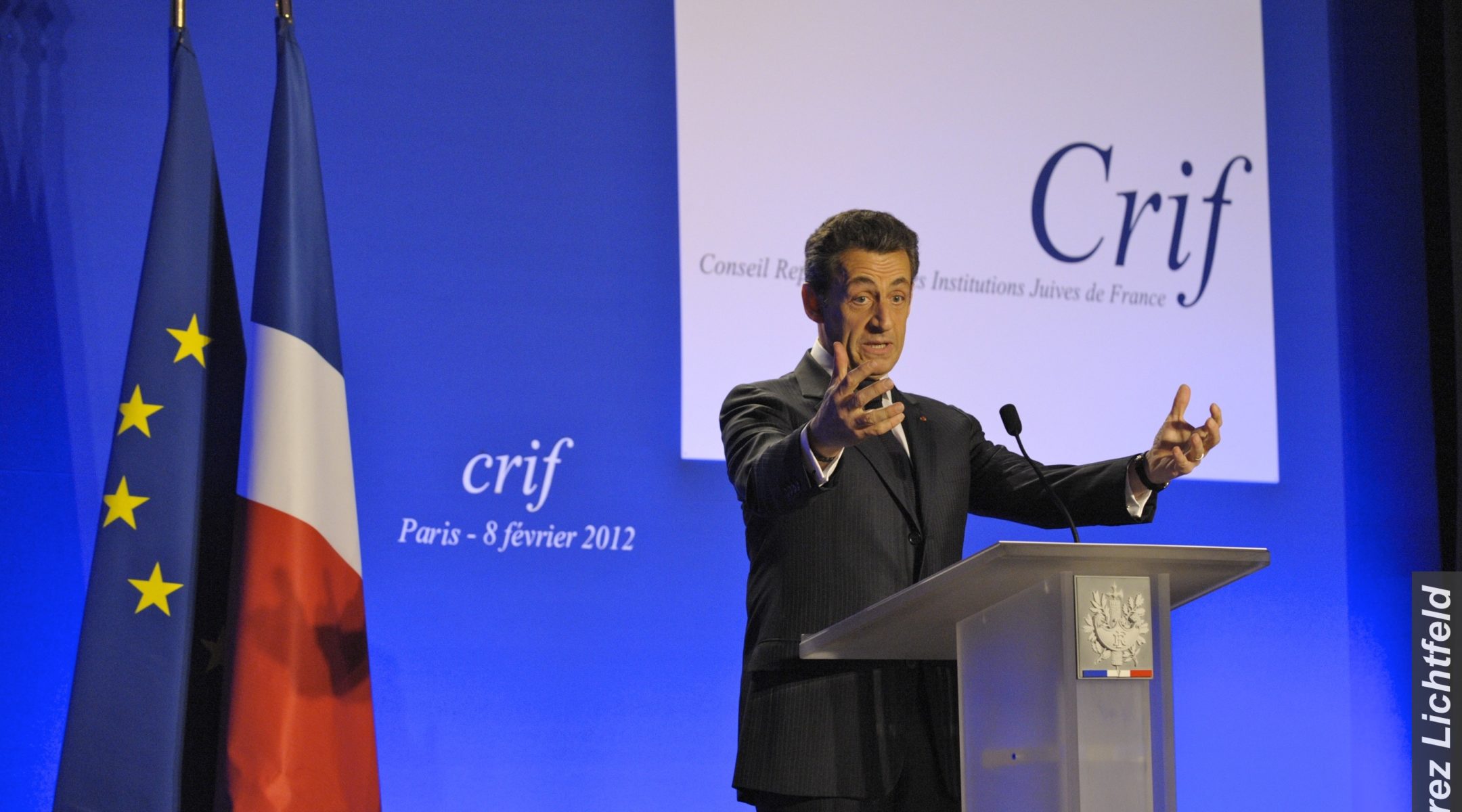 PARIS (JTA) – Trailing in the polls and with elections just 10 weeks away, French President Nicolas Sarkozy went to one of his most reliable bases of support — French Jews — to drum up enthusiasm.

On the morning of Feb. 8, Sarkozy met at Elysees Palace with released Israeli soldier Gilad Shalit, who holds dual French-Israeli citizenship. And later that day, the president addressed the annual dinner of the main French Jewish umbrella organization, the CRIF.

But with the French economy stumbling and some Jews less than thrilled with Sarkozy’s record on Middle East-related issues, he may not find the same kind of backing in the community as he did when he won the last French presidential election in 2007.

“A lot of Jews who voted for him are disappointed today,” said Ralph Bohbot, who was one of 1,000 Jewish community members at the CRIF dinner and identified himself as a member of the Alliance Centriste political party. “He didn’t know how to handle the economic crisis.”

Sarkozy has not officially declared himself a candidate in the elections, which has its first round of voting set for April 22. Polls show him trailing the Socialist candidate, Francois Hollande, by 32 percent to 25 percent. Hollande also was in attendance at the CRIF dinner. Marine Le Pen, leader of the far-right, anti-immigrant National Front, is polling at approximately 15 percent.

Despite the decline in support for the president among Jews, Sarkozy’s conservative Union for a Popular Movement party still remains far more popular among the country’s 600,000 Jews than among the general French population of 60 million.

Jerome Fourquet, analyst for the French Ifop polling center, says that 40 percent of Jewish voters feel “close to” the UMP, versus just 26 percent for the French in general. Another 40 percent of French Jews are associated with the political left, compared with 48 percent in the general population.

“A part of the Jewish community is pretty worried about its security, and that’s a platform that is pretty favorable to the right,” Fourquet said.

Sarkozy as interior minister during the second intifada was widely credited for cracking down on the wave of anti-Semitic attacks in France at the time — a national effort that continued into his presidency. He remains an outspoken supporter of Israel.

In a sometimes emotional speech to a crowd of approximately 1,000 at the CRIF event, Sarkozy called for Israeli-Arab peace, talked of the importance of sanctions against Iran and extolled the Jewish state.

But his speech wasn’t all pandering. He said the solution to the Iran problem should be diplomatic, not military, and expressed sympathy for the Palestinian cause. Sarkozy’s decision last October to vote in favor of Palestinian state recognition in UNESCO, the Paris-based U.N. cultural and science organization, riled many in the Jewish community, and Sarkozy addressed the issue in his speech.

“We also wanted to tell the Palestinians that there is a light at the end of the tunnel, that they too could be taken into consideration and listened to,” he said. “I know that by taking that position I could have troubled some of you, but if a friend of Israel doesn’t do it, who will?”

One Sarkozy supporter who asked not to be named said that Sarkozy “didn’t do everything perfectly, but the reality is that the alternative would be worse.”

Perhaps more than his record on Israel, France’s economic woes are diluting support for the president among Jews. Sarkozy has been criticized for his handling of the European debt crisis, his deference to Germany on economic issues and the prospect of austerity measures, which are cutting into consumer spending here.

Jewish critics of Sarkozy also note his inability to significantly influence the Israeli-Palestinian peace process and the failure of his Mediterranean Union project, which he envisioned as a new coordinating body for the countries that surround the Mediterranean Sea.

While many Jews may gravitate to the Socialist candidate in the upcoming elections, few are likely to vote for Le Pen, whose far-right party is seen as hostile to Jews despite her attempts to distance the party from its anti-Semitic past and its founder, her father, Jean-Marie Le Pen. Le Pen, who wants to outlaw public Muslim prayer, has tried to court Jewish voters, but Jewish community leaders say they won’t bite.

Frida Zeitouni, 62, a member of the Women’s International Zionist Organization, says that judging from the chatter at the dinner and among her friends, most French Jews will vote for Sarkozy. But in the south of France, where there are more tensions between Jews and immigrants of North African and Muslim backgrounds, Le Pen’s pitch may actually appeal to Jewish voters, Zeitouni said.

“There are a lot of immigrants, and the Jews there have had enough,” she said. “That’s why Prasquier says over and over, ‘Don’t vote le Pen!’ because some Jews will because there are so many Arabs.”

The leading opposition candidate, Hollande, is considered a supporter of Israel, and he recently met with CRIF leaders.

Robert Hue, a left-leaning senator and Hollande supporter, acknowledges that many Jews have viscerally positive feelings about Sarkozy. But he says that Hollande can do more for the community.

“Hollande has a steady position. It might evoke less of the emotional discourse that was heard tonight” from Sarkozy, he said, but Hollande “is more into factual reality, so that we can advance and get somewhere.”