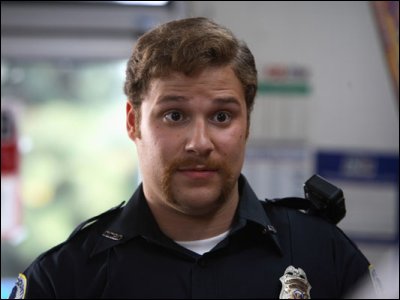 Rogen as Officer Michaels in Superbad

Seth Rogen is back in uniform for the first time since his hilarious portrayal of Officer Michaels in “Superbad.”

This time, Rogen will play opposite actor and comedian Kevin Hart in a film about interracial police partners. However, this one is a little different: Rogen and Hart will be portraying the first black-white police pairing in the 1940s.

The movie, in which the two investigate a drug ring, is a “period piece set in the post-World War II jazz scene,” according to a news release. Rogen and Hart will co-produce together with fellow writers and producers of the Judd Apatow gang: Evan Goldberg and Rodney Rothman.

Rogen’s last role was alongside Joseph Gordon-Levitt in the movie 50/50, and he is expected to release two new films this year: “Neighborhood Watch” alongside Ben Stiller, Vince Vaughn and Richard Ayoade, and “The Guilt Trip” with Barbra Streisand.

Kevin Hart’s most recent role was to be ejected during the 2012 NBA All-Star Weekend Celebrity Game, a game which earned him the MVP award.