Zoe Scheffy at her home with her knit seder table runners, her first design for a knit seder plate. (Penny Schwartz)
Advertisement 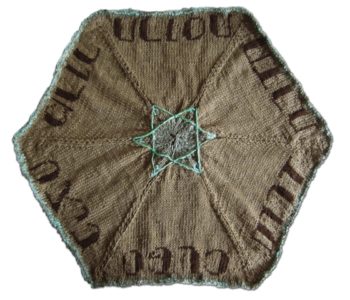 The three women, of different backgrounds, were making unique Jewish crafts that transformed their holiday celebrations from ho-hum to memorable.

Their ideas and projects are now featured in books and on Jewish Internet sites encouraging others to find crafts that enhance their Jewish observance of Passover, which this year starts on the evening of April 6, and other holidays.

Crafting is in, says Diana Drew, an editor of many craft books, including two by style maven Martha Stewart, whether as a reaction to an overly wired, fast-paced world or the harsh economy.

Scheffy and Frost are among the 30 artists and craftspeople from the U.S. and Israel whose work is profiled in Drew’s most recent book, “Jewish Threads” (Jewish Lights), which she co-authored with her husband, Robert Grayson. Passover projects include Scheffy’s knit seder plate, a quilted Ten Plagues matzah cover designed by Shellie Black of Seattle, and an afikomen envelope made of fabric designed by Claire Sherman of Berkeley, Calif.

More than a set of how-to instructions, the book reveals the spiritual journeys that inspired the artists to create their Jewish ritual objects or communal projects.

Drew and Grayson found a tremendous range and diversity of craft projects across the country. Drew noted to JTA the ritual objects for the seder table and playful props that infuse the Passover celebration with more spiritual meaning and a personal imprint.

Drew says that creating high-quality handmade Jewish objects reflects the concept of hiddur mitzvah, beautifying the commandments, and will evoke memories in years to come.

“That is what Jewish crafts bring to a person’s life and home,” she said.

In a conversation with JTA, Scheffy, a Boston-area mother of two with a doctorate in Scandanavian Sami folk art, said she was inspired to create her knit seder plate by her lifelong passion for fiber art. Rather than buy a conventional seder plate, Scheffy wanted to create one that combined tradition and innovation, a reflection of her own multicultural identity as an African-American and Jewish woman.

The hexagonal design of the seder plate, with six triangles, features a Star of David in the center. The Hebrew words for bitter herbs, egg, shank bone and other ceremonial foods are knit into the plate in a separate color.

While the idea of preparing her own seder was daunting at first, making the seder plate was a learning experience.

“I felt more prepared,” she said. The project also made an impression on her 9-year-old daughter, who took an active role in last year’s seder, Scheffy said.

Frost, a Britain native now living in New Jersey, told JTA that craft projects such as the Passover puppets became a way to express herself Jewishly and to learn about Jewish holidays along with her children. After years of attending her husband’s family’s traditional — and lackluster — seders, Frost, a Jew by choice and an educator by training, vowed to create a more accessible and livelier seder for her family.

At the time, she and her husband were raising their children in Houston. Inspired by the Exodus story retold in the Passover Hagaddah — and recalling how crafts were an important part of her own schooling in England — the mother of two created Afiko-Man, a hand puppet made of felt and fabric. In subsequent years Frost added Moses, Aaron and Pharoah puppets that often sat on the Passover table and were used for play or a re-enactment of the Exodus story.

Frost, who also made Purim puppets, created sets of the puppets for her children’s Hebrew school. Eventually she built a small crafts business: For many years she and her business partner sold their crafts at Jewish educator conferences and presented puppet shows for schools and synagogues. This year, more than two decades later, she is extending her tradition to another generation, making a new Afiko-Man puppet for her first grandchild.

Raising her young family in Nashville, Tenn., Brichetto was turned off by seders where children were unengaged and in another room. A seder at the home of a rabbi provided an aha moment. He included the kids, she recalls.

“I realized that seders don’t have to be adult centered and boring,” she said.

When Brichetto’s family decided to make its own seder, she and her children gathered up small plastic toys, Beanie Babies and household objects to make a crude version of a Ten Plagues bag. It was an educational way to connect, be engaged and have fun with the holiday.

Over the next few years the idea took off, with more elaborate objects to represent the plagues. The plague bags became such a hit that she and a friend went into mass production, starting a Judaica business with the plague bags and other craft projects.

While Brichetto has heard occasional criticism of invoking humor with the plagues, she says the bags provide a good conversation starter about demonstrating compassion for those harmed by the plagues.

In her role as a religious school teacher and in outreach with synagogue families, Brischetto discovered that hands-on crafts projects leveled the playing field for families from different backgrounds and religious experiences. There is value in making Jewish things with children, she said, from spending time together to educational moments to learn together about the holiday.

In 2008, noticing a void in resources for Jewish families, Brichetto started a website for Jewish parents, and Bible Belt Balabusta, a blog for Jewish do-it-yourself crafts projects. Now there is an explosion of interest for Jewish family engagement and home-based activities; she’s even heard from Christian preachers who use her site as a model for their religious outreach.

Words of wisdom from the craftswomen?

Don’t be intimidated, each advised.