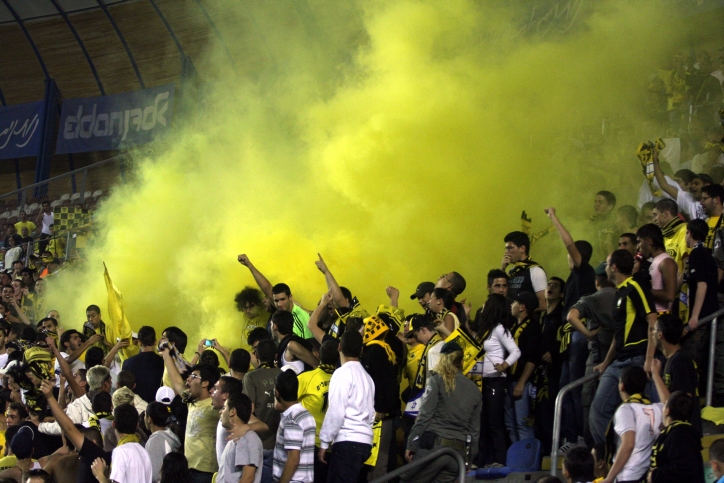 Fans of Beitar Jerusalem spilled onto the field four minutes before the end of a game on April 13, 2008. (Lior Mizrahi/Flash90)
Advertisement 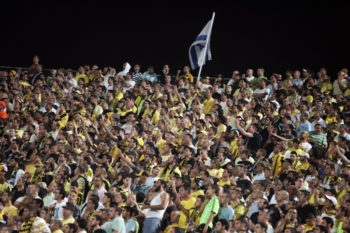 Fans of Beitar Jerusalem FC celebrate the winning in the State Cup in Ramat Gan Stadium on May 13, 2008. (Kobi Gideon/FLASH90)

JERUSALEM (JTA) — Sports fans aren’t the only people lately paying attention to Israeli soccer. A string of ugly incidents has caused Israelis to focus on the problems of violence and racism within the sport.

In mid-March, thousands of Hapoel Tel Aviv fans rioted on the field after their team lost to Maccabi Tel Aviv. A few days later, two fans of Maccabi Petach Tikvah attempted to attack a referee. In late March a Hapoel Haifa player was hospitalized after being headbutted by a Maccabi Petach Tikvah coach and then kicked in the head by a team associate.

But the event that drew the most attention had happened a few days earlier, when more than 100 fans of Beitar Jerusalem stormed from their home base in Teddy Stadium after a game to the nearby Malha Mall, where they chanted racist slurs and some reportedly beat Arab mall workers.

News reports quoted sources decrying the “pogrom” and “lynch” against the Arabs, and some commentators made comparisons with anti-Semitism in Europe and the recent murders at the Jewish school in Toulouse. Some sports writers called for sanctions by international athletic organizations or for dismantling the Beitar Jerusalem club, whose fans have a longstanding reputation for racism and violence.

Israeli police say that the news reports exaggerated the incident, though they have since made arrests.

“There was no ‘lynch’ and no ‘pogrom,’ ” Jerusalem District police spokesman Shmulik Ben-Ruby told JTA. “The incident has been blown out of all proportion.”

But Dorit Abramowich, coordinator for Shutafut-Sharakah, the Arab-Jewish Coalition for Shared Democracy, says the violence at the mall is indicative of a larger problem.

“Israel is in the midst of a racism plague, and the events at the mall are part of an intense series of events in which threats, intimidation and humiliation of Arabs is becoming accepted behavior,” she said. “I am saddened that the police and the leadership of Beitar Jerusalem are not more concerned and seem not to understand that words lead to actions.”

The story first made headlines several days after the March 19 incident, when video footage surfaced on the Internet showing masses of Beitar Jerusalem fans at the mall chanting “Death to Arabs.”

Exactly what happened next is unclear. Haaretz reported that some fans harassed a group of Arab women in the mall’s food court and were chased away by broomstick-wielding Arab janitors. According to Haaretz, the fans returned and attacked the Arab workers. A shopkeeper told the paper that Arab workers were thrown against store windows and beaten.

“They came looking to have a fight with us,” a Palestinian janitor at the mall, who identified himself only as Ahmed, told JTA. “When we tried to defend ourselves, they ran away, but then came back and tried to attack us.”

Police eventually broke up the melee but did not initially make any arrests because they said no complaints were filed.

On April 3, police released some 51 seconds of security surveillance footage from the mall that showed three Arab workers wielding sticks at some screaming fans, who fled. Ben-Ruby said that police have arrested some 19 fans, against whom charges will be pressed, while another 20 have been banned from the games for 2 1/2 years.

“We condemn all physical and verbal violence,” Asaf Shaked, a spokesman for Beitar Jerusalem, told JTA. “But there is a stigma against the fans of Beitar Jerusalem, and that’s why this incident has attracted so much media attention.”

Like most sports clubs established during the mandate and early state periods, the team grew out of a political party. Hapoel teams were drawn from the labor-socialist movements; Maccabi teams were allied with the non-socialist groups; and Beitar was an outgrowth of the revisionist Zionist youth movement founded in 1923 by Zeev Jabotinsky.

Beitar Jerusalem has won six national championships and played in numerous European competitions. It counts many prominent politicians and businessmen, Ashkenazim and Sephardim, from the left and the right, among its supporters.

But its core fans are traditionally oriented, right-wing, working-class males often from Sephardic backgrounds who tend to define themselves as outsiders against what they see as a left-wing establishment.

In 2005, hundreds of these diehard fans established the La Familia organization to support the team. Members of the group are largely responsible for the numerous penalties that have been imposed on the team.

La Familia members brazenly flaunt symbols of the outlawed racist Kach party founded by Rabbi Meir Kahane. They fill the eastern bleachers of Teddy Stadium dressed in their team’s yellow and black and screaming curses at Arabs and anyone they identify as a leftist. Most infamously, several years ago they booed during a moment of silence for assassinated Prime Minister Yitzhak Rabin.

“We are in a dialogue with La Familia and we believe that, thanks to that dialogue, the racist, violent behavior is decreasing,” Shaked said.

Social psychologist Itsik Alfasi, a self-described “diehard, forever true supporter of Beitar Jerusalem,” says the combination of class and ethnic protest, social alienation, popular religion and simple patriotism produces the racism inside and outside of the stadiums.

But he insists that “La Familia and their like represent a minority of the team. Most of the fans are working hard to get rid of this behavior, not only because it’s immoral but because it’s hurting us, too.”

“In contrast to the image of Israel as a racist society, soccer is actually a social equalizer, where Arabs cheer Jews and Jews cheer Arabs,” he said. “This could have a tremendously positive effect on the entire society.”

In fact, six Arabs are now playing on Hapoel Ironi, the little team that could from Kiryat Shemona, the northern development town known mostly because it has been a frequent target of Hezbollah rocket fire. The team recently won this year’s national championship.

Beitar, in contrast, has never had an Arab player. Shaked, the Beitar spokesman, said that if a “suitably talented Arab player were to come up, we would definitely consider him for the team.” But in the past when Arab players were suggested, their names were quickly withdrawn in the face of the vociferous and crude objections of the La Familia fans.

Almog, who describes himself as a “sworn soccer fan who goes to games every week,” says that in contrast to the recent incidents, overall violence in soccer is decreasing throughout Israel, and even within Beitar Jerusalem.

“We also have to remember that the anti-Arab rhetoric takes place in the context of the very real Israeli-Palestinian conflict and the terrorist attacks, especially in Jerusalem,” Almog said.

He acknowledges, however, that there is a point at which the rhetoric crosses a line and must be dealt with strictly.

“Calling for ‘death to the Arabs’ or screaming “Mohammed is a pig,’ like some of the fans of Beitar Jerusalem do, is violence and must be stopped,” he said. “This kind of behavior would never be tolerated anywhere else. In Europe, teams whose fans behave this way would be banned. But the Israeli police are weak and don’t enforce the law, and when they finally do, the judicial system hands out ludicrously lenient punishments.”

Ben-Ruby counters that the police are making “successful efforts to combat the violence.”

But Abramowich of the Arab-Jewish coalition argues that the Israeli government has not taken the necessary action to combat racism in general.

“Beitar’s Jerusalem’s behavior towards Arabs is an anomaly among soccer teams, but it is not an exception within Israeli society,” she said. “And I would have hoped that all of our leaders, including the prime minister, would denounce this violence because as Jews, we know where it can lead. But they have not.”