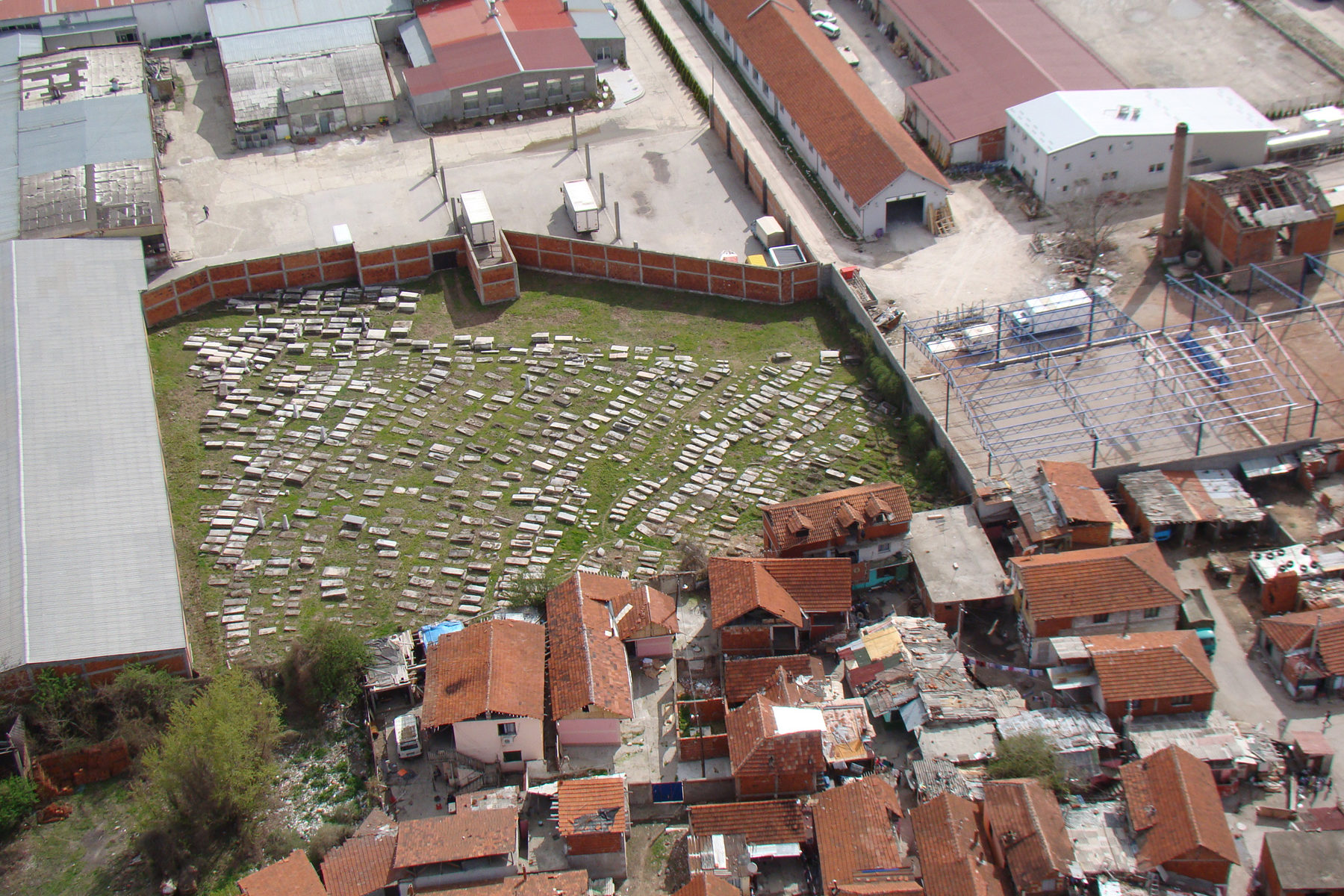 Arial photographs of the Nis cemetery surrounded by the new construction and the Roma village. (Photo courtesy of Ivan Ceresnjes)
Advertisement

Ivan Ceresnjes of the Center for Jewish Art in Jerusalem at a Jewish tombstone that can been seen in the Roma village built on top of part of the Jewish cemetery in Nis. (Ruth Ellen Gruber)

Ruben Fuks, president of the Federation of Serbian Jewish Communities, in the Nis Cemetery, with the new construction in the background. (Ruth Ellen Gruber)

NIS, Serbia (JTA) — In some alternate universe, it might be a Jewish dream: a Jewish cemetery with a restaurant and discount department store on its doorstep.

But in this old Serbian town about 125 miles south of the capital of Belgrade, it’s more like a nightmare, say leaders of the tiny Jewish community in Nis.

In the labyrinthine Roma village, or mahala, 800 to 1,500 people live in brick and concrete houses separated by narrow passageways and irregular courtyards. Laundry hangs from the windows, water drips from open taps and some roofs sport satellite TV dishes. At one end is a stable for horses, and at the fence that separates the village from the open part of the cemetery, sheep and goats peer out at the graves.

Eight years ago, a well-publicized cleanup campaign cleared the cemetery of garbage and waste that had covered the tombstones and eliminated the open sewers that had run amid the graves.

But the campaign’s success proved to be fleeting and now new warehouses, a restaurant and other illegal construction, including a cut-rate department store, intrude on another third of the cemetery, according to Jasna Ciric, the president of the Nis Jewish community, which numbers just 28 people.

There also have been new cases of vandalism, and builders closed off the cemetery with an illegal 12-foot high wall that made access difficult and sometimes impossible, Ciric said.

The builders also prevented the Jewish community from placing a plaque identifying the cemetery and commemorating local Jews wiped out in the Holocaust, she said.

“All the established safeguards of the Jewish cemetery in Nis have remained only on paper,” said Ciric, 56, who has fought for the cemetery’s preservation since the early 1990s.

“I was a fighter, but now I feel empty,” she said. “Our cemetery is being systematically destroyed; all of our longtime efforts and the money invested toward saving it are in vain.”

“The way the cemetery looks today is an embarrassment,” Ruben Fuks, president of the Federation of Serbian Jewish Communities, told Pesic.

Pesic acknowledged the problems and told the delegation that the city wanted to make the site accessible to visitors, place a plaque and live up to its commitment to maintain the cemetery. The site was included recently on a new city map of cultural attractions.

But Pesic offered no concrete solutions.

“Money is the problem,” he said, “not our intentions.”

The cemetery, believed to date from the 18th century, is considered one of the most important Jewish historical sites in Serbia and a reference point for local Jews.

Many older gravestones bear mysterious carvings linked to Jewish mysticism — half-spheres arranged in various patterns; geometric forms, snakes and other symbols that some believe are linked to followers of the 17th-century false messiah Shabbatai Zevi.

Abandoned after World War II, the site was long used as a dump for rubbish and human waste. Vandals over the years broke open graves, scattering bones.

Roma families, meanwhile, built homes among the tombs, creating a ramshackle settlement without proper plumbing, sewage treatment or garbage disposal. Centuries-old tombstones were used as building material, and at least a dozen can be seen protruding from foundations or embedded in paving.

The cemetery grabbed international headlines in 2004 when Jews, Roma and Serbian soldiers joined forces in a massive six-week cleanup operation that cleared more than 100 tons of refuse from the site and installed a sewage system for the Roma settlement.

“I spent 43 days there,” said Ciric, a retired nurse. “It was unbelievable. There were open sewers running amid the tombs, and refuse covered much of the site to a depth of 1.5 meters [nearly 5 feet].”

The operation, spearheaded by the American Jewish Joint Distribution Committee, was hailed as a milestone in civic cooperation. The city guaranteed future maintenance and protection, and in 2007 the cleared cemetery was listed as a national cultural heritage site.

But the momentum to preserve and promote the site soon petered out.

Three months ago, the Federation of Serbian Jewish Communities issued a protest calling the condition of the cemetery “catastrophic.”

Among other things, the illegal new commercial construction had destroyed the sewage treatment system installed in 2004. Today, pipes from inside the Roma village again drain into the cemetery, although there are no open sewers as had existed before 2004.

The issue is further complicated by the Jewish property restitution process.

Only one section has been given back — the section occupied by the Roma village. Ciric said it is such a permanent settlement that there is little possibility that the Roma can be relocated and the site reclaimed.

The Jewish community expects to be restituted the rest of the cemetery, but Ciric said it was unclear what that would mean. She said the owners of the commercial and industrial sites built on this land have made clear that they will refuse to vacate or move.

“When I protested the wall and other construction there, some of these people told me I would never have access to the cemetery,” Ciric said. “They even threatened me. I never go there now alone.”