I bet you thought Israel was home to only camels and street cats. Boy, are you wrong. Here are 10 animals that can be found in the Holy Land, hopefully doing what they are doing in these photos.

1. Hoopoe upset about having a bad feather day 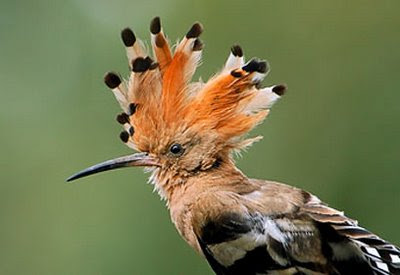 (ynet)
The Hoopoe is known for its crown of feathers (usually more presentable than the one above) and its “hooping” sounds. The Hoopoe was voted Israel’s national bird in 2008. In Hebrew: דוכיפת (Duchifat)

The European Green Toad is very common in Israel and is known for its easy adjustments to climate. In addition, it can change its color in response to heat and light changes. (Just don’t stare directly at it, or you’ll get hypnotized.) In Hebrew: קרפדה ירוקה (Karpada Yeruka)

3. The adorable Sand Cat is taking a bath This adorable fluffy thing is called the Sand Cat, and it is pretty rare in israel, mostly common around the Arava area. When it doesn’t use its fluffy paws to take a little bath, it mostly uses its flat head and sand colors to ambush its prey. In Hebrew: חתול חולות (Chatyl Cholot)

MORE ANIMALS AFTER THE JUMP!!!

4. This camel wants to kiss the Dome of the Rock in Jerusalem

One of the animals that is most identified with Israel, the Arabian single-hump camel, is common to the Negev desert in Israel and owned by many Bedouin tribes. This extremely-photogenic animal stores much of its body fat in its hump and minimizes the heat throughout the rest of its body as a way to deal with the desert heat. In Hebrew: גמל (Gamal)

(yourfunnystuff)
If any of you ever walked around the streets of Tel Aviv late at night and wondered what were those flying things (and I’m not talking about beer bottles), the answer is fruit bats. Yes, there are plenty of bats in Israel, and when they are not too busy hugging a watermelon, they wander from one fruit tree to the other, eating the fruit and spitting the seeds, sometimes helping the seeds to spread and more trees to be planted. In Hebrew: עטלף פירות (Ataleff Peirot)

6. The Arabian Leopard and its extremely sad, googly eyes There is a reason why the sad Arabian Leopard is sad. This beautiful creature is rapidly getting extinct, with fewer than 200 left today. It currently resides in Israel, Jordan, Saudi Arabia and Yemen. The Arabian Leopard was common to the Judean Desert in the 19th century but has seen its numbers decline due to hunting. In Hebrew: נמר המדבר (Namer HaMidbar)

7. A Jerboa guarding a box of meds

This weird mouse-kangaroo thing is the Greater Egyptian Jarboa, a rodent of the awesomely named Dipodidae family. It is common in arid parts of Egypt, Libya, Morocco, Tunisia and Israel’s Negev Desert. It is also considered an endangered species. In the Greek translation of the the Bible, the Jerboa is considered a biblical hare (Deuteronomy 14:7). In Hebrew: ירבוע (Yerboa)

This spiky ball of cuteness can be found mostly in the Galilee area as well as some cities in central Israel. It mostly feeds off bugs and worms and can be found roaming the streets at night, so try not to walk barefoot. In Hebrew: קיפוד (Kipod)

9. A soft shell turtle stepping out of the water for a breather

The sweet-water soft-shell turtles are common to rivers in Israel that lead to the Mediterranean Sea, such as the Yarkon and Alexander. Since the turtles are considered endangered in Israel, the eggs of the turtles are collected by Nature Authority specialists and sent back to the water after they hatch. In Hebrew: צבים רכים (Tzavim Rakim)

10. This Nubian Ibex and its epic facial hair

The Nubian ibex is common to the Negev and Judean deserts. It was mentioned several times in the Bible and also in some cave paintings in southern Israel and Jordan. It is mostly vegetarian, and in the event of danger, the Ibex whistles to grab the attention of its herd. It also grows a pretty awesome beard and thus is the most hipster-ish animal in Israel. In Hebrew: יעל נובי (Yael Nuvi)