In South Florida district, a race with familiar faces — but not Allen West 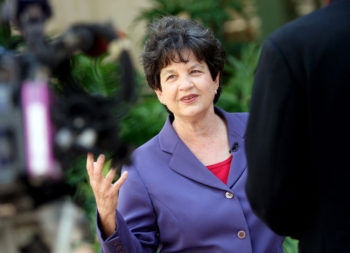 WASHINGTON (JTA) – Democrats and Republicans are readying for a tough fight in Florida’s 22nd Congressional District in coastal Palm Beach and Broward counties — a potential bellwether race that could end up pitting two prominent local Jewish politicians against one another.

Its national import notwithstanding, it’s also a race homey enough that two of its principals lapse after a few minutes into referring to each other by their first names.

“Adam and I are so different in how we should go about tackling challenges,” said Democrat Lois Frankel, referring to likely GOP nominee Adam Hasner.

“I have better solutions than Lois,” Hasner said in a separate interview.

Both have deep roots in local politics. Frankel is a former West Palm Beach mayor and before that served in the Florida House of Representatives, where she rose to the position of minority leader. Hasner’s own tenure in the State Legislature began as Frankel’s was ending, and he eventually rose to majority leader.

But there are reasons for their familiarity: Hasner’s mother, Judy, ran Frankel’s first campaign, for the State Legislature, back in 1986.

For their part, the candidates play down the fact that Frankel, 63, has known Hasner, 42, since he was a Republican teenager needling his Democratic mom over her politics.

“I would just say it’s a small world,” Frankel told The Palm Beach Post when it made the connection in February. “It’s not going to be personal.”

Judy Hasner has said she is backing her son in the race.

Neither, however, is yet their party’s nominees — both must win Aug. 14 primaries, although Hasner’s opponent, a local county commissioner, is not seen as a serious contender. Frankel also is favored to win, Democratic insiders say, although they say her opponent, Kristin Jacobs, a popular Broward County commissioner, could pull off the upset.

“There are 10 different levels of intrigue in this campaign,” said Robert Watson, a professor of American studies at Lynn University in Boca Raton, where the final presidential debate is set to take place in October. “It’s like a made-for-TV movie.”

Indeed, it has already been a dramatic race with a shifting cast of characters. The district is currently represented by first-term Republican Rep. Allen West, a Tea Party favorite and a top target of national Democrats. But decennial redistricting shifted the 22nd in a more Democratic direction, and West shook things up by opting to run instead in a more Republican-friendly district nearby.

A Democratic hopeful, Patrick Murphy, followed West to the new district, briefly leaving Frankel as the last high-profile Democrat standing before Jacobs jumped in. Hasner had been running for the Republican nomination for U.S. Senate until a stronger contender entered the race and Hasner switched his efforts to trying to succeed the departing West.

Democrats see the district as one they must reclaim if they are to demonstrate that the Tea Party conservative insurgency is a spent force. Without making a formal endorsement in the primary, the Democratic Congressional Campaign Committee has seemingly pinned its hopes on Frankel, naming her one of its “majority makers.”

“The party feels it’s a necessary race to win back the House,” said David Harris, the president of the National Jewish Democratic Council.

Republicans view the district as a test of whether they can pitch another conservative — Hasner also has Tea Party ties — as palatable to independents and disgruntled Democrats.

“She’ll get hardcore Democratic supporters,” said Sid Dinerstein, chairman of the Palm Beach County Republican Party. “Adam will get the independents and the Republicans and the Democratic Jews who are no longer Obama supporters.”

The stakes are high for Democrats.

West captured the seat from Democrat incumbent Ron Klein during the Republican surge of 2010, but Florida’s Republican-led Legislature redrew the 22nd to make it more Democratic — apparently in a bid to reinforce neighboring districts with likely Republican voters, Watson said. In 2008, Barack Obama won 52 percent of the old district’s vote; a national Democratic official says he would have received 57 percent in the reconfigured district based on how the precincts voted.

The new map also was seen in some quarters as a rebuke of West, who has made national headlines with often inflammatory statements. He called Rep. Debbie Wasserman Schultz (D-Fla.), the chairwoman of the Democratic National Committee, “vile”; likened Democrats to Nazi propagandists and suggested that as many as 81 congressional Democrats are members of the Communist Party.

Hasner, by contrast, is the affable local boy made good, rising to state House majority leader in his 30s. The new 22nd encompasses 70 percent of his old State Legislature district.

Matthew Brooks, the executive director of the Republican Jewish Coalition, noted another plus for Hasner, who through the years has assiduously networked with the national party leadership through the RJC.

“It’s likely the Congress is going to stay Republican, and to have a Republican congressman there is going to have an impact” for the district, Brooks said. “He’s someone who can get things done, who has a relationship with the leadership.”

Hasner is not compromising on his commitment to conservative fiscal, security and social policies, but he is eager to portray himself as able to win crossover votes. In an interview he noted the endorsement of Clay Shaw, the GOP moderate who represented the district for years.

Hasner said he would stress fiscal policy in his campaigning, pointing out his embrace of the budget proposed by U.S. Rep. Paul Ryan (R-Wisc.), the chairman of the House budget committee, which includes privatizing parts of entitlement programs like Medicare, the government-run medical care program for seniors.

“This isn’t about ideology, this is about math,” Hasner said. “Doing nothing is the path to insolvency.”

Frankel also zeroes in on the Ryan budget.

“The big issue especially for this district is protection of Social Security and Medicare,” she said. “He endorses the Ryan budget, which attempts to voucherize Medicare.”

With an emphasis on the economy and entitlements in a disproportionately elderly district, it remains to be seen what role other issues will play in the race.

Both candidates have visited Israel multiple times and emphasize it as a top foreign policy issue.

Hasner suggested that Frankel’s association with Obama might harm her.

“I believe the foreign policy of the last three years has made America weaker and less respected,” Hasner said.

Frankel touted her endorsement by pro-choice groups such as Planned Parenthood. Hasner, by contrast, has said that he would have voted in Congress to defund Planned Parenthood, and he believes “life begins at conception” — language rarely used by Jewish candidates, although he says he would not oppose abortion in certain cases of rape and incest and to preserve the life of the mother.

Dinerstein suggested that Frankel’s personality could become an issue, saying she earned a reputation for name calling and confrontation when she was West Palm Beach mayor.

“Why do you think she’s facing a real primary challenge?” he said.

Her challenger, Jacobs, asked to distinguish herself from Frankel, said she would “bring a voice of unison” to Washington, pointing to her own work with Republicans and others in improving commuter choices in the district.

“I don’t think it’s going to be about personalities in terms of policies,” she said. “Adam Hasner is even more to the right than Allen West — people will be voting their pocketbook, their values.”

Watson said that Frankel had a reputation as being “tough, at times controversial,” but this also helped lend her credibility — she got things done. Her fundraising of $1.8 million is the best of any Democratic challenger in the country.

Jacobs, whose husband is Jewish, has raised $200,000 in the five weeks since she announced her candidacy.

Both Hasner and Frankel have courted fundraisers nationally and locally. Hasner said he had $700,000 in cash on hand.

Both parties have listed the district as among their 25 must-wins. The Hill, a newspaper tracking congressional races, calls it a “toss-up,” while The Rothenberg Political Report lists it as leaning Democratic.

Brooks said that Hasner was attracting support of Jewish donors not simply because a victory would help preserve the Republican majority, but also in the hopes of getting some Jewish company for Rep. Eric Cantor (R-Va.), the majority leader and the only Jewish Republican on Capitol Hill.

“We’re raising a lot of money for him in our PAC,” he said, referring to the RJC’s separate political action committee. “Leaders are opening their checkbooks for him.”