Chasidic couple overlooking Brooklyn and the Brooklyn Bridge in New York. The Jewish population in the city and three suburban counties has increased largely due to the growth of the Orthodox community. (gaelx via CC)
Advertisement 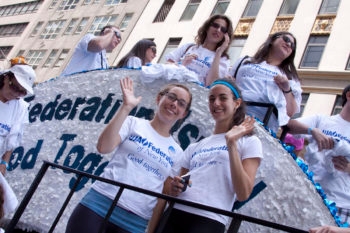 (JTA) — The New York City area’s Jewish population is on the rise again, thanks largely to the growth of Orthodox households.

The number of Jews in the city and three suburban counties jumped to 1.54 million, up from 1.41 million a decade ago, according to a comprehensive population survey released Tuesday by the UJA-Federation of New York.

The Jewish Community Study of New York: 2011 covered New York City’s five boroughs as well as Nassau, Suffolk and Westchester counties. Jewish households represent 16 percent of all households in that region. The survey does not include New Jersey or Connecticut.

In New York City specifically, the Jewish population, which in 2002 was found to have dipped below 1 million, now stands at 1.086 million.

The most dramatic growth in the overall area’s Jewish population came among the Orthodox and those unaffiliated with any denomination. Each group increased by more than 100,000 over the past decade. The numbers of Conservative and Reform Jews each declined by about 40,000.

The number of Jewish children and people under 25 rose from 432,000 in 2002 to 498,000 in 2011. That’s largely a reflection of the growth in the Orthodox community, whose families typically have more children than non-Orthodox families.

Meanwhile, the number of Jews aged 75 and older also increased, rising in the same time frame from 153,000 to 198,000 and mirroring trends in other Jewish communities and the American population at large.

“It serves as a reminder that while we talk about intermarriage, singleness/childlessness among non-Orthodox Jews may actually be a far more important long-term trend,” he said.

On poverty in the Jewish community, about 19 percent of Jewish households are categorized as poor — defined by the survey as having an income under 150 percent of the federal poverty line. The number soars to 43 percent in Chasidic households.

“The government has to be the safety net. The Jewish community has to augment the safety net,” said John Ruskay, the UJA-Federation’s executive vice president. “We will need laser-like interventions.”

The largest Jewish community outside of Israel also is extremely diverse, noted Jack Ukeles, who conducted the 274-page survey with Steven M. Cohen.

Overall, 44 percent of area Jews live in either Orthodox or Russian-speaking households.

Some 216,000 Jews live in Russian-speaking households, while 121,000 Jews are in Israeli households and 50,000 Jews in LGBT (lesbian, gay, bisexual and transgender) households — which Cohen said might be underreported — and 38,000 Jews in Syrian households.

“No other community lives in such diversity in all the areas we have identified,” Ukeles said.

Some 12 percent of Jewish households include a person who is biracial or nonwhite (a category that includes Hispanics). Cohen said that is the highest such percentage nationwide.

The community’s intermarriage rate remains unchanged from the last survey, holding at 22 percent of married couples.

The rate is lower than in many other communities, noted Ira Sheskin, who has conducted numerous Jewish community surveys. By comparison, he said, the intermarriage rate is 28 percent in Philadelphia, 41 percent in Greater Washington, D.C., and 55 percent in the San Francisco Bay Area.

In New York-area intermarried families, 31 percent of children are being raised as Jewish, as compared with 98 percent in families where both parents are Jewish. Those statistics are roughly in line with the 2002 numbers.

Curiously, just 71 percent of children in conversionary families are being raised as Jewish, but the survey’s authors speculate that those children might be from prior marriages or the adults had converted after they began to raise their children.

When it comes to synagogue affiliation, New York Jews are at 44 percent, which is much higher than communities such as Las Vegas (14 percent) but considerably lower than Cincinnati (60 percent).

In a revealing statistic likely to encourage outreach programmers, more than half of the Jews with no religion and more than a quarter of those with another religion still engage Jewishly, for example, attending Jewish cultural events and activities, and participating in holiday celebrations.

That, both Cohen and Ruskay said during a conference call Tuesday, demonstrates that the Jewish community’s outreach efforts are having a positive impact.

The new survey also includes 83,280 households in which people consider themselves partially Jewish. That’s a stark jump from 12,860 nearly a decade earlier. Part of the difference might be attributed to a change in how the question was framed. In 2002, respondents were asked, “Do you consider yourself Jewish or something else?” Depending how they answered, they were listed as “Jewish,” “Jewish and something else” or “not Jewish.”

In 2011, the respondents were specifically asked: “Do you consider yourself, Jewish, partially Jewish or not Jewish?”

Ukeles said he could not definitively confirm whether the statistic’s rise was due to how the question was asked or an actual increase, but he suspects the latter.

“I believe that most of the increase is a function of an increase in the real number of people who consider themselves partially Jewish because the bulge of intermarriage that took place in the 1980s,” he said.

Children of those marriages, he said, are more likely to be in their own households than then they were a decade ago. Members of organizations such as Jews for Jesus were not included in the number, Ukeles told JTA.

The study was conducted by telephone, including by cellphone, Feb. 8-July 10, 2011. Some 5,993 self-identifying Jewish adults were interviewed. The poll’s margin of error is plus or minus 2 percent.