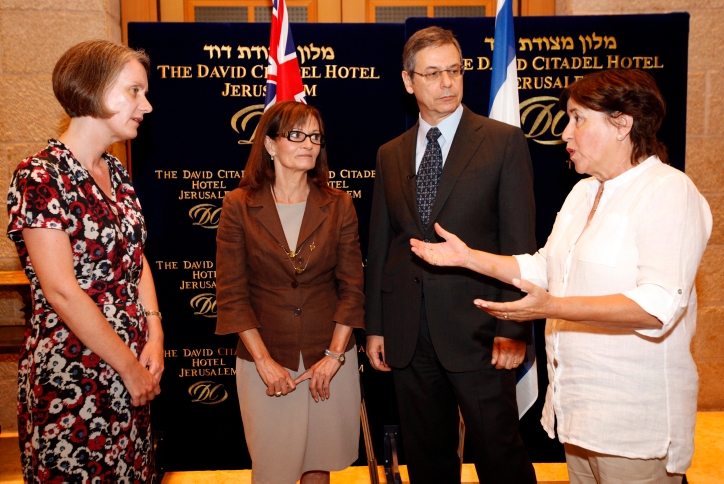 IOC President Jacques Rogge, shown meeting with Israeli President Shimon Peres in October 2010, told the audience at a memorial for the Israelis slain at the Munich Olympics in 1972 that the attack â€œwas a direct assault on the core values of the Olympic movement.â€ (Mark Neyman/GPO/FLASH90)

Hundreds commemorating the 40th anniversary of the terrorist attack at the 1972 Munich Olympic Games during a memorial ceremony at Guildhall in London, Aug. 6, 2012. (Israeli Embassy in the UK)

LONDON (JTA) — The president of the International Olympic Committee came under attack from successive speakers at a London memorial for the Munich 11.

Jacques Rogge, who was in the audience on Monday night, was blamed for refusing to allow a minute of silence during the opening ceremony of the London Games in memory of the 11 Israeli athletes and coaches who were slain by Palestinian terrorists at the 1972 Olympics. A petition started by the families of the victims and JCC Rockland in suburban New York generated more than 111,000 signatures from across the world, but failed to move the IOC. President Obama and international lawmakers also backed the minute-of-silence effort.

“Shame on you, IOC,” said Ankie Spitzer, widow of fencing coach Andre Spitzer, who died in the attack. “You have forsaken the 11 members of your Olympic family. You discriminate against them only because they are Israelis and Jews.”

Another of the widows, Ilana Romano, told Rogge that he had “submitted to terrorism.”

“You will be written down on the pages of history as … a president who violated the Olympic charter calls for brotherhood, friendship and peace,” she said at the Guildhall, a medieval-style great hall in central London.

The Israeli Embassy in London and the National Olympic Committee of Israel organized the memorial along with the local London Jewish community.

Members of the 2012 Israeli Olympic delegation sat on stage for the ceremonies, which were attended by more than 650 people, including representatives of  various national Olympic committees. Among the many government officials in the audience were British Deputy Prime Minister Nick Clegg, opposition leader Ed Miliband, London Mayor Boris Johnson and Israeli Sports and Culture Minister Limor Livnat.

Rogge, accompanied by the only Israeli representative on the IOC, Alex Gilady, told the audience that remembering the events of 1972 was “painful” and that he “would never forget why we’re here.”

Pointedly avoiding referring to the Munich minute of silence campaign, Rogge — a member of the Belgian yachting team at the 1972 Olympics — condemned terror and said the Munich attack “cast terrorism’s dark shadow on the Olympic Games. It was a direct assault on the core values of the Olympic movement.”

Rogge’s speech was greeted by polite applause from the audience.

After the ceremony, some audience members privately expressed discomfort at the sustained attack on Rogge.

However, the audience mostly applauded the attacks on Rogge.

Livnat said that those asking for a minute of silence were in tune with the Olympic spirit. Mick Davis, who as chairman of the Jewish Leadership Council and of the United Jewish Israel Appeal is the most senior lay leader of the British Jewish community, told Rogge that “to be silent is to be complicit … to fail to remember is to be complicit.”

Vivian Wineman, president of the Board of Deputies of British Jews, Anglo-Jewry’s main representative organization, told JTA that “it is good that [Rogge] should see how we feel.”

Following the ceremony, Spitzer said she truly believed that Rogge would allow the minute of silence to go ahead this year, which is why she came to London to meet him before the Games began. She told JTA that she is an optimist by nature and believes a minute of silence will happen one day.

British Prime Minister David Cameron spoke at a reception before the ceremony officially began, and then left. The American ambassador to the United Kingdom, Louis Susman, read a message from President Obama.

Israeli actor Chaim Topol served as the master of ceremonies.