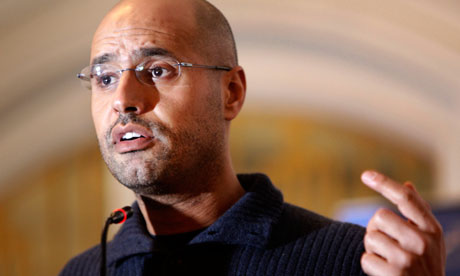 On Monday, Weinerman posted on her Facebook page in Hebrew,  “for a long time I have had trouble falling asleep at night, revealing my anxiety among good friends and between the living room walls. But now, with injustice displayed proudly on the world stage, I call for you to lend me a hand and prevent another victim of hatred, prejudice and moral corruption. Orly.” Weinerman also attached a report by The Daily Mail, a British tabloid, which quoted Weinerman, 41, as saying that Blair — a former British prime minister and now envoy of the Middle East Quartet diplomatic grouping — was an “old friend” of Saif al-Islam, the son of the late ruler of Libya, Muammar Gaddafi.

Saif al-Islam Gaddafi is facing the death penalty in Libya, where he is on trial for his role in the killing of protesters during last year’s uprising against his father.

Weinerman “dated” Saif al-Islam for six year, after meeting him in London in 2005, the tabloid reported.

The paper quotes her as saying that “Saif worked closely with Mr. Blair before he was captured. The two are old friends.”

The Daily Mail added that the Israeli actress said her “discreet relationship” with Saif al-Islam, whose name means “sword of Islam,” began in April 2005 when they were introduced by mutual friends.

Weinerman’s parents were opposed to her converting to Islam, she said.

“The fact that Saif was prepared to involve himself in a loving relationship with a Jew is a measure of how open and civilized he is,” she told the tabloid. “He judged people for what they are, not what people perceive them to be. Saif never made an issue of my religion or the country I came from.”

Weinerman previously had denied having any contact with Saif after publications including Germany’s Der Spiegel reported their romance in 2006.