Bibi draws a bomb at the UNGA, the internet explodes

Say what you want about Israeli Prime Minister Benjamin Netanyahu, but the man is a self-made Internet sensation.

Whether it’s comments about ducks, holiday greetings with cats and parrots, dark Time Magazine covers or epic photobombing, Bibi can generate serious Internet buzz. Today the world was looking to see what Netanyahu would present at his speech at the annual United Nations General Assembly, and boy, he did not disappoint.

When talking about Iran and the famous “red line,” or point of no return, Bibi took a sketch of an ACME bomb and actually drew a red line. That was enough to make the Israeli meme nation very happy and very busy.

Here are the results, starting with some Looney Tunes and Wile E. Coyote references:

“And that’s how I killed the road runner” 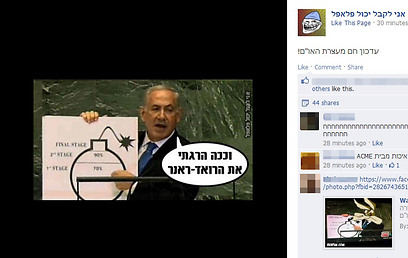 And the unfortunate ending:

To Bibi, Seattle Seahawks WR Golden Tate’s touchdown against the Packers was also a red line:

“After this line, the ‘Death Star’ will be fully operational”

Here are some quite harsh ones:

Apparently the Iranians are comparing Bibi to a donkey from a children’s television show:

And here he talks about what really matters:

“Around here, there no more potato chips, it’s just air”

So until the next GA…