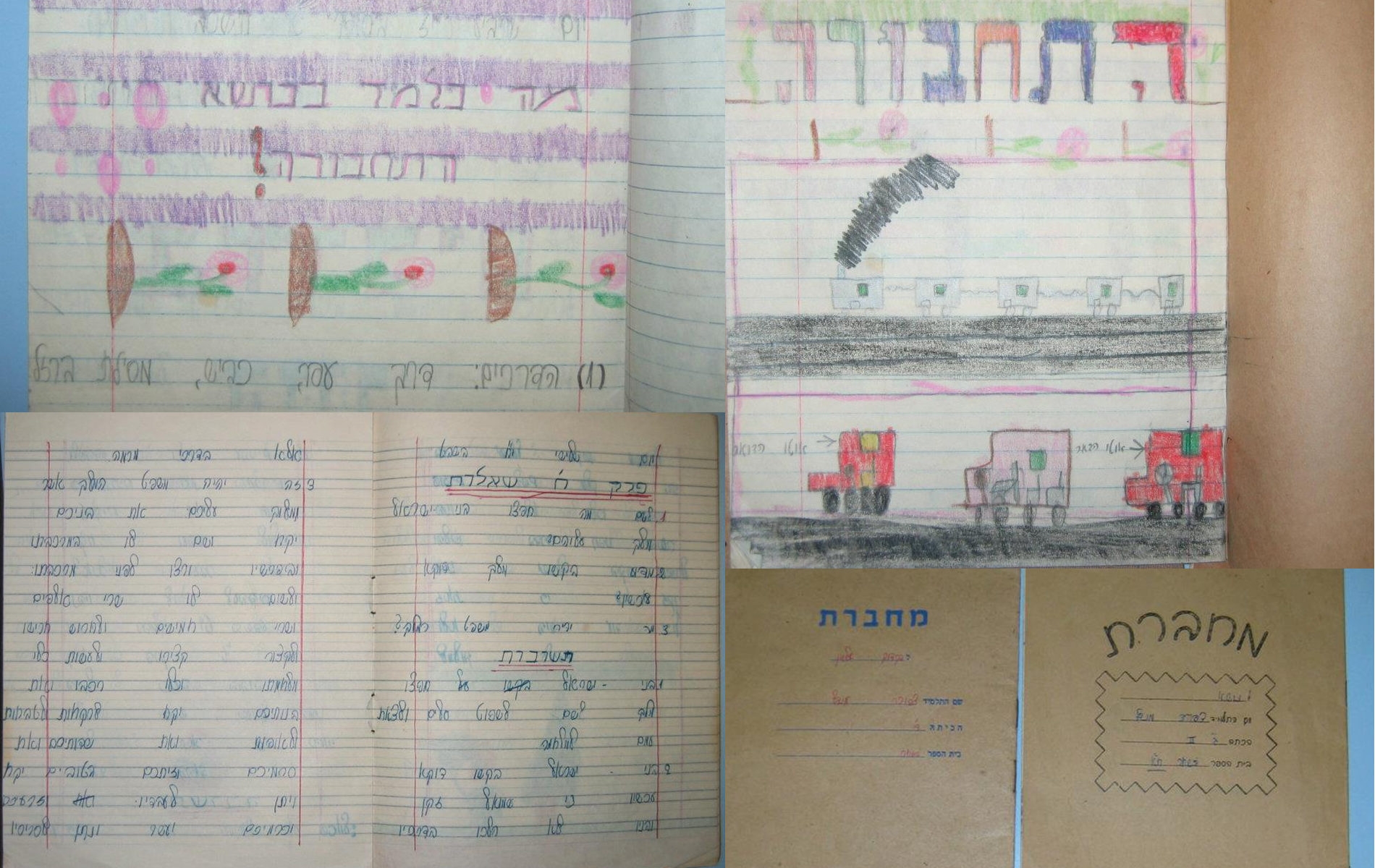 BALTIMORE (JTA) — Four plain, brown notebooks among an array of colorful cards, games and pictures began Penny Barsimantov’s quest into the past.

The researcher for a nonprofit organization in Tel Aviv is passionate about music, which is how one day last year she stumbled upon some half-century-old notebooks that led her down yet a different type of search for information.

Barsimantov stepped for the first time into the Israeli studio of Hagi Marom, a product designer with whom she is collaborating on a book about Israeli cassettes and their historical role in the country’s music scene. The studio in Ramat Gan doubles as Marom’s personal museum of Israeli pop culture and is full of tables and bookshelves displaying his vibrant collection of trading cards, pictures, postcards and board games.

The many items drew Barsimantov’s interest, but none so much as the notebooks. They dated back to 1963 and had belonged to Tzipora Mandel, a third-grader at the Hashachar School near downtown Tel Aviv’s popular Carmel Market. Barsimantov flipped through the notebooks, enjoying in particular the girl’s colorful crayon and pencil pictures of trains and trucks that accompanied notes from classes covering transportation.

“I said, ‘Wow, such nice notebooks with drawings.’ I could see that this was a girl who was organized, who saw the life of old Tel Aviv,” Barsimantov, 38, remarked last week. “It did something to my heart. I became interested in who this girl is. I wanted her children to see these notebooks.”

Marom had bought the notebooks at a flea market, but Barsimantov knew that she must find their owner and return the items. With Marom’s permission, she set forth.

The school itself was a dead end, having closed in 1965. Barsimantov searched in vain for Mandel in the telephone directory and posted pictures of the notebooks on Facebook and Twitter. Listeners to her interview in July on the Israeli radio program “Hamador L’chipus Krovim” (Searching for Relatives Bureau) called with tips. One person was sure that Mandel had subsequently moved to Belgium — a fact confirmed when Barsimantov spoke with Mandel’s brother.

She was a different Tzipora Mandel, though.

“I was back to square one,” Barsimantov said.

Barsimantov then visited Tel Aviv’s municipal archives and found information on the Hashachar School — dry numbers on account ledgers, but nothing about the people who had populated the building. Barsimantov prepared to leave the archives when she noticed an envelope in the folder. She opened the envelope, which contained a folded paper. Barsimantov unfolded the paper and read the names of Hashachar’s students, including the Tzipora Mandel whom she sought.

“It was like a Hollywood film,” Barsimantov said. “I said to myself, ‘Finally, after a year, I found her!’ ”

She called back one of the radio listeners, a helpful gentleman who had given a tip that had aided her pursuit. This time he suggested that Barsimantov seek Mandel by utilizing the diminutive Tzipi rather than Tzipora. Barsimantov took to Facebook to do just that. A friend of this Tzipi Mandel soon contacted Barsimantov.

“That’s her,” the friend said.

“I heard that you’re looking for me,” the now Tzipi Silice said.

On Aug. 20, Barsimantov and Silice met at Cocoa Cafe, a coffee shop in north Tel Aviv. Silice is a 59-year-old widow with a teenage son, Eyal. As Tzipora Mandel, she had attended the Hashachar School. Her parents, Moshe and Sarah, had lost their first families in the Holocaust. They met and married in Israel; Tzipora was their only child.

Barsimantov showed Silice a printout of the many email exchanges related to her search for the long-ago pupil. She presented the notebooks, asking if she and Marom could hold onto them just a little longer so they could scan them as a keepsake of the era.

Silice readily agreed. After all, she’d completely forgotten about the notebooks. She did, however, recall having placed them in a suitcase with magazine pictures of American movie stars, paper napkins from restaurants and wrappers from chewing gum — one having “a taste of cinnamon,” she told JTA. The suitcase must have been lost when the Mandels moved apartments, Silice explained.

She also said she had fond memories of her “very nice and small school,” which went up to fifth grade.

“I remember the principal, Michael Gilboa, and a Yemenite janitor named Saadiah, who rang the bell at recess,” Silice said. “I remember a play we presented about King Solomon and Bathsheba. That was in fourth grade, I think, because my father was still alive. He died the week that President Kennedy was killed.”

The story could end there, with the women exchanging hugs and returning to their respective jobs, and Silice awaiting the notebooks she hopes to show her future grandchildren. But Silice had brought Barsimantov a publication from her office that publishes a home-design magazine; it helped the women glue together additional pieces of their puzzle. Silice actually recognized Barsimantov, who lives in an apartment that belongs to Silice’s boss. A few years ago, Barsimantov had come to the office to deliver something to her landlord.

Now, sitting in the coffee shop, Silice said she “had a feeling that I’d met her somewhere” before.

The women’s connection crisscrossed another way, too. Silice loves the Yiddish language and theater, and had wanted to contact the woman who chairs the National Authority for Yiddish Culture.

“It is very strange. I believe that things don’t happen just like that,” Silice said. “She didn’t randomly find me. Reality trumps the imagination.”