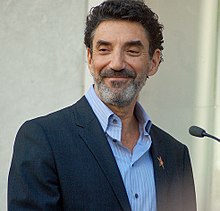 Television producer Chuck Lorre, the man who is behind successful shows like “Two and a Half Man,” “Big Bang Theory,” and “Dharma and Greg,” and also the target of Charlie Sheen’s alleged anti-Semitic rant, is now in the center of a political-turned-entertainment controversy.

The reason – his famous “Vanity Cards,” (that’s showbiz speak for the screenshots at the end of the closing credits). Lorre is known for using his card to express everything that’s on his mind, or at least what the CBS censor allows him to get through. Once I watched an episode of his show “Mike and Molly” when I was on a plane going to Israel, and his vanity card was about his writing his thoughts when he was on his way to Israel — I definitely felt a connection there.

However, the people who definitely aren’t feeling the same connection were the producer of the ABC show “The Bachelor/Bachelorette.” The reason – Lorre mocked them in his would-be vanity card supporting President Obama.

Well, the card that followed Thursday’s “The Big Bang Theory,” card no. 397c, was titled “Censored by Me”:

Indeed, the uncensored version was waiting for the audience in Lorre’s site. Since it is, in fact, really uncensored, you can read it here.

One of Lorre’s provocative questions touched on the topic of gay marriage,

“What does it say about us when we think the institution of marriage is threatened by gay people who love each other, but not by idiotic game shows like The Bachelor?”

That reference infuriated “The Bachelor” producer Elan Gale, who tweeted:

Robert Mills, a co-producer of “The Bachelor,” added a personal tweet:

So far Lorre hasn’t responded, but if this ends up being anything like the feud he had with Charlie Sheen, this is going to be fun.