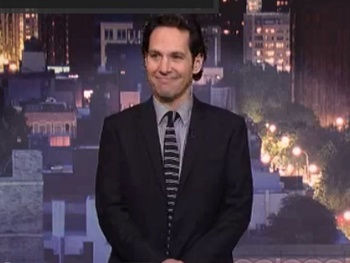 Paul Rudd’s new Broadway show “Grace” received a pretty disgusting feedback during last week’s performance, when an audience member sitting at the balcony threw up on the orchestra theatergoers.

The audience member, reportedly drunk, “fell forward so that he was leaning/hanging over the balcony,” audience member Gabe Alfassy told New York magazine. “As people were trying to get him back up and into his seat, he threw up all over the people below him in the orchestra and then collapsed on the floor of the balcony. A group of about 20 formed around where he was, and everyone in the theater was looking back at the commotion.”

But on Tuesday night’s edition of the famous Top 10 segment of David Letterman’s “Late Show,” Rudd shared his experience: