Jon Stewart is 50! Let’s celebrate with his best moments 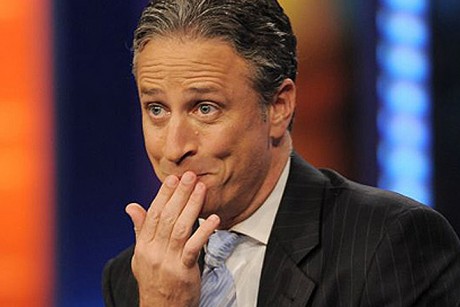 Fifty years ago today, in the great city of New York, Jonathan Stuart Leibowitz was born.

Later, his family moved to New Jersey and Jonathan switched the spelling of his name to Jon Stewart, and moved from studying chemistry in The College of William & Mary to pursuing a career in comedy. As we celebrate the golden jubilee of the man behind “The Daily Show,” we look at the best moments of his career, and believe it or not, there were many of them before he took over the desk in the Midtown Manhattan studios.

The famous comedy venue “Caroline’s” had its own show on A&E, and Stewart was one of the show’s writers. You can even see him (not hear him though) in this sketch from 1990, as Colin Quinn and his mullet are trying to figure out who wrote a certain sketch (also in that sketch, a very young Louis C.K.).

Stewart’s first full television hosting gig was for MTV’s “You Wrote it, You Watch it.”

The show featured humorous reactions to letters sent to MTV offices by viewers, but barely lasted one season. That show’s camera movement is probably the karma reason for why MTV is so terrible now.

A year after, MTV introduced “The Jon Stewart Show”

The ridiculously 90s talk show was at one point the second highest-rated program on MTV, behind “Beavis and Butt-Head,” of course.

In 1995, Stewart turned to the big screen, and produced this unforgettable stoner cinema moment from “Half Baked.”

His title was the “enhancement smoker,” and no one has ever looked at a $20 bill the same since.

He was also Adam Sandler’s roommate in “Big Daddy”

Back to television, Stewart’s first appearance on “The Daily Show” was as a guest

The year was 1996 and the host was Craig Cilborn, but it was pretty obvious who’s running the show.

In 1998, Stewart had a recurring role on “The Larry Sanders Show”

His role was, surprise surprise, the person who is set to take over the fake talk-show

In 1999, Stewart finally became the host of “The Daily Show”

Stewart introduced many great correspondents like Steve Carrell and Stephen Colbert, who gave us hints of his future “Report” in this video from the 2000 election night

Like other talk show hosts, Stewart couldn’t hold back his tears. In addition, he offer up one of the most emotional quotes, “The view… from my apartment… was the World Trade Center… and now it’s gone, and they attacked it. This symbol of American ingenuity, and strength, and labor, and imagination and commerce, and it is gone. But you know what the view is now? The Statue of Liberty. The view from the South of Manhattan is now the Statue of Liberty. You can’t beat that.”

Stewart is known to criticize the news media on his show, one of his biggest targets is conservative news network FOX News

Here he is laughing at Glenn Beck in this hilarious skit featuring a rebellious blackboard.

Reminder: Sanchez was forced to resign after saying “everybody who runs CNN is a lot like Stewart”

And also plenty of references to Israel and the Palestinians, like “Dr. Bagelman’s Hour of Hate”!!!!

Stewart also hosted the “Rally to Restore Sanity and/or Fear” in Washington, D.C. with Stephen Colbert in 2010

And right before the 2008 elections, he participated in a debate with arch rival Bill O’Reilly of FOX News

Stewart, who is significantly shorter than O’Reilly, used an electronic stool to keep up with O’Reilly’s height

And since 2003, Stewart’s “The Daily Show” won the Emmy for Outstanding Variety, Music or Comedy Series every single year

Overall, the show has taken home 18 Emmy awards. Here is Stewart’s acceptance speech from this year. Notice his interaction with Stephen Colbert and Jimmy Fallon.

So the first 50 years of Jon Stewart have been very productive, insightful and, most importantly, hilarious. Here’s to 50 more!