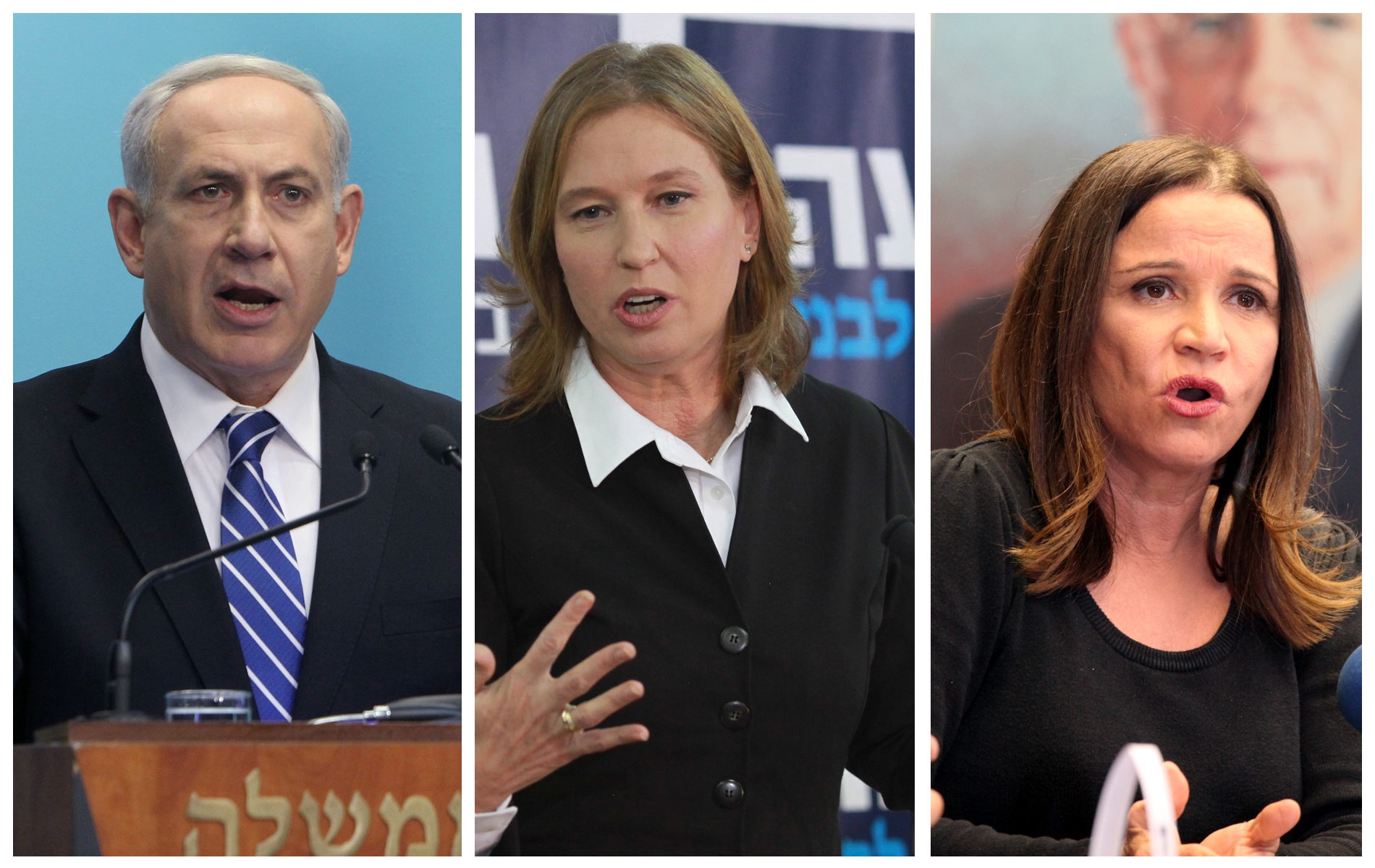 TEL AVIV (JTA) – Two months ago, the strategy for victory was clear: To unseat Benjamin Netanyahu in elections on Jan. 22, Israel’s handful of center-left parties had to unite under one banner and choose a leader who could challenge the Israeli prime minister on issues of diplomacy and security.

Instead, the opposite has happened. Netanyahu’s opponents have become more fragmented, and the center-left has focused more on social issues than security.

The Knesset’s largest party, Kadima — founded in 2005 by Ariel Sharon as a centrist breakaway from Likud, and later led by Tzipi Livni — appears to be collapsing. Members have rejoined Likud, defected to Labor or are joining Livni’s new centrist party, called the Movement. Some polls are saying that Kadima may not even make it into the next Knesset.

Shelly Yachimovich, who heads Labor — historically one of Israel’s two biggest parties but the fifth largest in the current Knesset — has made socioeconomic issues her focus.

The emphasis on socioeconomic policy represents “a reshuffling of the system far from the dominance of security issues,” says Tamar Hermann, senior fellow at the Israel Democracy Institute.

But ceding the debate over security policy to Netanyahu, who has more security experience than Yachimovich, a former journalist, clearly gives the prime minister the upper hand.

Meanwhile, the right wing has consolidated, virtually assuring a third term for Netanyahu. Recent polls show the prime minister’s ruling Likud Party, which has merged lists with the nationalist Yisrael Beiteinu party, winning 38 of the Knesset’s 120 seats. Labor, polling in second place, might not break 20.

Netanyahu’s poll numbers have fallen since the end of Operation Pillar of Defense in Gaza last month. Some analysts say right-wing Israelis are unhappy that the prime minister agreed to a cease-fire rather than pressing ahead with a ground operation. But with Netanyahu still controlling a daunting lead, center-left parties are scrambling to find a strategy that gives them a shot at winning the premiership.

Yachimovich’s focus on social issues, including calls for lower prices and more social welfare, represents an effort to harness the energy of the mass social protests Israel saw in the summer of 2011, when hundreds of thousands took to the streets to agitate for more help for the middle class. But Labor thus far has failed to reignite the spark that propelled the protests.

With the Israeli left in shambles — less than 10 percent of Jewish Israelis identify with left-wing ideology, polls show — Labor has pivoted to the center, trying to rebrand itself from a left-wing party to a centrist one.

“The Labor Party is located and has always been located in the center of the political map,” Yachimovich told Army Radio on Nov. 25. “Its strength is from its pragmatism, its Zionism, its very pragmatic struggle for peace and especially from Labor’s being a social democratic party.”

Yossi Klein Halevi, a senior fellow at the Shalom Hartman Institute, said, “Labor finally figured out that the only way it has a chance for a comeback is if it distances itself from Oslo,” the 1993 Israeli-Palestinian peace accords. Labor under Yitzhak Rabin engineered that peace accord, which many Israelis now view as having failed.

“We’re seeing a revision of the left,” Halevi told JTA. “The mainstream left is trying to return to the mainstream” of Israeli society.

But the center is already crowded with other Israeli political parties all competing for the same votes. Yesh Atid, a new party led by former journalist Yair Lapid, has generated excitement by calling for a lower cost of living and universal military service. Livni’s new party is stressing the importance of reaching an Israeli-Palestinian settlement that would result in partition and a Palestinian state — not for the Palestinians’ benefit or out of some idealistic vision of coexistence, but as a pragmatic necessity to secure Israel’s democratic future.

Not everyone believes the fragmentation of the center is bad for the centrists’ cause.

“What’s important is the size of the bloc, not the party,” says Hebrew University political science professor Gideon Rahat. “Every party will try to emphasize a different aspect of policy. It’ll be the same, as if they were united.”

In her speech announcing her return to politics, Livni said the Movement aims to take votes from Likud and “provide an answer for people who have no one to vote for.” (Livni had quit after losing an election in March for Kadima’s chairmanship to Shaul Mofaz.)

Livni’s decision is likely to deal the biggest blow to Kadima, once the flag-bearer of the political center in Israel and, from its founding in 2005 until 2009, the party of the prime minister — first Sharon, then Ehud Olmert.

On Thursday, former Labor leader Amir Peretz said he was joining Livni’s party. Peretz, who served as defense minister under Olmert, had been a subject of much derision for his disastrous performance during the 2006 war with Hezbollah, when at one point he was photographed observing the fighting through binoculars that had the lens cap on. But Peretz’s reputation was revived in recent weeks as a result of the success of the Iron Dome missile defense system during the mini-war in Gaza; Peretz had been the main champion of Iron Dome and overcame military resistance to its development.

While Netanyahu watches the centrist infighting from a distance, his Likud has shifted further to the right. In last month’s party primaries, several hawkish settler advocates captured top spots, including Moshe Feiglin, leader of the Jewish Leadership faction of the party. Occupying spot No. 15 on the Likud list, Feiglin advocates for annexing the West Bank and wants to encourage Israeli Arabs to leave the Jewish state. Some moderate Netanyahu allies, by contrast, won’t get another term in the Knesset.

Hermann says it’s still too early to predict a winner based on how the polls fluctuate in Israel.

“There are new issues at play, so three, four or five seats can change the picture,” she said. In polls, “a few Knesset seats is within the margin of error. You can’t build a theory on it.”