Jewish films coming soon to a screening near you A scene from "Aliyah," directed by Elie Wajeman, which follows a Jewish drug dealer living in Paris who dreams of a better life in Israel. (Courtesy Aliyah)
Advertisement 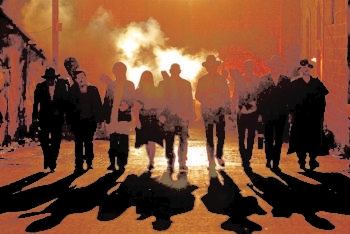 NEW YORK (JTA) — The New York Jewish Film Festival closed this week after showcasing 37 films from around the world. Here are a few films to look out for as they travel to other American cities in the coming months.

Set in the grungy streets of Paris, “Aliyah” offers a glimpse into the raw and dark life of Alex, a 27-year-old Jewish drug dealer from a broken home who must constantly pay off the debts of his abusive older brother, Isaac.

Presented with the opportunity to move to Israel with his cousin and open a restaurant in Tel Aviv, a withdrawn and endearingly wounded Alex faces the challenge of breaking free from his destructive brother and sorting out his complicated love life.

Dreaming of a better life in a land he’s never known, Alex looks to the streets for some fast cash but finds that love and betrayal are just the beginning of what obtruct his path to the Holy Land.

Alex’s attempts to escape the disorder of his Paris life are portrayed convincingly by French director Elie Wajeman. The film’s enticing storyline, spoken in French with English subtitles, was a favorite at the 2012 Cannes Film Festival and the Philadelphia International Film Festival.

“Aliyah” is scheduled to screen at film festivals in Atlanta, Miami, Toronto, Cleveland and Chicago.

In a film Illustrating prestate Israel’s growing pains during World War II, Dina Zvi-Riklis beautifully portrays the tragic world of 13-year-old Maya, an orphan abandoned by her parents and left to fend for herself in a Tel Aviv orphanage.

As Maya faces frequent bullying in her attempts to adapt and fit in, she befriends the orphanage head, Dr. Markowski, an old friend who knows her parents and tries to get them to take Maya home.

The production team did extensive research to accurately portray Israel of the 1940s, and the film boasts beautiful cinematography that enhances its subplots such as the pressures of life under the British Mandate and the smuggling of weapons in the fight for independence. The film is based on a book by Rachel Eytan that Zvi-Riklis read as a teenager and decided the storyline was important to preserve.

“The adults and the kids are kind of orphans waiting for the end of the Second World War, which will deliver salvation, waiting that someone would save them from their loneliness but ironically comes a new war,” Zvi-Riklis wrote in an email. “What interested me is to tell the story from the perspective of women. Usually we see this period through the male heroic perspective. I wanted to confront the emotional side and femininity.”

“The Fifth Heaven” is scheduled to screen at festivals in Baltimore, Boca Raton, Fla., and Middletown, Conn.

Few films put a human face on society’s worst jobs quite like Idan Hubel’s “The Cutoff Man.” The film revolves around Gaby, a father of two living in northern Israel who faces unemployment. He is forced to make a living off the hardship of others, cutting off the water supply of those who don’t pay their bills.

Driven to put food on the table and fulfill his son’s dream of becoming a professional soccer player, Gaby is subjected to sleepless nights, physical and verbal assault, humiliation and gut-wrenching sorrow. He struggles to maintain his dignity while following corporate instructions to punish the impoverished.

The film is dry and slow, unapologetically forcing the audience to stomach Gaby’s harrowing assignments, which earn him nothing but a few shekels for each water pipe he closes.

Hubel, whose father worked as a cutoff man for 14 years, has no problem leaving minute-long moments of silence to emphasize the agony of the situation. And Gaby, played by the celebrated Israeli actor Moshe Igvy, barely speaks in the film as he drags himself miles and miles to close a few more water pipes to pay his bills.

“The Ballad of Weeping Springtime”
Directed by Beni Torati (Israel)

Produced like an old American Western but spoken in Hebrew, “The Ballad of Weeping Springtime” is an adorable tale of a musician who fulfills the wish of his dying best friend to perform a song they wrote together many years earlier.

The protagonist, Yosef, once played lute with a legendary Mizrahi band, The Turquoise Ensemble, but retreated to northern Israel and opened a bar after being sent to prison for a fatal car accident. When Amram, the son of his former bandmate, comes with news that his father’s dying wish is to hear his arrangement of “The Weeping Springtime Symphony” performed, Yosef embarks on a peculiar journey to organize the perfect band.

“The Ballad of Weeping Springtime” is scheduled to screen domestically at festivals in Atlanta, Michigan, Miami, Santa Barbara, Calif., and Austin, Texas, as well as internationally in Montreal, Toronto and Paris.

“All In”
Directed by Daniel Burman (Argentina)

An amusing romantic comedy from Argentinian director Daniel Burman, “All In” is the story of Uriel, a hotshot professional gambler who has lots of luck with cards and ladies but keeps a poker face with everyone else in his life, including his two children.

Newly divorced and eager to explore his reclaimed bachelorhood, Uriel decides on a whim to have a vasectomy. He then accidentally rekindles a relationship with an old flame. Facing middle age, Uriel, played by the Oscar-winning actor Jorge Drexler, must face down his web of lies and cut himself free of gambling.

The film has some quirks — Uriel confiding in his urologist like he’s a shrink; the reenactment of a vasectomy with a cookie; and the concert performance with a Chasidic rock band called the Rabbi-ing Stones. Still, Burman manages to extract from this mess the uplifting notion that true love is available to anyone, no matter how puerile.

“All In” is scheduled to screen at festivals in Pleasantville, N.Y., Hartford, Conn., Toronto and Houston.