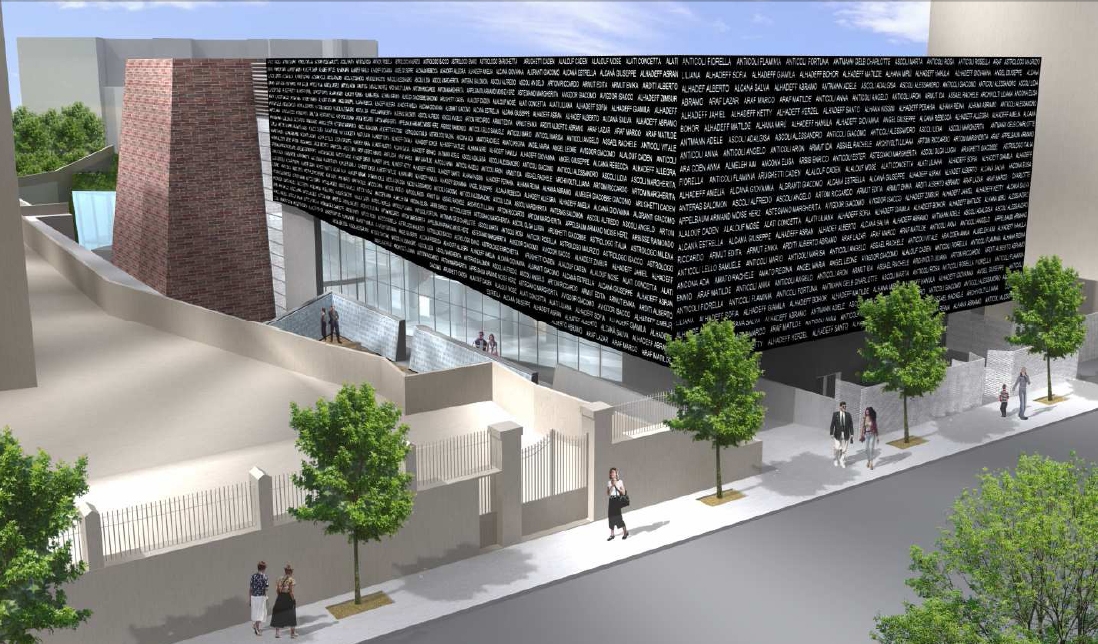 ROME (JTA) — If all goes according to plan, a starkly modern, $30 million Holocaust museum will soon rise on the site of fascist dictator Benito Mussolini’s Rome residence.

The site, also the location of ancient Jewish catacombs and now a city park, will be home to a museum first proposed in 2005 but held up repeatedly by financial and bureaucratic problems.

“I hope construction begins this summer,” Leone Paserman, the president of the Museum of the Shoah Foundation, told JTA. “Of course in Italy, it is always hard to say.”

The facility will be the first Holocaust museum in Italy, which despite its wartime alliance with Nazi Germany has a somewhat mixed Holocaust record. The country adopted fiercely anti-Semitic legislation in 1938, barring Jews from schools, dismissing them from public positions and outlawing intermarriage, among other restrictions.

At the same time, the Italian military generally declined to take part in the murder or deportation of the country’s Jews, and territories occupied by Italian forces were considered relatively safe. The first deportations to death camps came only after Nazi Germany occupied parts of Italy in 1943 following the surrender of the fascist government to allied forces.

“There are delicate situations in Rome, including the role of Pope Pius XII and also prewar anti-Semitism,” Paserman said. “But we have to remember that thousands of Jews in Italy were saved in convents” and other Catholic institutions.

Rome’s City Council approved final plans for the museum a year ago, but city funding was later blocked by government-imposed financial restrictions on municipal spending. The funds were freed up in December.

Rome Mayor Gianni Alemanno said that the final bureaucratic approval from local authorities was expected by the end of January. The city is expected to issue an international tender to construction firms and award a contract in the spring.

“It will be very important to inaugurate this museum while there are still some survivors alive,” Alemanno said.

The new museum will be built on the grounds of Villa Torlonia, an elegant 19th century mansion that Mussolini used as his residence from 1925 to 1943. Jewish catacombs dating back to ancient times were discovered by chance beneath the surface of its extensive gardens in 1919.

“It is surely one of the ironies of history that for nearly two decades Mussolini resided on top of a catacomb complex constructed by those whose descendants — being the main victims of his racial policies — were the ones he forcefully tried to eliminate from the very fabric of Italian society,” Leonard Rutgers, a Dutch expert on the catacombs, told JTA.

The museum, which will cover 25,000 square feet, was designed by the architects Luca Zevi and Giorgio Tamburini. Zevi, whose mother, Tullia, served for years as head of the Italian Jewish community, has described the design as a “black box” — a huge flattened cube that will bear the names of Italian Holocaust victims. Inside will be a permanent exhibit as well as an archive, library, conference hall and facilities for research and education.

Plans for the museum’s exhibition and research facilities are being overseen by a committee headed by Marcello Pezzetti, one of Italy’s leading Holocaust scholars and educators, who will also serve as the museum director. Pezzetti has said he wants the museum to “insert the Holocaust in the Italian context into the Holocaust in the European context: By the time that the first Italian Jews were deported from Rome in October 1943, three-quarters of East European Jews had already been killed.”

Among the main focus areas, Paserman has said, will be a confrontation with Italy’s “uneasy” history as a fascist ally of Nazi Germany at the onset of World War II, as well as the ambiguous role of the Catholic Church before and during the Shoah.

“Almost 70 years have passed since the Shoah, and the survivors — the witnesses — are passing away,” Paserman said. “After 70 years, we are passing from memory to history, and this museum will be a place to learn history, to train teachers, to educate new generations.”

Holocaust education is already a fixture of the Italian school system, with classes and courses as well as special events marking International Holocaust Memorial Day, Jan. 27. Each year, hundreds of Italian students are taken to Auschwitz on educational trips.

Even with no further delays, Paserman told JTA, the new museum will still not open until 2016 or 2017. Construction alone, he said, would take more than two years. Further complicating matters is the fact that while the city is footing the $30 million bill for the museum’s construction, funds still must be found for the exhibition.

“We are all hit by the financial crisis,” Paserman said. “But there is great will to get the museum built on the part of the authorities.”