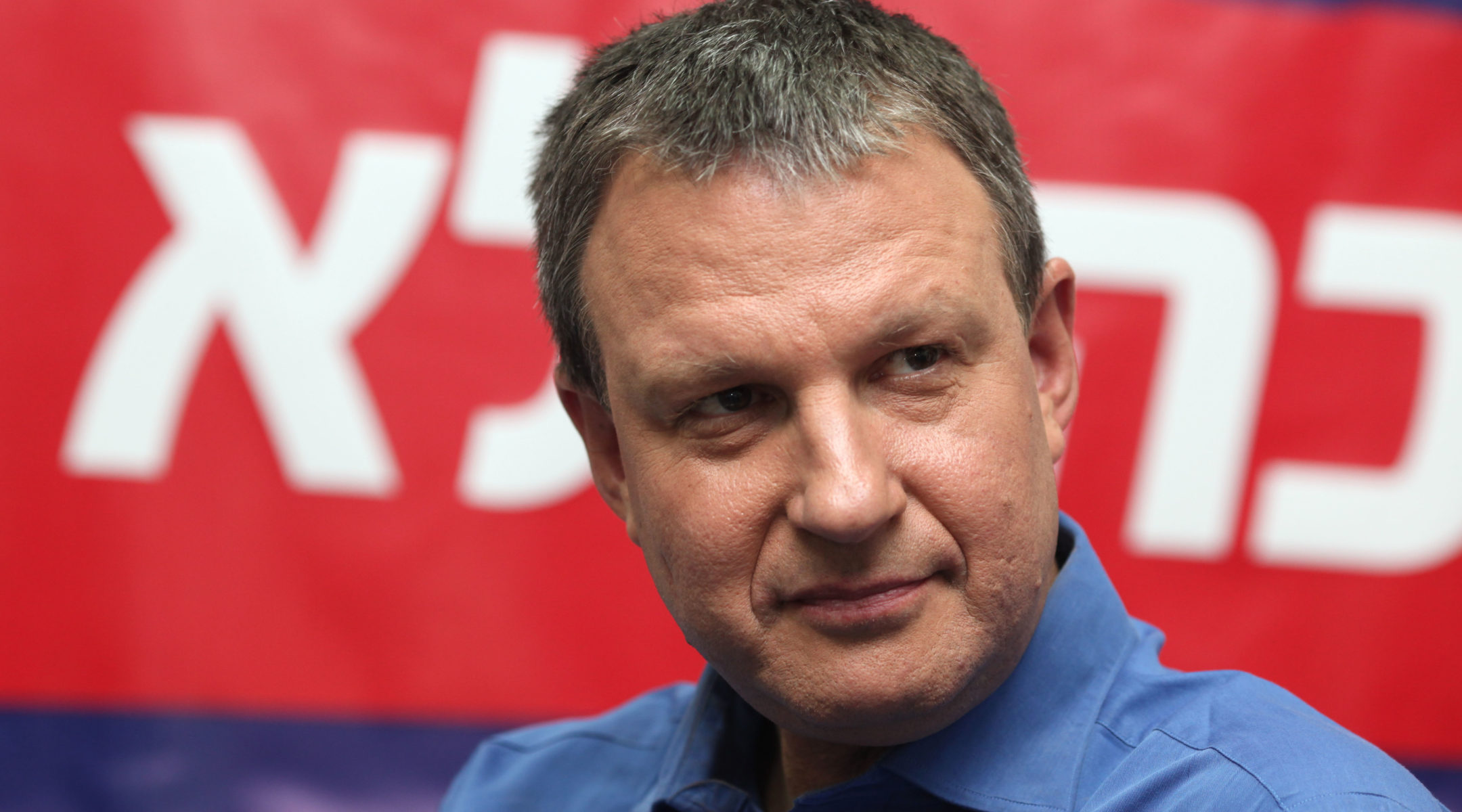 Erel Margalist, one of Israelâ€™s wealthiest and most successful venture capitalists, is a new member of Knesset from the Labor Party. (Kobi Gideon/Flash90)
Advertisement

The American-born Rabbi Dov Lipman of the Yesh Atid party says there is no contradiction between working, serving the country and being haredi Orthodox. (Yossi Zeliger/Flash90)

Though lesser known, many of the other new faces in the Knesset are no less interesting. Meet five of them: a woman with a doctorate in Talmud, an Ethiopian immigrant, a mother of 11 from Hebron, a socially conscious venture capitalist and an American-born rabbi.

He’s a haredi Orthodox rabbi in a party calling for haredi army service. He’s been an advocate for coexistence in a city fraught with interreligious conflict. Soon he’ll be the first American-born member of Israel’s Knesset since Meir Kahane.

Dov Lipman, 41, originally from Silver Spring, Md., was a Jewish educator in Cincinnati and Maryland before moving to Israel with his family in 2004. They ended up in Beit Shemesh, a Jerusalem suburb with a large haredi and Anglophone population that also has been a flashpoint for conflict between haredi and Modern Orthodox Israelis. As the city’s conflicts escalated in recent years, Lipman tried to serve as a bridge between the two sides.

He says he believes that there’s no contradiction between working, serving the country and being haredi, and he wants to bring that ethic to Israel. It’s a challenge: Many of Israel’s haredim are unemployed, few serve in the Israeli military and many are avowedly non-Zionist.

“In America, haredim have education, there are opportunities and they work,” Lipman told JTA. “That issue bothers us more because we know there’s no contradiction.”

Lipman hopes his presence in Yesh Atid — the party campaigned for universal national service, including haredim — will allow him to help integrate haredi Israelis into the rest of Israeli society.

Leading up to Election Day, few expected Lipman, No. 17 on the Yesh Atid ticket, to land a seat in Knesset. But Yesh Atid campaigned hard. Every night, it seemed, Lipman hosted a parlor meeting for English-speaking Israelis, participating in English-language debates or blogging on the English news site the Times of Israel.

When Yesh Atid won 19 seats, Lipman was in.

Ruth Calderon, 51, is a Jewish scholar who, like Lipman, advocates interreligious understanding. But unlike Lipman and most Jewish scholars in Israel, Calderon earned her degree at a university, not a yeshiva.

But that didn’t stop her from starting one. Calderon, who holds a doctorate in Talmud from Jerusalem’s Hebrew University, founded the Elul Beit Midrash in Jerusalem in 1989, one of the city’s first Jewish study houses where secular and religious Israelis can study and discuss Judaism together. More recently, Calderon founded Alma, a center for Hebrew culture in Tel Aviv with a mission to combine Jewish, Israeli and universal culture.

Calderon calls herself a “non-halachic person,” but that doesn’t stop her from posting daily passages from the Mishnah on her Facebook page. She also hosted “Hacheder,” a television program in which she discussed Hebrew culture with guests.

The Labor Party’s campaign this year, driven by party Chairwoman Shelly Yachimovich, was to strengthen middle-class and poor Israelis. One of the campaign’s central slogans declared that Israeli Prime Minister Benjamin Netanyahu “is good for rich people. Shelly is good for you,” and one of the party’s most public new faces was 2011 social protest leader Stav Shaffir.

Now one of the party’s freshmen is one of Israel’s wealthiest and most successful venture capitalists.

Erel Margalit, 51, founder of Jerusalem Venture Partners, has been declared “king of the exits” by The Marker, Haaretz’s business magazine. From 2000 to 2010, he presided over seven $100 million exits, or sales of stakes in companies — the most in Israel.

But Labor’s social-democratic values speak to Margalit. He grew up on a kibbutz and in 2002 founded JVP Community, a fund to address social issues in Jerusalem. One of its flagship programs is Bakehila (Hebrew for “in the community”), which organizes educational programs for disadvantaged Jewish and Arab children.

After Labor split and fell to a historic nadir of eight seats in 2011, Margalit founded the Labor Now organization to recruit new members to the party and reinvigorate its values. He ran for the party chairmanship that year but dropped out of the race.

“We should have expressed ourselves more clearly over our foreign policy agenda,” he said, according to the daily Israel Hayom.

As a child, Margalit lived for two years in Detroit. He later earned a doctorate in philosophy from Columbia University.

Orit Struk, who comes from one of the most ideological communities in the West Bank, will have to pass through a checkpoint or two on her commute to her new job in the Knesset. She lives in Hebron, where she runs the Jewish community’s legal and diplomatic division and has made her home for 30 years.

A mother of 11 and grandmother of 12, Struk also is the founder and chairwoman of Human Rights in Yesha, an organization that advocates for settlers’ rights. In that capacity, Struk has fought against alleged abuse of settlers by soldiers and policemen, and advocated for the rights of those who protested Israel’s withdrawal from Gaza in 2005.

Struk, 52, also runs the Land of Israel lobby in the Knesset that fought for settlement expansion and legalizing settlement outposts.

Days before the election, in the wake of the release of a video of Jeremy Gimpel, another Jewish Home candidate, speaking enthusiastically about the Dome of the Rock exploding, Struk said, “We pray that the Temple will rise again in Jerusalem.”

Struk at times was described as a liability in Bennett’s campaign to present Jewish Home as an inclusive right-wing party, not a settlers’ party. But in an interview shortly before the election with Israel’s Channel 2, Bennett denied she was a liability.

“I’m not hiding Orit Struk,” he said. “In every party, people vote with their conscience and it’s OK that among 15 people, we’ll have a representative of the right.”

Shimon Solomon, 44, has come a long way to the Knesset. When he was 12, Solomon set out on foot with his family from Ethiopia, traveling via Sudan to Israel.

Later, after becoming a social worker, he returned to Addis Ababa, Ethiopia’s capital, from 2005 to 2007 to help others follow in his footsteps. He also works with Physicians for Human Rights as an advocate for refugees and is a former director of the Agahozo-Shalom Youth Village in Rwanda, a center for orphans of the Rwandan genocide.

The future of refugees and migrants in Israel has been a topic of heated debate over the last year or two.

“He reminds me of my father,” said Lapid, the Yesh Atid chairman and son of late Israeli politician Tommy Lapid, as he introduced Solomon as a candidate in November. “My father was an immigrant. He came here in a ship from another country without knowing a word of Hebrew. And like Shimon, when he set foot in Israel, it became his.”

Solomon responded by promoting an ethic of service. “Everyone needs to give of what he has, even if he doesn’t have much,” he said.

Solomon served in the Israeli Defense Forces’ paratroopers unit and is a reserve officer. He is one of two Ethiopians on Yesh Atid’s list along with Pnina Tamnu-Shata, the first Ethiopian woman to be elected to the Knesset.