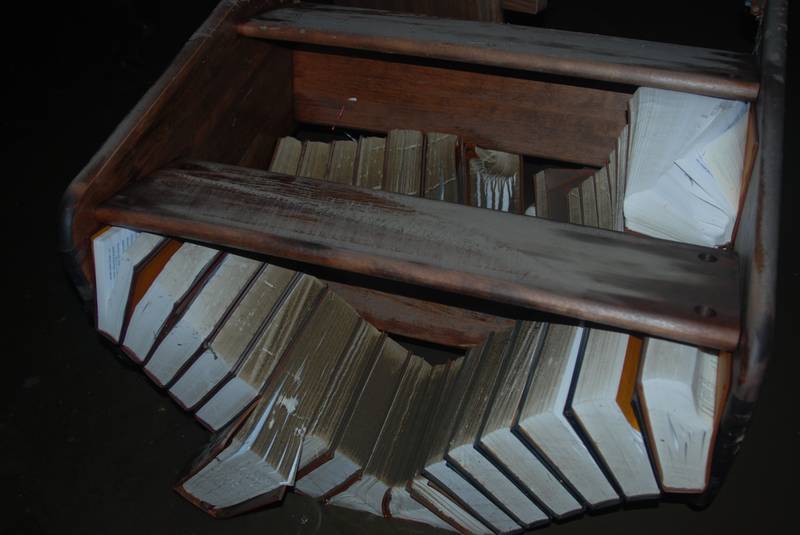 WASHINGTON (JTA) — How essential is a house of worship to a neighborhood?

That’s the crux of a question now exercising Congress as a bill advances that would provide direct relief to synagogues and churches damaged by superstorm Sandy last October.

The bill, which passed the U.S. House of Representatives last week by a vote of 354-72 with strong bipartisan support, adds houses of worship to those defined as a “private nonprofit facility that provides essential services of a governmental nature to the general public.”

The Federal Emergency Management Agency has withheld funding for houses of worship, citing constitutional separations of church and state. FEMA, which fiercely opposes the bill, wrote in a backgrounder distributed to congressional offices and obtained by JTA that “churches, synagogues, mosques and other houses of worship” cannot “be broadly considered to provide ‘essential services of a governmental nature.’ ”

Despite the strength of its House approval, the bill has stirred controversy, but the divisions are novel: Instead of the classic disagreements engendered by church-state arguments, this one has liberal Democrats disagreeing and the two major Jewish civil rights groups on opposite sides.

The American Jewish Committee joined lobbying on behalf of the bill along with a number of other Jewish groups, including the Orthodox Union, Agudath Israel of America, the National Council of Young Israel and the Jewish Federations of North America. The Anti-Defamation League is opposed. The Reform movement, meanwhile, has been careful not to take a position, noting its disagreement with such funding in the past but not weighing in this time.

“In general, we have serious constitutional concerns about this type of funding,” Sean Thibault, a spokesman for the Religious Action Center of Reform Judaism, said in a Jan. 10 statement. “However, we recognize that this aid is, in certain respects, distinct from other forms of aid that we have historically opposed. We continue to work with congregations to help them understand the varied constitutional and policy concerns before each synagogue makes their own decisions.”

Rabbi David Bauman of Temple Israel in Long Beach, N.Y., said his synagogue suffered $5 million damage from Sandy and that the disrepair bled into the wider community. Religious school students who have not met for months recently gathered in each other’s homes for smaller tutorials — a situation that Bauman said is “not ideal.”

The local Alcoholics Anonymous group hasn’t had a place to meet since the synagogue social hall was ruined in the storm. “Those people need to come together,” Bauman said, noting that he was searching for an alternative venue.

Such services are why houses of worship should be as eligible as other community service organizations, says Nathan Diament, who helms the Orthodox Union’s Washington operation.

“Already among the private non-profits eligible for FEMA’s aid are community centers, and FEMA’s definition of community centers are places where people gather to engage in educational and social and enrichment activities,” Diament said. “FEMA then decided on its own that if those activities are done in a house of worship, they are not eligible. What we are seeking to legislate is government neutrality and equal treatment.”

Rep. Grace Meng (D-N.Y.), whose congressional district includes much of the borough of Queens, co-sponsored the bill with Rep. Chris Smith (R-N.Y.). In an interview, Meng said she co-sponsored the bill because some 200 institutions in the New York-New Jersey region had been devastated but were still providing critical relief for neighbors.

“They were one of the first ones to open up their doors and feed people at the same time their electricity was out or their floors were ruined,” Meng told JTA.

The Orthodox Union has estimated that some 60 to 70 synagogues in New York and New Jersey of all denominations have been affected.

Rep. Jerrold Nadler (D-N.Y.), whose district covers much of Manhattan and parts of Brooklyn, vociferously opposes the bill, which he said would amount to government funding of religion.

“This bill would direct federal taxpayer dollars to the reconstruction of houses of worship,” Nadler said in remarks quoted by NY1, a cable news channel. “The idea that taxpayer money can be used to build a religious sanctuary or an altar has consistently been held unconstitutional.”

Those concerns were echoed by the ADL in its statement issued Jan. 4.

“Houses of worship are special — not like other non-profits and not like other buildings,” it said. “They receive special constitutional protections from government interference, special tax-exempt benefits for contributions and have special restrictions that prohibit direct public funding.”

Such concerns, also expressed by the American Civil Liberties Union, are misplaced, according to Marc Stern, AJC’s associate general counsel. He noted FEMA-directed relief for a church damaged in the 1995 Oklahoma City bombing of a neighboring federal building, as well as relief for a Jewish day school hit in the 2001 Seattle earthquake.

“The ACLU-ADL position is a little bit odd,” he said. “You can pay for rebuilding a zoo, but houses of worship are not eligible.”

FEMA in its briefing for lawmakers said the precedents cited by Stern and others do not hold in this case. In the Oklahoma City case, the agency said, the congressional appropriation made it clear that the funding for the damaged church was a one-time exception. In the Seattle case, the money was applied to a school, not a house of worship.

“In contrast, a house of worship such as a synagogue is not an educational facility, nor does it fall within one of the other categories of facility specifically listed” under prior law, FEMA said.

Meng said FEMA easily could assess whether a house of worship was seeking funds to advance religion or to provide a community service in the same way it assesses whether homeowners are eligible.