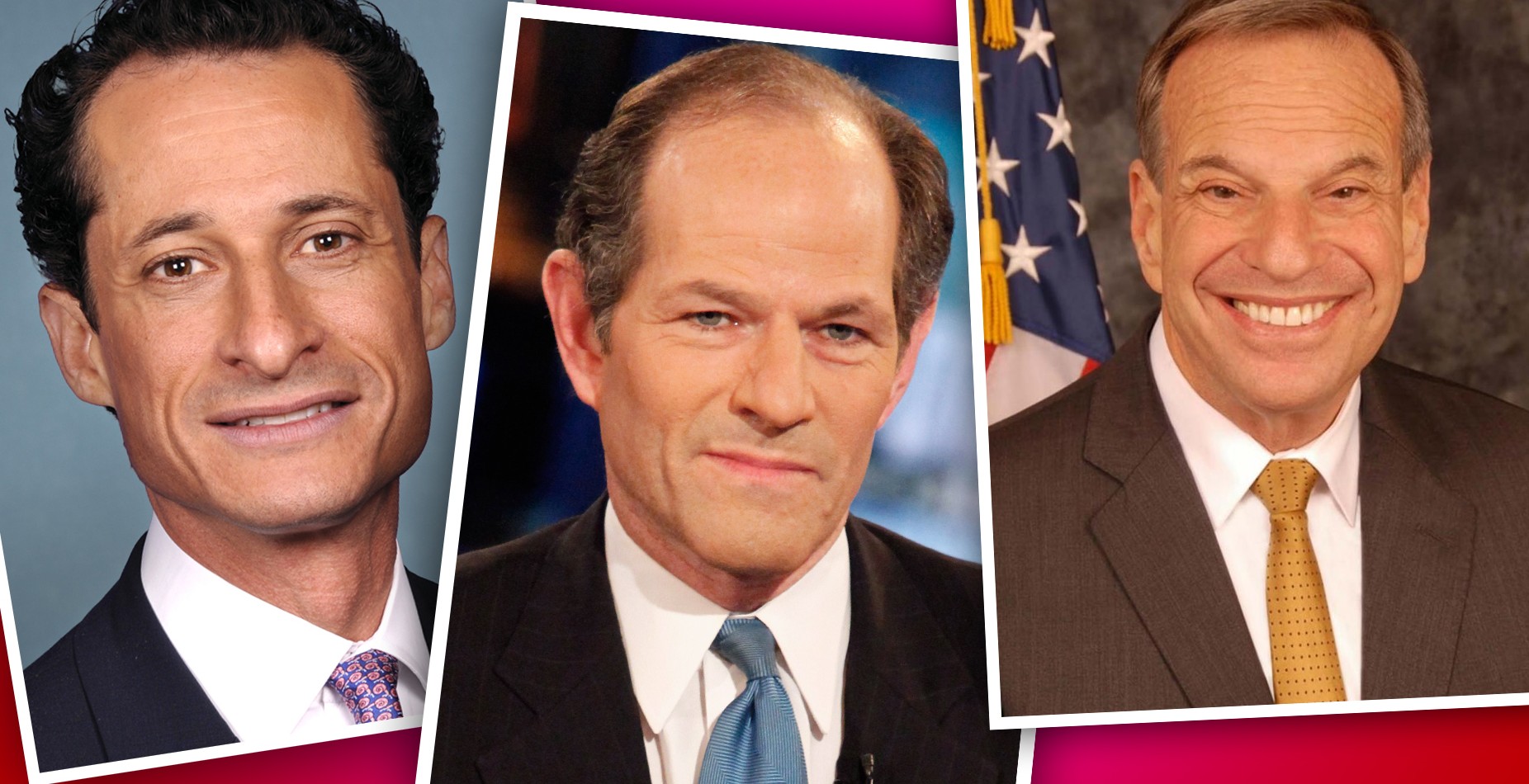 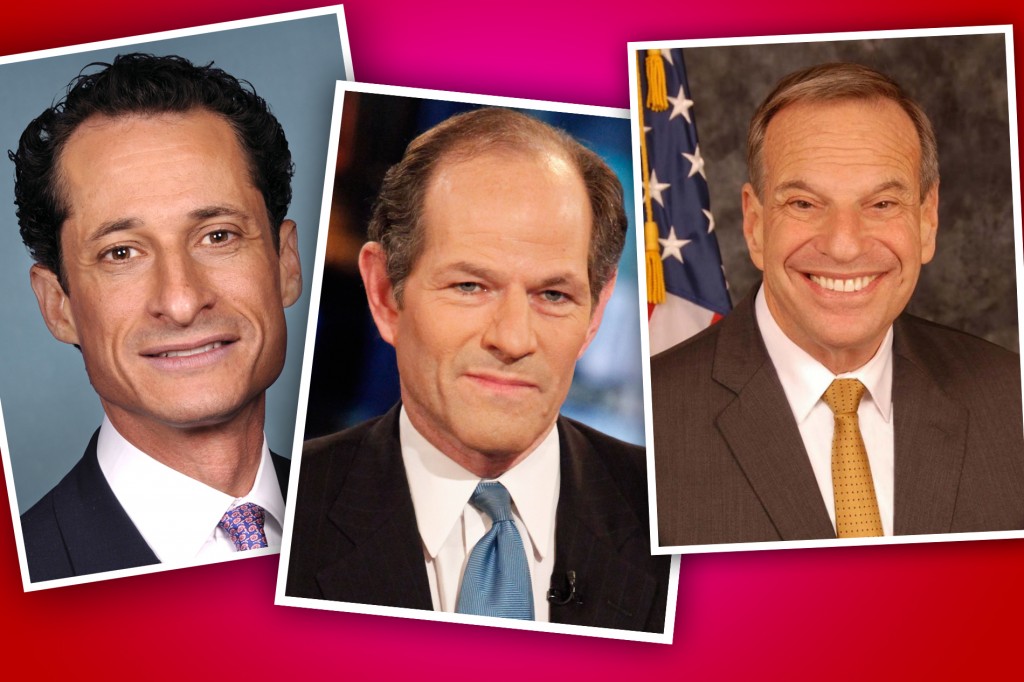 What is it with these male politicos? And why are they all Jewish?

The cloistered community that is Washington’s Jewish elite collectively choked a little Saturday morning as it progressed through a column in which Gail Collins of The New York Times named the protagonists of what she dubbed the “Weiner Spitzer summer.”

“Ever since the Clinton impeachment crisis, we’ve been discovering how much personal misbehavior we’re prepared to ignore in elected officials,” Collins wrote. “Hypocrisy, for sure. Adultery, definitely. Chronic lying, maybe. Financial skullduggery, possibly.”

Those seeking absolution this month for past misdeeds include Anthony Weiner, now running for New York mayor, who quit Congress in 2011 after he was caught saluting a female Twitter fan in his boxer briefs; Eliot Spitzer, now in a bid to be Gotham’s comptroller, who quit as the state’s governor in 2008 after the revelation that he patronized high-priced call girls — and allegedly kept his knee-highs on while doing so; and Bob Filner, who quit Congress last year to become San Diego’s first Democratic mayor in 20 years and is now facing a welter of sexual harassment claims, including allegations involving something called the “Filner headlock.”

Collins also bewilderingly brought in the bewildering case of Rep. Steve Cohen (D-Tenn.), who was caught tweeting and deleting messages to a bikini model during the State of the Union address in February. Turns out she was his recently discovered love child. Then it was discovered she wasn’t. Then he commented on the looks of a reporter who asked him about the situation.

In her column, Collins did not identify the protagonists as Jewish, but their collective appearance in print unsettled Jewish political players who were whispering their names at social gatherings over the weekend.

“If we need a reminder of how Jews are like everyone else, this is a useful one,” said Ann Lewis, who as White House communications director managed the fallout from President Bill Clinton’s sex scandal and whose brother, former Massachusetts congressman Barney Frank, was caught up in a scandal in the 1980s involving a gay escort. “It does help bring us down to earth.”

Unlike other lawmakers caught in scandal, Lewis said, Jewish politicos are less likely to face the charges of hypocrisy that have afflicted others caught with their pants down.

“Jewish politicians by and large have not been huge advocates of patrolling other people’s sex lives,” Lewis said.

The cases all have their own particularities.

Spitzer’s lapses were crimes, though he was never prosecuted for them. Filner’s might yet land him in court; his former communications director said this week that she was suing the mayor for sexual harassment. Weiner’s is just bizarre, though no one has suggested it is criminal. And Cohen’s appears to be the rare case of smoke being just smoke, sans fire.

Filner thus far has rejected calls for his resignation, while Spitzer and Weiner are both trying to rehabilitate their political careers after retreating from the spotlight in the wake of the scandals. On Monday, however, Weiner acknowledged that he had sent more explicit photos and texts to a woman after he resigned from Congress in 2011.

Steve Cohen, a Tennessee congressman, believed bikini model Victoria Brink was his daughter, but it turned out not to be the case. (United States Congress/Facebook)

The Cohen saga began in February, when reporters noticed his tweet to bikini model Victoria Brink, who had told Cohen via Twitter that she had seen him on TV. “pleased u r watching, ilu,” he replied, using the shorthand for “I love you.”

The unmarried Cohen had a relationship with Brink’s mother, who had told the congressman that the model was his daughter. CNN reported last week, however, that a DNA test showed Cohen and Brink are not related.

Asked about the situation by a young female reporter, Cohen said, “You’re very attractive, but I’m not talking about it.” Cohen almost immediately sought out the reporter to apologize, saying he had not meant anything untoward.

Political observers attribute the various scandals to the same factors that have led other politicians into the halls of shame: arrogance, insularity and just plain loneliness.

“Anyone who wants to run for Congress has to be a little bit crazy, and that includes Jewish members of Congress,” said a longtime Capitol Hill staffer who has worked for a number of Jewish lawmakers — none tinged by scandal.

The perpetual fundraising, unfettered accolades from supporters and the rarity of staffers who push back when a boss crosses the line insulate lawmakers from reality checks, according to a number of Hill staffers. The rigors of living one’s life under the constant glare of media scrutiny may also be a factor.

“When people are separated from their families for a long period of time, things occur that wouldn’t necessarily occur if your family was there,” said Robert Wexler, a former congressman who described his first months in Washington as hellish, eventually leading to his decision to move his family north so he could spend more time with them.

The move was not without a price. In 2008, Wexler came under fire when it was revealed he no longer maintained a residence in his Florida constituency.

“Eventually, your political opponent will claim you are of Washington,” he said.

Sex scandals have not always sounded the death knell for political careers. 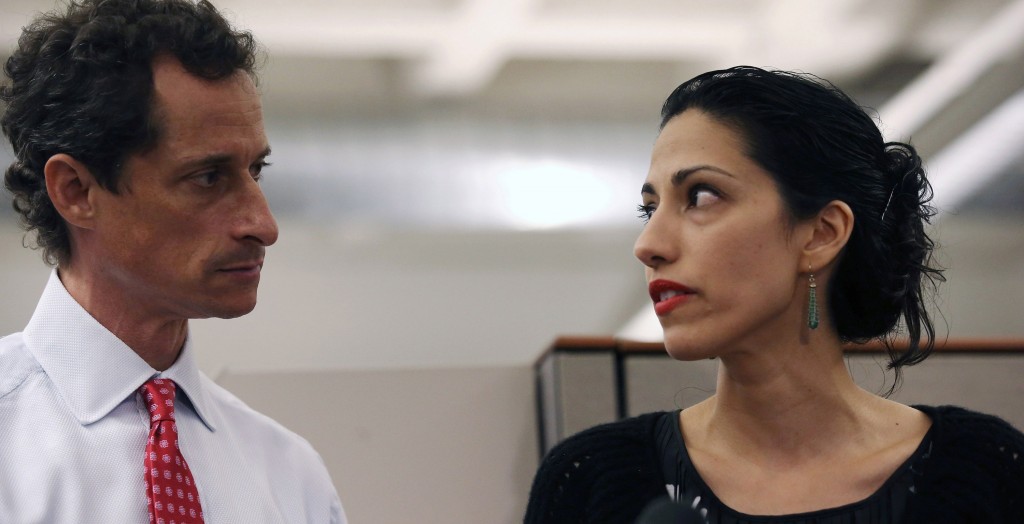 New York mayoral candidate Anthony Weiner and wife Huma Abedin at a news conference in New York City at which Weiner acknowledged that he engaged in lewd online conversations with a woman after his resignation from Congress, July 23, 2013. (Photo by John Moore/Getty Images)

Frank continued to serve in Congress for more than two decades after revelations that he patronized a male escort and then hired him as a personal aide. Weiner is leading in several recent polls, and has never polled lower than second since declaring his candidacy in May. And Spitzer enjoys a commanding lead over his Democratic primary opponent, Scott Stringer, the Jewish Manhattan borough president.

“It’s not the end of the world,” Lewis said. “They have a lot of work to do, but if I go back and think about Jewish tradition, you are encouraged to give people another chance.”

But the scandals have certainly exacted a price. Barbara Goldberg Goldman, a leading Democratic fundraiser, said the Weiner scandal was a factor in her decision to fundraise for one of his opponents, City Council Speaker Christine Quinn.

“Because I am Jewish, because I am a Democrat and I am active in that arena, I see it as a tragedy” that Weiner and Spitzer are running again, Goldman said.

“There are many fine qualified candidates out there who do not come with the baggage,” she said. “Find another day job. It’s chutzpah.”