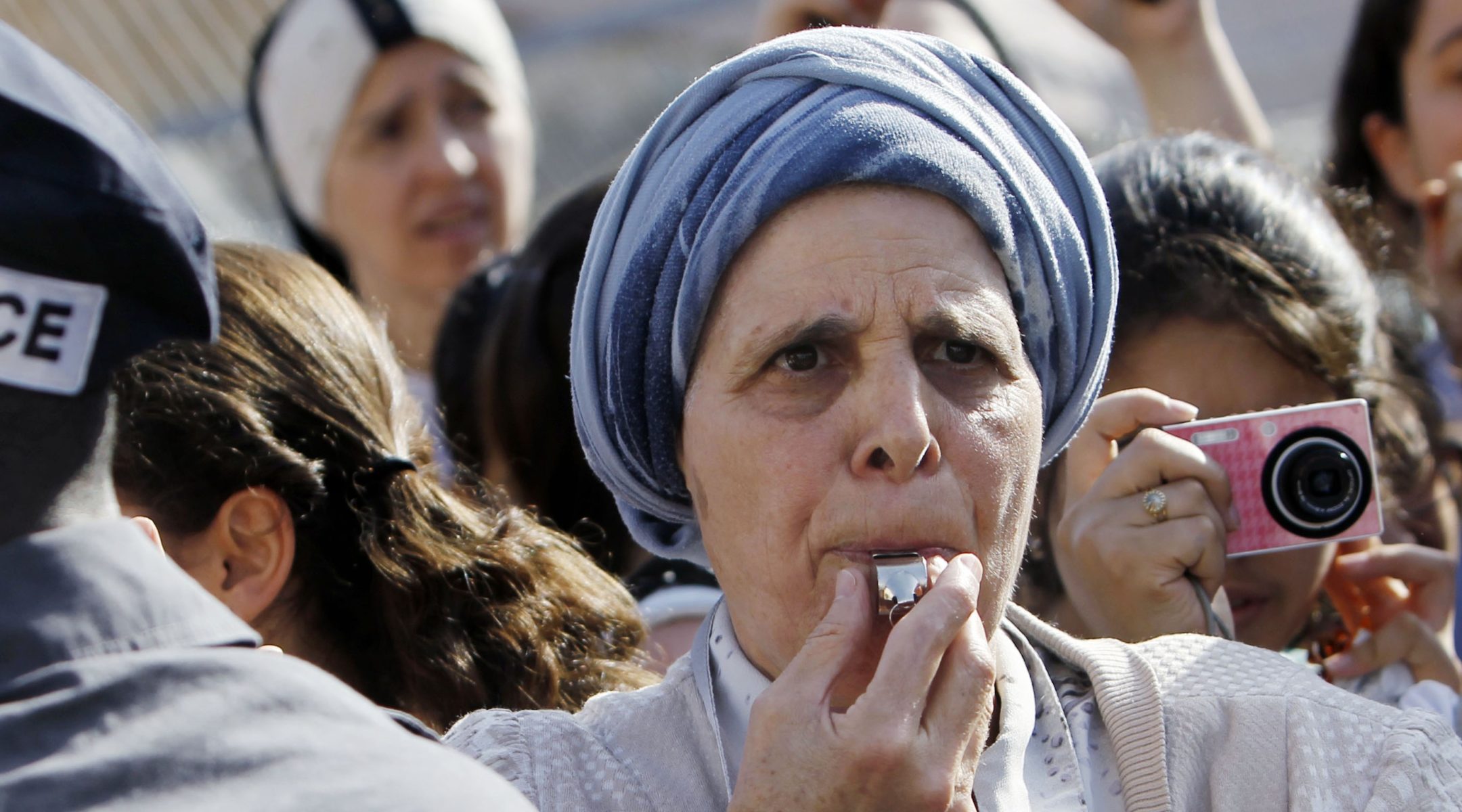 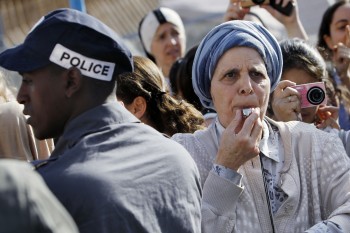 JERUSALEM (JTA) — On the morning of July 8, at the beginning of the Hebrew month of Av, the Western Wall plaza was a cacophonous mess.

Women of the Wall, the activist group that holds women’s prayer services each month at the site known as the Kotel, loudly sang festive prayers at a spot far from the wall itself. Police had barricaded them there, ostensibly for their own protection. A few feet away, a group of haredi Orthodox boys shouted at them, called them Nazis, blew whistles, waved signs and raised a primal scream. A few threw eggs.

But the biggest group on hand that morning was a crowd of some 5,00o to 7,000 young women standing silently in the women’s prayer area, far from the brouhaha and inaudible and invisible from where Women of the Wall were praying. Filling the women’s section and spilling out into the wider plaza, the girls each prayed on their own. When they were done, they left without raising their voices.

“Our goal is to give voice to the hundreds of thousands of women who call the Kotel their spiritual home,” said Leah Aharoni, a founder of the group, called Women for the Wall, which helped organize the Orthodox women’s prayer. “They have a voice. They’re not subjugated, ignorant women.” 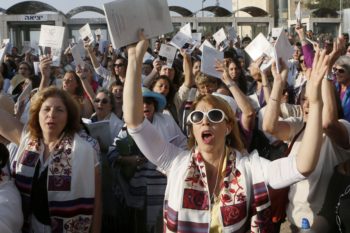 Founded less than three months ago, Women for the Wall has emerged as the public face of the traditionalists vying to maintain the status quo at the Western Wall, where rules mandate separation of the sexes and restrict the ability of women to lead public prayer groups. Women for the Wall was able to bring a critical mass of women to the site that far outnumbered the several hundred people who showed up with Women of the Wall, and the traditionalist group was able to physically block the renegade group from approaching the Kotel itself.

Women for the Wall performs a tricky balancing act between defending traditionalist values and using the language of women’s empowerment to oppose the objectives of a Jewish feminist group while presenting itself as an advocate for women’s rights.

In a community in which male rabbis often are the primary spokespeople, Aharoni hopes to galvanize Orthodox women to speak for themselves. But the success of the monthly prayer gatherings depends in large part on the endorsement and encouragement of those same rabbis.

The debate between the two women’s groups “is not a discussion between rabbis and women,” Aharoni says. “It is a conversation between women and women.”

Aharoni hardly fits the profile of what one might expect of an activist opposed to the expansion of women’s rights at the Kotel. Formerly a member of the liberal Orthodox Hebrew Institute of Riverdale, a New York congregation led by Rabbi Avi Weiss, Aharoni, a mother of six, has participated in women’s prayer groups and runs a company that fosters female entrepreneurship.

Her issue is not Jewish feminism, but decorum.

“This site has 1,700 years of tradition,” Aharoni said of the Western Wall. “It’s unthinkable for a small group to upset the tradition against the wishes of the overwhelming majority of worshipers. It doesn’t happen in the Vatican, in St. Patrick’s Cathedral in New York, in Mecca or in Westminster Abbey. And it cannot happen here, either.”

As if to underscore that theirs is the majority view, Women for the Wall have joined in efforts to bring thousands of girls to the wall each Rosh Chodesh, when Women of the Wall gather to hold their service marking the beginning of the Hebrew month.

But Women for the Wall says it is not the primary catalyst for these shows of force. That distinction belongs to the haredi Orthodox leaders who have endorsed the initiative and asked Orthodox girls’ schools to send their students.

In May, thousands of girls filled the women’s section of the plaza and much of its larger back section. In July, they packed the women’s section again. Numbers were down significantly in June — a drop-off attributed variously to final exams at the girls’ seminaries and police allegedly blocking women from entering the plaza.

Police spokesman Micky Rosenfeld told JTA that the barriers set up in June were meant to ensure only that Women of the Wall exited the space safely, not to block worshippers.

Barring a court ruling or legislative change, the monthly race between the groups is likely to continue each Rosh Chodesh (the next one falls on Aug. 7). And though the two groups do occupy some common ground — both sides reject violence and support women’s activism — both are choosing to continue the fight, with one side singing and the other silent.

“I think they’re trailblazing,” Women of the Wall chairwoman Anat Hoffman said of Women for the Wall. “They’re women supporting the rabbis, but they’re expressing their opinions in the public square. We have our struggle and they have theirs, and God bless.”