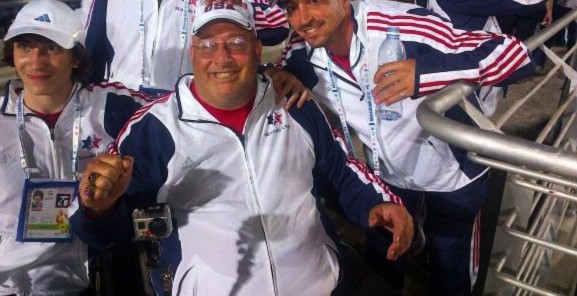 Dave Blackburn, shown at center during last week's opening ceremony, is attending the Maccabiah as a paralympian in table tennis after six previous appearances as an able-bodied softball pitcher. (Courtesy Dave Blackburn)
Advertisement 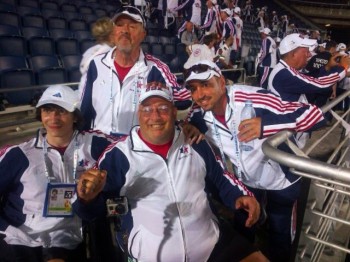 Dave Blackburn, shown at center during last week’s opening ceremony, is attending the Maccabiah as a paralympian in table tennis after six previous appearances as an able-bodied softball pitcher. (Courtesy Dave Blackburn)

RAMAT GAN, Israel (JTA) — Dave Blackburn beamed triumphantly, surrounded by a crowd of American athletes and cheering spectators. It was like old times, the great pitcher basking in applause.

But Blackburn wasn’t being ushered off the field with a championship trophy in hand as he was after leading the U.S. softball team to gold medals in four earlier Maccabiah Games.

Instead, Blackburn maneuvered his wheelchair down an aisle to the front of a reception hall earlier this month after being named one of 10 athletes to carry the U.S. contingent’s banner onto the field for the opening ceremony of the games.

The selection may have constituted Blackburn’s ultimate athletic triumph — part acknowledgment of the outsized contribution he has made to the quadrennial Jewish athletic competition, part gratitude for surviving a gruesome car accident in 2010 that took part of his right leg, broke 27 bones, put him in a coma for two months and ended his softball career.

What a career it was.

Blackburn estimates he has pitched 1,800 games — winning about 1,400 of them, including 70 no-hitters. Along with his four Maccabiah golds, he has led the U.S. team to a silver and a bronze medal at the games and been inducted into multiple softball halls of fame.

Dave Blackburn pitching for the U.S. team against Canada at the 18th Maccabiah Games in Israel, July 2009. (Facebook)

For this year’s games Blackburn, 53, was back in Israel to perform one symbolic act: toss the ceremonial first pitch at the softball gold-medal game Monday between the United States and Canada. The U.S. won, 6-2, and Blackburn had his No. 7 jersey retired at the award ceremony.

That Blackburn could do even that is remarkable. After his accident, he lay in a coma for nearly two months at a trauma center in Scottsdale, Ariz., followed by another three months at a Los Angeles hospital and 3 1/2 months at a rehabilitation center.

For a while Blackburn could not feed himself, lift his arms or move his legs. On top of all that, his mother died during his hospitalization.

“It was an incredibly emotional, rough affair,” Blackburn said.

Luckily, Blackburn suffered no spinal damage, but he still needed plenty of rehabilitation to strengthen his arms and learn how to move around in a wheelchair. The exercises likely came in handy as Blackburn embraced a new sport at this year’s games: table tennis.

Back home, Blackburn works a full schedule as a business development expert in the virtual-reality imaging field even as he continues to battle serious medical challenges. Yet he has “somehow managed to keep a positive outlook,” said Jeff Bukantz, the general chairman of Maccabi USA who first met Blackburn in 1985.

At Shabbat dinner last Friday at Kfar Hamaccabiah, Blackburn regaled Bukantz and two other guests for hours with jokes, stories and reminiscences. It was, Bukantz said, evidence of Blackburn’s “will to live, his love of life.”

“I wonder, if I’m in a life-threatening situation like that, will I be down in the dumps, morose, miserable — or will I be like Dave?” Bukantz said.

Blackburn has reveled in his first Maccabiah since the accident. At another U.S. delegation event, two days before the opening ceremony, he was asked to recite the Birkat Hagomel, the short prayer of gratitude for emerging from a life-threatening crisis.

Saying the blessing “made me feel much better, that in front of my Jewish sports friends I got to thank the Lord, in Hebrew, for saving me from what should have been this calamity,” Blackburn said.

That scene and others are being captured here for a documentary Blackburn is producing about his career, with a focus on the Maccabiah’s influence.

Its effect on him has been mighty. The Maccabi movement has enabled him to see the world — not just Israel, but also Mexico, Argentina, Venezuela and Chile for the off-year Pan-American competitions. The experiences stamped on Blackburn the ethos of Jewish brotherhood and constitute his strongest sense of Jewish identity, along with providing an important social circle for the lifelong bachelor.

His film will emphasize those themes along with a heavy dose of game footage. Blackburn’s earliest athletic influence was the 1965 contest in which his father, Ernie, pitched against Eddie Feigner, the legendary ringleader of the eponymous softball team known as the King and his Court. Blackburn remembered 5,000 spectators packing the stands near his family’s home in Hammond, Ind.

“I saw my dad in a different light. On that night, I made up my mind that I wanted to be a barnstorming pitcher, too,” Blackburn said. “My dad pitched the first four innings and struck out 11 of the 12 hitters. If you know how to pitch, the attention centered on you.”

Blackburn still commands attention, even confined to his wheelchair. Wherever he has gone this Maccabiah, Blackburn has been embraced.

“The American, Canadian, Mexican, Israeli players — I got bruises from all the hugs I got from them. I got lots of love from all my friends,” Blackburn said. “The notion of coming back to Israel — and not only being alive, but participating — that means a lot to me.”