NEW YORK (JTA) — Jazz music drifts from speakers down to the cherry wood tables of the West Cafe in Brooklyn as the Israeli artist Nurit Bar-Shai prepares to show examples of her latest work. With deft, freckled hands, she opens a manila envelope and slides three petri dishes across the table.

In the dishes are billions of Paenibaciullus vortex bacteria arranged in delicate whorls of blue. The series, which Bar-Shai calls “Objectivity [tentative],” displays “chemical tweets” of bacterial communication that expose viewers to the science behind her work while prompting them to reflect on the nature of human interaction.

“When people see bacteria working together to create these designs, they might wonder, how do I depend on others in my life?” Bar-Shai told JTA. “What do the social networks I am part of look like?”

Bar-Shai is one of a number of artists incorporating cutting-edge science into their works, anything from digital images of microorganisms to so-called visual synthesizers that combine visual and audio elements into one “synesthetic” signal.

Tech-influenced artwork has been around for decades, but recent advances have expanded the potential for using technology in artistic creation. Artists working with such media frequently offer critical perspectives on the role technology plays in an increasingly digital world.

Hinkis, who grew up in Tel Aviv, is one half of an art duo known as LoVid. Her father was an Apple employee during the company’s early years of operations in Israel.

Along with partner Kyle Lapidus, Hinkis produces work that joins digital sounds and images. In one piece inspired by tefillin,“Retzuot(ShinShinAgam),” a colorful video screen connected to a handmade synthesizer is embedded in an object fashioned from wire and fabric to look vaguely like the wooden boxes worn by observant men during morning prayers. The contraption produces sounds and colors on the screen that change as the artists manipulate an electric current.

Hinkis says it is part of an effort to “mute the consumerism” in today’s technology and bring computers back to their “hackable” roots.

“Nowadays, hardware is hidden and discreet,” she told JTA. “As we progress there is less accessibility in mainstream technology. We celebrate technology, but we’re looking for further possibilities. Not everything has to be boxed and sold.” 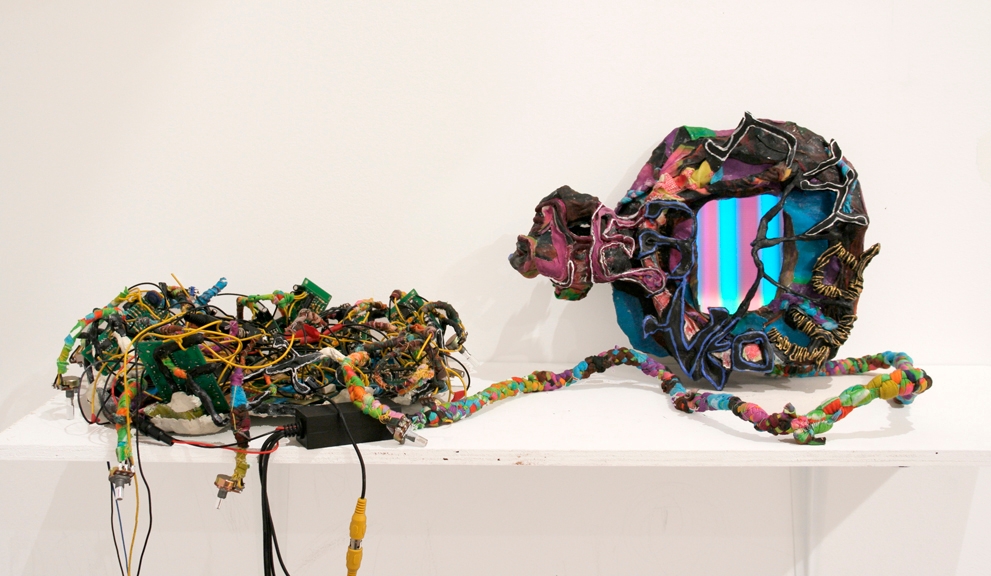 Cynthia Beth Rubin, a faculty member at the Rhode Island School of Design, uses digital technology to give audiences new ways to engage with ancient texts.

Her exhibition, “Layered Histories,” created in collaboration with rabbi and composer Bob Gluck, uses leafs from the Marseilles Bible, an illuminated Bible written in 1260 in Toledo, Spain. The Bible vanished from 1492 to 1894, when it was found in the Marseilles municipal library, and Rubin and Gluck sought to create an “imagined history” of those mysterious centuries.

The exhibit centers on a specially designed tablet computer that enables viewers to interact visually with the Bible. Using a specially designed pointer, users can touch images on the tablet, causing digitally altered images inspired by the Bible’s wanderings to project onto a screen, accompanied by music meant to replicate the sound of communal recitation.

Since 2003, the exhibition has been presented in Florida, Connecticut, Rhode Island and at the Jewish museum in Prague.

“I wanted to show people what was hidden in the natural scenes they usually see,” Rubin told JTA. “My goal is to educate them about science and to show them new perspectives, ones you wouldn’t normally expect from a smartphone.”

Hinkis and Lapidus also have utilized smartphone apps to jar audiences from their usual perspectives. The pair created an app called iParade, which uses GPS location technology to create what they call “locative artworks.”

Users download an app with a map that directs them to a particular place. Once there, a video filmed in that place becomes available to view on the phone. The videos are based around streets and buildings in New York and Chicago.

“Technology has become so easy that we’re obsessed with it, but we forget how much it affects us,” Hinkis said. “We want to open people’s eyes to what else is possible and could be possible.” 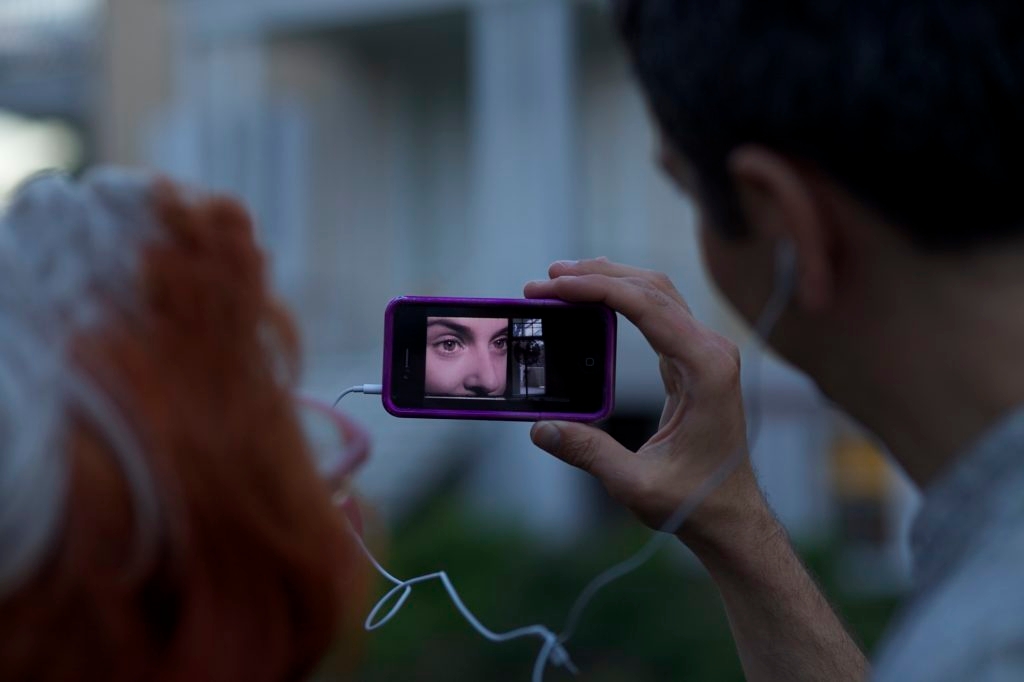