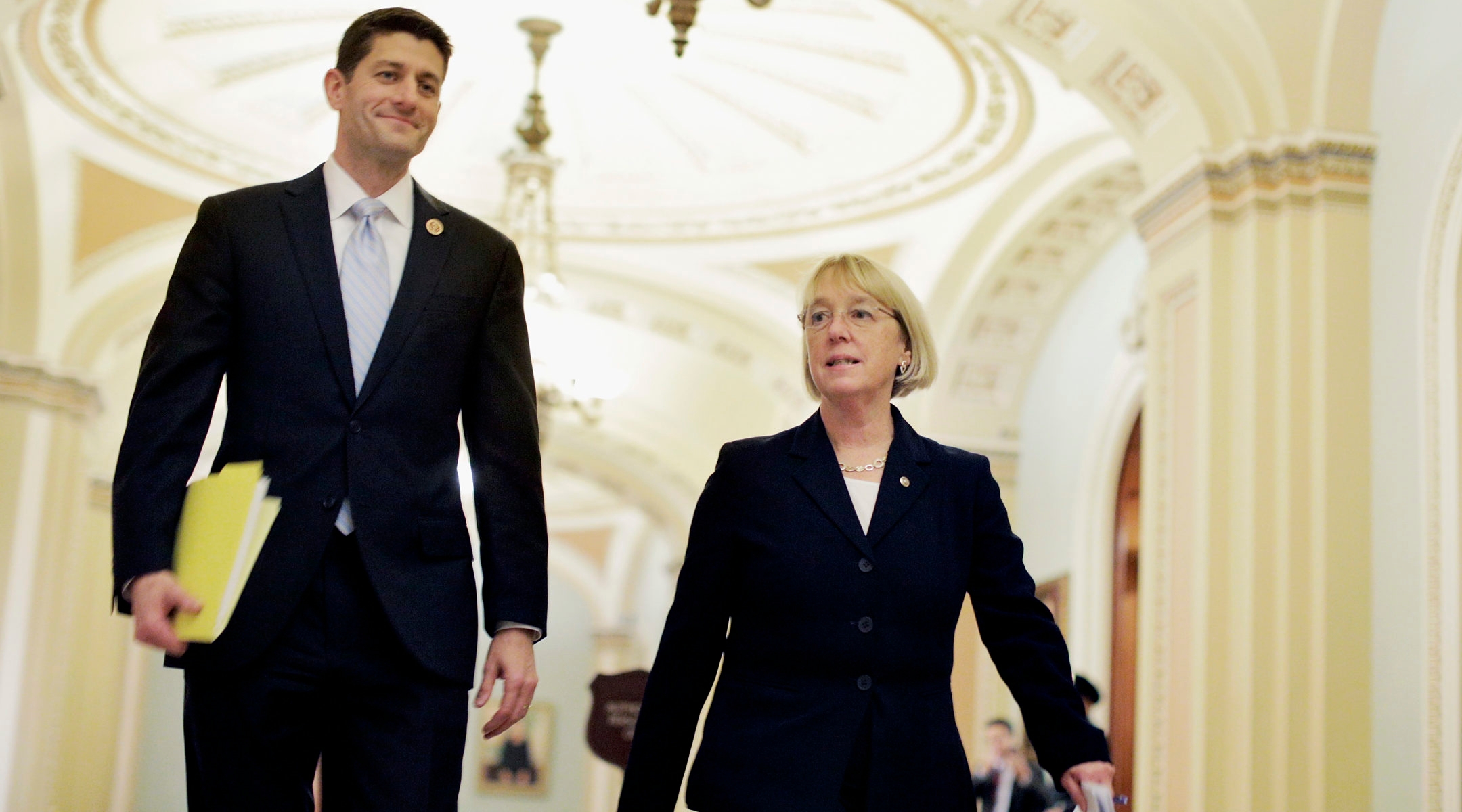 WASHINGTON (JTA) — For Jewish and pro-Israel groups, the congressional year is ending with an odd reversal: the prospect, however fragile, of bipartisan comity on budget issues coupled with a rare partisan disagreement on Middle Eastern policy.

The groups that deal with social welfare and justice issues are heartened, albeit warily, by the end-of-year budget forged by Rep. Paul Ryan (R-Wis.), chairman of the U.S. House of Representatives Budget Committee, and Sen. Patty Murray (D-Wash.), his Senate counterpart.

Meanwhile, pronounced differences are emerging in the bipartisan coalition that over the last decade has shaped the tough sanctions that helped compel Iran to join talks aimed at ensuring it does not obtain a nuclear weapon.

Democrats are heeding White House pleas to lay low while the talks get underway, while Republicans are eager to advance legislation that would influence any final deal.

The differences were at the heart of a breakdown last week in talks between Rep. Eric Cantor (R-Va.), the Republican majority leader in the House, and Rep. Steny Hoyer (D-Md.), the minority whip, to craft a nonbinding resolution that would have recommended additional Iran sanctions.

Hoyer, congressional insiders said, was under pressure from the White House and Democrats not to undercut sensitive talks. Additionally, Cantor’s language appeared to overreach, especially in calling for an end to Iran’s uranium enrichment capability as part of a final deal — an expectation that Obama administration officials have said is unrealistic.

The disagreement heralds a shift in how Democrats treat pro-Israel issues, according to officials of Jewish groups that have advocated a softer line in dealing with Iran.

“Mr. Hoyer obviously made a decision as a leader in his caucus that a substantial number in his caucus weren’t going to support a hawkish statement that undermines the prospects for a diplomatic solution to the Iranian nuclear program,” said Dylan Williams, the legislative director for J Street.

Lara Friedman, Americans for Peace Now’s legislative director, cited other examples of lawmakers resisting centrist and right-wing pro-Israel initiatives. They include a bill advocating visa waivers for Israelis that would permit Israel to keep in place policies that discriminate against Arab-American visitors and the confirmation earlier this year of Chuck Hagel as defense secretary over the objections of several pro-Israel groups.

“It proved that no outside group can push through its agenda,” Friedman said.

Officials from centrist pro-Israel groups said there is still robust bipartisan support for the U.S.-Israel relationship. They noted the overwhelming passage in the House this month of bills that would advance Israel’s qualitative military edge and energy cooperation with the United States, as well as agreement in the House and Senate to triple the administration’s request for funding of missile defense cooperation to nearly $300 million.

A Republican congressional staffer predicted that the Senate would consider the sanctions in 2014 even though Senate Democrats have resisted because of the renewed talks with Iran.

“As you get closer to November 2014 [and midterm elections], it’s going to be harder to keep folks from getting tough,” said the staffer, who declined to be identified because he wasn’t authorized to talk to the media.

On the domestic front, the two-year budget agreement that passed the House last week and is likely to pass this week in the Senate is being seen as a positive step after months of bickering between the two parties, including a 16-day government shutdown. But any optimism is restrained.

“Looking back at the year, to sum it up, it’s been a really bad year that just avoided getting a lot worse,” said Rachel Goldberg, director of aging policy at B’nai B’rith International, which operates 42 homes for the elderly across the United States.

Representatives of Jewish groups that deal with the social safety net caution that budgets only set broad-stroke priorities; Congress quickly could return to deadlock when it gets to the nitty-gritty of congressional spending in appropriations bills.

The proposed budget mandates a restoration of half the cuts that came about as a result of “sequestration” — the automatic spending cuts that kicked in last March when Congress missed the deadline to agree on a budget. Democrats favor including Head Start among programs that would receive restored money; Republicans want to restore defense spending.

“Are we able to restore Head Start? That’s going to be a big question,” Feldman said.

An additional strain on Jewish service providers will come when 1.3 million Americans lose unemployment insurance at the end of this year and another 2 million or so lose it during 2014, said William Daroff, the Washington director for the Jewish Federations of North America. Republicans refused to include an insurance extension in the budget deal.

“Millions of individuals will be left out in the cold, in despair,” Daroff said.

One bright spot is that the prospect of an end to the tussling over spending clears the congressional agenda for other domestic items. Chief among these for many Jewish groups is immigration.

Abby Levine, director of the Jewish Social Justice Roundtable, a coalition of 26 Jewish domestic policy groups that advocates for paths to citizenship for undocumented immigrants, said the prospect of immigration reform was bolstered this year by the passage of a comprehensive reform act in the Senate with strong bipartisan backing.

“For months since the summer we’ve been waiting for the House to act,” she said. “It’s clear that the legislation has the votes to pass.”

House leaders have not said whether they will advance the legislation; Cantor has said he favors bringing immigration legislation to the floor.

Another bright spot for liberal Jewish groups is a matter of partisan rancor: the rolling back by the Democratic-led Senate of the filibuster rule, which required a 60-vote supermajority in the 100-member Senate to advance nominations to the judiciary or to the executive branch. Now such nominations require only a simple majority. Republican senators are livid at the change.

Sammie Moshenberg, director of the Washington office of the National Council of Jewish Women, said the appointments advancing through the Senate will bring about better governance and a less-burdened judiciary. She cited as an example the Senate confirmation last week of Chai Feldblum — the daughter of a rabbi and a leading gay activist — to the Equal Opportunity Employment Commission three years after President Obama named her to the post.

Gun control is an issue backed by Jewish groups that seemed ripe for advancement a year ago after a gunman killed 20 first-graders and six adults at a school in Newtown, Conn. But within months, fierce pushback by gun rights groups, led by the National Rifle Association, diluted what had appeared to be bipartisan backing for more extensive background checks for gun buyers.

That was a major disappointment, said Rabbi Julie Schonfeld, who directs the Conservative movement’s Rabbinical Assembly.

“We passed the Newtown anniversary this month with the spectacular failure of the country to introduce even the most modest background checks,” she said.